A video showing some tense moments of the RCMP injunction enforcement at a Wet'suwet'en checkpoint last Friday is circulating online.

WARNING: Video contains images that may be disturbing to some viewers

A video showing some tense moments of the RCMP injunction enforcement at a Wet'suwet'en checkpoint last Friday is circulating online.

The RCMP have been tasked with enforcing a B.C. Supreme Court injunction to ensure people are not blocking or interfering with construction of a natural gas pipeline through the Wet'suwet'en nation's traditional territory.

Denzel Sutherland-Wilson, a 23-year-old Gitxsan man who recorded most of the footage, said the scene captured in the video took place hours after police first arrived to enforce the injunction against him and a handful of friends, including Eve Saint, daughter of the hereditary chief of that territory, Chief Woos.

The video was taken on Feb. 7, the day of the second wave of enforcement from the RCMP which resulted in four arrests, including Sutherland-Wilson at the Gidimt'en checkpoint at the 44-kilometre mark on the Morice West Forest Service Road.

The Gidimt'en checkpoint was one of several sites where the Wet'suwet'en and their supporters have been living and asserting that nobody could pass the checkpoint without the consent of the hereditary chiefs.

It was posted on the Gidimt'en checkpoint Facebook page on Wednesday.

Much of the video was shot while Sutherland-Wilson stood perched on top of a wooden tower that was constructed on top of a yellow school bus, surrounded by RCMP — including a canine unit and tactical police carrying semi-automatic guns.

The camera pans to show a member of the RCMP tactical team setting up in a position behind a flipped vehicle, steadying his scoped rifle, and fixing it in Sutherland-Wilson's direction.

That's when Sutherland-Wilson can be heard pleading to police: "There's no need to point guns at us; there is no need."

Warning: Video contains images that may be disturbing to some viewers 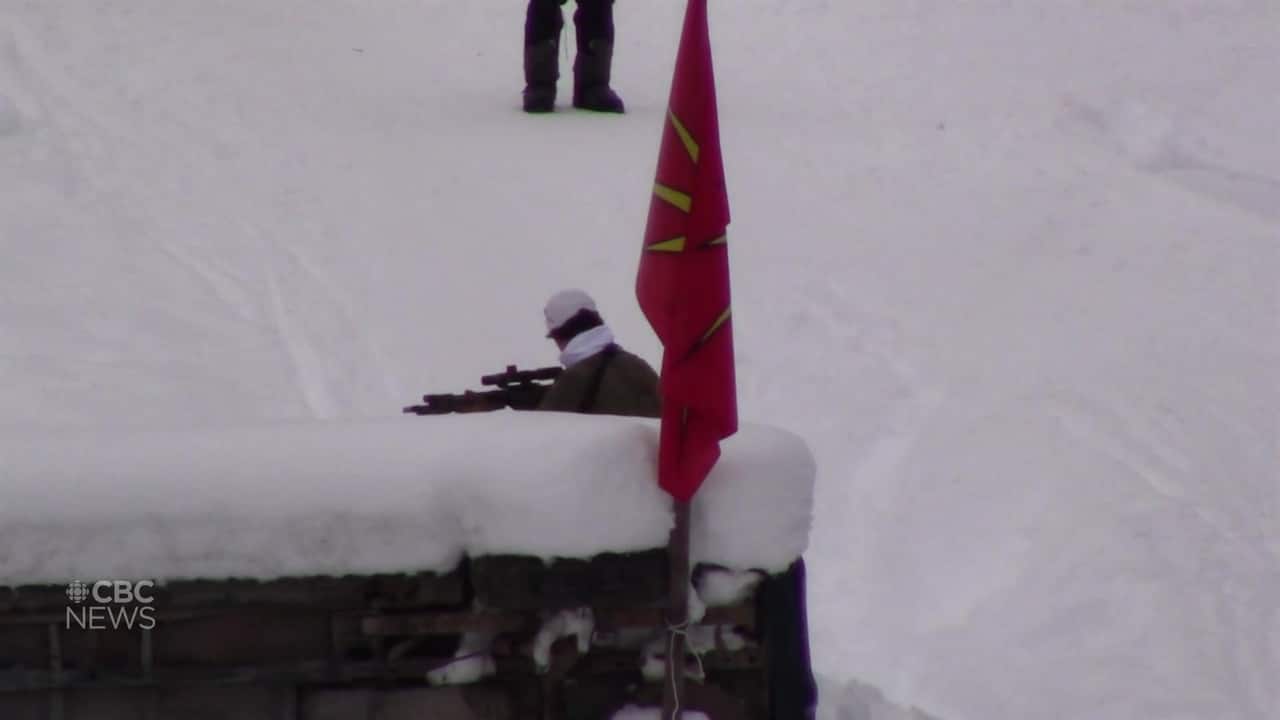 RCMP with rifle at Wet'suwet'en checkpoint

1 year ago
3:56
WARNING: Video contains images that may be disturbing to some viewers 3:56

There are moments of near silence during his pleas and the member of the tactical team can be seen shifting his position slightly, though still focused in Sutherland-Wilson's direction with his firearm.

At one point in the video Anne Spice, a longtime Wet'suwet'en supporter, can be heard shouting: "We are unarmed, we are peaceful."

In an emailed statement to CBC, media relations officer Cpl. Chris Manseau wrote, "The RCMP understands that any singled out moment of our enforcement efforts could be taken out of context and that our efforts were complex and involved multiple specialized units and personnel."

The RCMP stated that the rifle was never pointed at anyone at the checkpoint that day.

It said the tactical member of the force, seen in the video, was "using the rifle scope as a magnified observation device in a manner consistent with police training."

The statement says that particular tactical member was "tasked with providing over-watch."

Jerome Turner, a journalist who was reporting from the scene of the enforcement at the Gidimt'en checkpoint also reported seeing tactical officers pointing rifles in his direction.

In a story he wrote for Ricochet, Turner said, "this was a first for me, and I never want to have the feeling again."

'He was aiming at me'

As for Sutherland-Wilson's experience, he isn't convinced the police officer in that video wasn't pointing his rifle at him during that interaction.

"Even if he was a couple centimetres off or something, he was aiming at me,"

He also questions why, hours into the enforcement, he was experiencing that level of threat.

"There were already officers surrounding us by the time he did that."

The RCMP said in their statement to CBC News the role of the tactical member seen in the video was to "ensure no lethal threats were present" as police moved in.

It also said the tactical member's "over watch" was used to "make the area safe for arrests to proceed. Among police concerns were their understanding there were rifles in the area, which had been used for hunting "but could present a threat to police in these tense circumstances."

"As also evident by the video, there were many members below this dangerous structure and quite quickly prone to not only threats from firearms but objects that could have been thrown from above. These observations were imperative and the observing member would have been one of the few members at scene capable of making these observations."

Sutherland-Wilson said, "I couldn't be in a more open location with no possible indication that we had any sort of firearms or threats to their safety."

Overall, Sutherland-Wilson said the RCMP's account of what happened sounded "straight up ridiculous" and accused police of "trying to pass off this needless threat on our lives."

The RCMP concluded its statement to CBC by noting no one was injured during enforcement actions that day and said when people were eventually arrested it happened safely and with minimal force.

Sutherland-Wilson and three others were arrested that day at the Gidimt'en checkpoint, after an hours long face-off with police. They were arrested for violating the Coastal GasLink court injunction and were held in jail for three nights before being released.

He said he expected to be arrested that day, but wasn't ready to face potentially lethal consequences.

"That officer wanted to point his gun at me and he had all the power to do it, which is pretty messed up."

The RCMP said in its statement, "We hope that our actions will be assessed in their entirety and the need for future enforcement is not necessary."