Hereditary leaders from the Wet'suwet'en Nation in northern B.C. told the United Nations special rapporteur on the rights of Indigenous Peoples Wednesday their human rights are being violated by pipeline development on their territory.

Hereditary leaders from the Wet'suwet'en Nation in northern B.C. told the United Nations special rapporteur on the rights of Indigenous Peoples Wednesday their human rights are being violated by pipeline development on their territory.

Hereditary chief Na'moks and Freda Huson, longtime spokesperson and resident at the Unist'ot'en camp in Wet'suwet'en territory, made statements to the special rapporteur at the meeting of the UN Permanent Forum on Indigenous Issues in New York.

They expressed concern over how tensions between their leadership, Canadian institutions and industry have been playing out in recent years, asking for the UN to take specific action.

"We are troubled by the ongoing trend in Canada that the interests of corporations for natural resource extraction are superseding the rights of Indigenous people on our lands and territories," Na'moks told the rapporteur.

Na'moks asked the UN to emphasize to Canada the need to fully implement the UN Declaration on the Rights of Indigenous Peoples and that states need to recognize the human right of people to peacefully express dissent to activity in their territories without being criminalized. 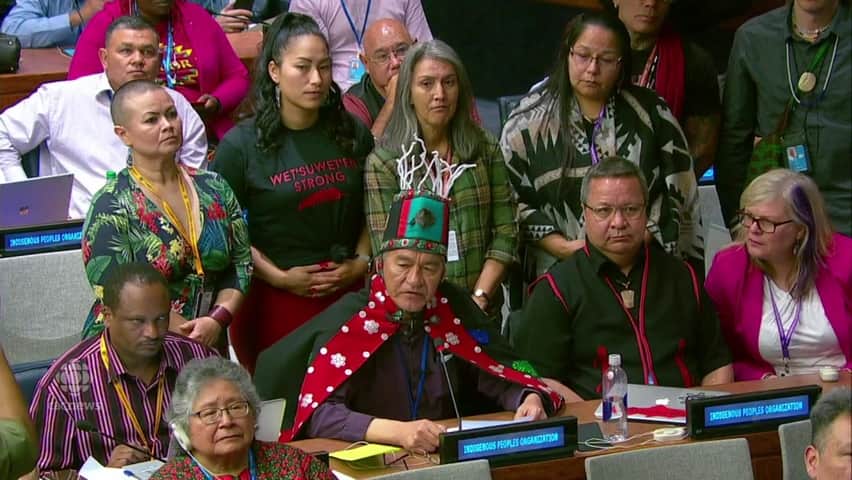 The Wet'suwet'en hereditary leadership has long maintained it does not consent to pipelines being built through the traditional territory.

The Trans-Canada-owned Coastal GasLink pipeline is part of a $40 billion project that would move natural gas extracted from northeastern B.C. to the proposed LNG Canada facility in Kitimat where the gas would be liquefied and shipped overseas. The project has secured provincial permits and approvals, as well as agreements with band governments.

Coastal GasLink and its contractors had been unable to get permission to pass the gates at the Unist'ot'en camp on Wet'suwet'en territory. The company got an interim injunction from the court in December for access, which was enforced by RCMP in January.

Fourteen people were arrested by RCMP for violating the injunction. They were facing civil contempt proceedings, but those charges were dropped on April 15. The injunction remains in effect.

In an emailed statement to CBC News on Thursday a Coastal GasLink spokesperson stated "There is strong support for this project from local and Indigenous communities along the route, including all 20 First Nations with whom we have agreements."

The company said the pipeline is part of a critical natural gas project that will meet global demands for cleaner energy.

"We remain focused on continuing to engage in constructive dialogue with local and Indigenous communities as we safely execute on this vital project," the statement said.

Wet'suwet'en hereditary leaders tell UN their laws are being broken

The Wet'suwet'en hereditary leadership maintains their laws are being broken on the territory, not Canadian laws.

"We are a government. We decide who comes on our territory. We are the hereditary chiefs. British Columbia and Canada only have presumed authority on our lands," said Na'moks.

"Indigenous legal orders and Indigenous systems of governance must be recognized and respected and not trampled upon in the interests of corporate development." 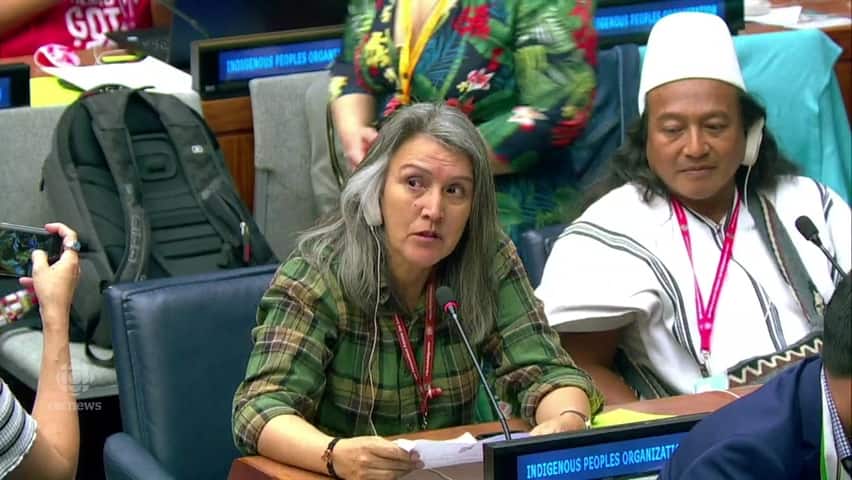 "I am here today to express concerns for human rights violations happening to my people," she said.

"The pipeline company is violating Wet'suwet'en law. Trespassing on our territory and starting to destroy the land."

Huson spoke about the history of the Unist'ot'en settlement, stating that it's a reoccupation of their territory that has grown from a small footprint on the land to a community comprised of a healing lodge, cabin and pithouse.

"We have reoccupied our lands to prevent industry from invading and polluting them from pipeline projects. We have practiced free prior and informed consent to determine who is given access to our territory," she said.

Na'moks and Huson extended an invitation to the special rapporteur to come and visit their territory. Na'moks said the rapporteur has not responded to their request but he said they will be following up on their invitation.

The rapporteur exists under the umbrella of the UN Human Rights Commission and part of their mandate includes addressing specific cases of alleged violations.

B.C. says it's in dialogue with Wet'suwet'en Nation

B.C.'s Indigenous relations ministry said it is committed to advancing meaningful reconciliation with the Wet'suwet'en Nation "with the goal of B.C. affirming Wet'suwet'en rights and title, guided by the UN Declaration on the Rights of Indigenous Peoples and Canadian jurisprudence such as the Supreme Court of Canada's Delgamuukw Gisday' Wa decision."

This dialogue between B.C. and the Wet'suwet'en hereditary leadership has only just begun and a provincial spokesperson said in an emailed statement that this process is not connected to any specific project.

The federal ministry of Crown-Indigenous Relations has not yet responded to a request for comment.