A coalition of Indigenous grassroots organizations and volunteers set up two teepees and a prospector tent in Winnipeg's core on Tuesday to help keep the homeless population warm through bitterly cold temperatures.

A coalition of Indigenous grassroots organizations and volunteers set up two teepees and a prospector tent in Winnipeg's core on Tuesday to help keep the homeless population warm through bitterly cold temperatures.

"The majority of the homeless people are our people, Indigenous people, so we want to make sure that they're safe and they have a place to come when this cold snap is here," said EJ Fontaine.

"The last thing we want to see is our people dying, freezing on the streets."

Fontaine is Anishinaabe from Sagkeeng First Nation and is the co-founder of Amik.ca, an Indigenous engagement business.

Earlier this week, his wife Eva Wilson-Fontaine was driving around the city and noticed how many people were in the bus shelters, despite the temperatures and windchill triggering extreme cold warnings.

"We see [people] all huddled into the bus shacks," said Fontaine.

To help address the situation, Wilson-Fontaine called on Winnipeg's Indigenous community to pitch in to help.

On Sunday night, the couple put a call out for donations for warm clothing. On Monday, they were able to secure an outdoor space at the Thunderbird House where they could set up a pop-up warming shelter.

By Tuesday, they were able to set up a prospector tent and two teepees, with the help of nearly two dozen volunteers.

"There's no way we could do this without the community support. All of the volunteers that are on the ground, it would not be, if it wasn't for them," said Wilson-Fontaine.

The warming space has been dubbed the "Community Caring Camp'' and has gathered items to hand out like toques, winter boots, socks and mitts.

The camp was organized and set up by volunteer co-ordinator Rylee Nepinak, with the youth group Anishiative.

"Winnipeg is not the biggest city [in Canada] and it has the highest Indigenous population. So it's very close knit. A lot of people know each other and a lot of people want to help and this is evidence of it," said Nepinak.

Groups like Anishiative, Mama Bear Clan Patrol and Community 204 have all brought out volunteers to help get the camp up and running.

The organizers recognize the pop-up shelter is a temporary solution. Nepinak would like to see a longer-term strategy to help Winnipeg's homeless population.

"Winnipeg needs to provide a lot more spaces for the people living in the streets," said Nepinak.

"There's churches, there's lots of buildings that aren't even occupied that we can definitely use to house these people. We don't need teepees. We can use those buildings. So…Winnipeg just needs to get together."

The Community Caring Camp plans to have volunteers at the pop-up site for the next two weeks. 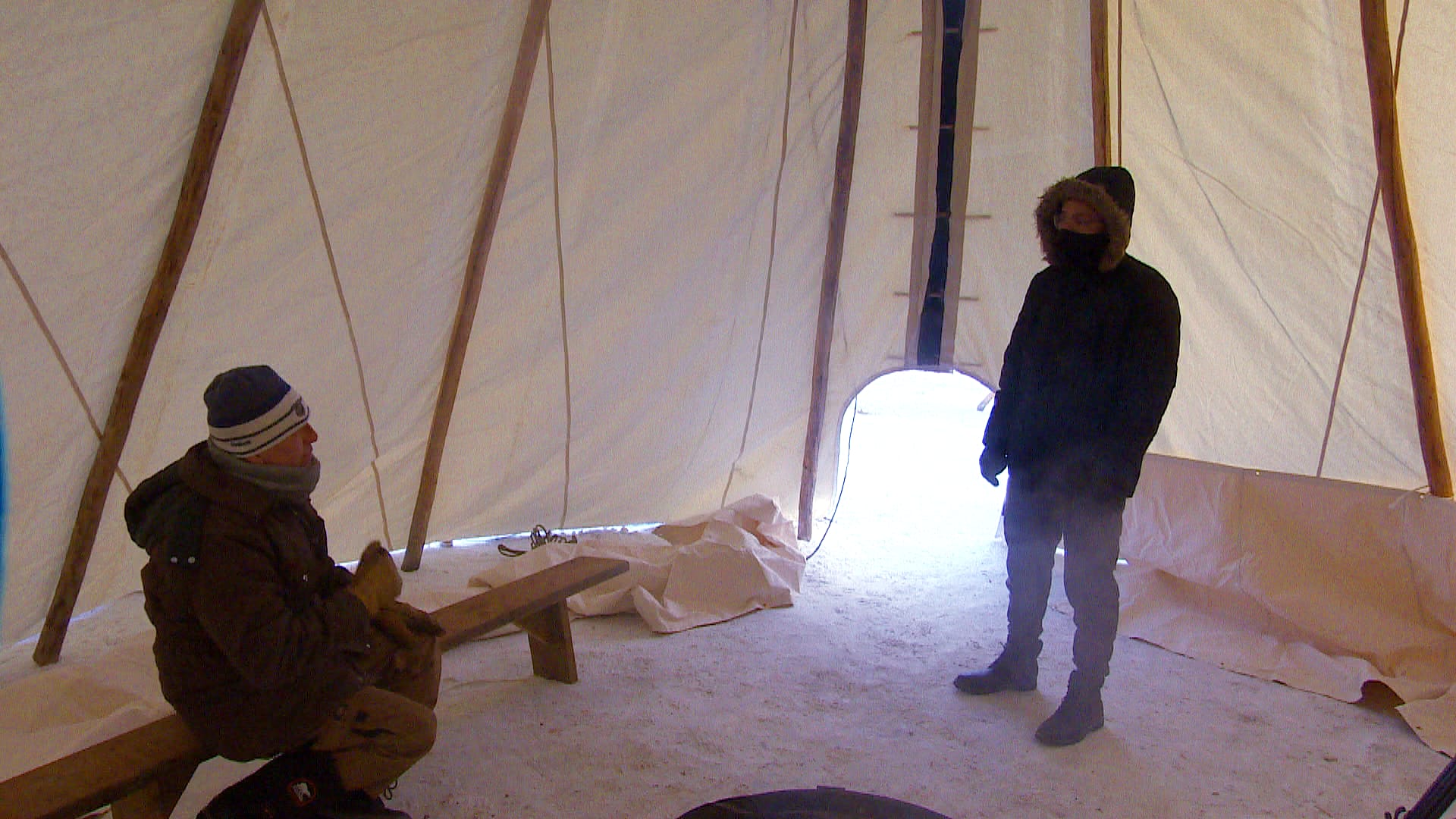 25 days ago
1:58
A coalition of Indigenous grassroots organizations and volunteers set up two teepees and a prospector tent in Winnipeg's core on Tuesday to help keep the homeless population warm through bitterly cold temperatures. 1:58