Wanbdi Wakita wanted to brighten up his friends' Facebook feeds over the holidays and he did it with help from his granddaughter's talking hamster toy. 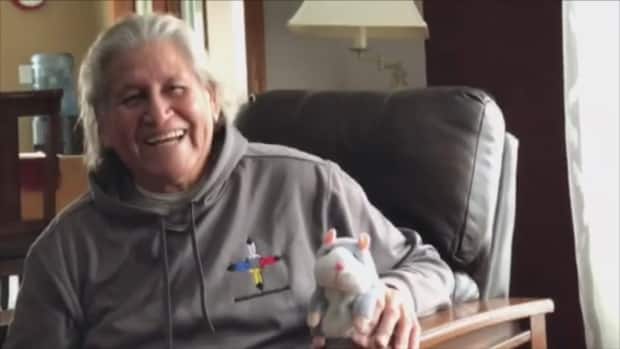 2 years ago
0:39
With a little help from a furry friend, Wanbdi Wakita filmed this light-hearted Dakota language lesson to brighten up his friends' Facebook feeds 0:39

Wanbdi Wakita wanted to brighten up his friends' Facebook feeds over the holidays and he did it with help from his granddaughter's talking hamster toy.

The video shows Wakita speaking Dakota, with the toy hamster parroting every word and eventually singing the Veterans Song.

"I'm saying 'Hi, how are you? How are you doing?' And then when I sang the song, of course he sang the song. He repeated my song… I thought that was pretty good," laughed Wakita.

He decided to post the video just to give people a light-hearted language lesson.

He said a lot of his family members are on Facebook and are using the platform to write Dakota phrases and kinship terms.

"I see lots of that going on, and I really appreciate that," said Wakita.

"That's their way of keeping the language. Every once in a while, if they are not too far off in their spelling, I try to give them a spelling correction. That's what I do."

He grew up speaking his language and started teaching the Dakota language at Brandon University in 1968. Up until this year, Wakita had taken on teaching positions every winter to teach Dakota.

The Dakota language is something that he has been able to pass on to his six children, and he said that he is still surrounded by people who are fluent in the language.

Wakita still gets a laugh from the clip and is hoping to release more language-related videos on social media in the future.