A tentative agreement has been reached to allow workers for a natural gas pipeline company to access to an area in northern B..C. that had been the focal point of First Nations opposition to a pipeline project in their traditional territory.

A tentative agreement has been reached to allow natural gas pipeline company workers to access an area in northern B..C. that had been the focal point of First Nations opposition to a pipeline project in their traditional territory.

The pipeline project is run by TransCanada Corp. and is meant to transport natural gas from northeastern B.C. to the coast, where a liquefied natural gas project is scheduled for construction.

The Unist'ot'en camp is the site of a fortified checkpoint preventing people working on the Coastal GasLink project from accessing the Wet'suwet'en territory, which sits about 300 kilometres west of Prince George, B.C.

Barriers to entering the territory were beefed up this week following news that RCMP were moving in to enforce an interim injunction order that was awarded to Coastal GasLink in December, when the company successfully argued it needed access to the road to proceed with pre-construction activities.​

The hereditary leadership of the Wet'suwet'en Nation spelled out some of the details of the tentative deal at the healing centre of the Unist'ot'en camp Wednesday afternoon.​

Wet'suwet'en hereditary Chief Namoks said all the hereditary chiefs were in agreement on how they'd like to see things go forward in the near future, out of concern for how a second wave of RCMP enforcement might unfold.

He said the last word on the agreement made among the chiefs and presented to the RCMP was up to hereditary Chief Knedebeas because it's his territory.

"He does not want any more of our people traumatized or arrested. And the trauma that has happened to the people that are there right now is our worry," said Namoks.

"It's very insulting, but it's negotiations, a give and take. We need to look after our people. But there will be no construction, that must be made very clear."

Under the tentative deal, the RCMP would agree not to enter the healing centre without permission and the Wet'suwet'en would allow workers to access the territory by Thursday 2 p.m. PT. Talks on the deal will resume Thursday morning.

Not consenting to construction

The chiefs said this development doesn't mean they're consenting to the Coastal GasLink pipeline being built through their traditional territory, rather it's a temporary solution to de-escalate things while everyone figures out their next moves.

As details of the agreement were described to those at the Unist'ot'en healing centre Wednesday it was clear people there still had concerns about their safety moving forward.

In particular, people at the centre were concerned about completely dismantling the gate to Unist'ot'en, allowing access to anyone who makes the drive up the remote logging road. The camp was first established in 2010 and has year round residents, with many  people coming to the area to reside at the healing centre.

It has also had a long-established checkpoint at the entrance to the area, a means through which the group has been enforcing their own Wet'suwet'en law and asserting that nobody can enter without the consent of the hereditary leadership.

Due to concerns raised by those in the meeting at the healing centre Wednesday evening, an agreement was made to resume talks with the RCMP about next steps on Thursday morning.

People were visibly emotional throughout the meeting, which was attended by hereditary chiefs, elders, community members and others.

Three members of the RMCP Division Liaison Team, all of whom are First Nations members of the force, were also in attendance and led the convoy of people to the camp.

The only RCMP who came to <a href="https://twitter.com/hashtag/Unistoten?src=hash&amp;ref_src=twsrc%5Etfw">#Unistoten</a> today with the hereditary chiefs et al were members of the division liaison team and all were First Nations officers who have ties to nations in BC. <a href="https://t.co/usGZft9ygq">pic.twitter.com/usGZft9ygq</a>

The Mounties have been enforcing a court injunction granting workers with the Coastal GasLink natural gas pipeline project access to a road and bridge from which they had been blocked by opponents of the project. On Monday the RCMP entered the first of two blockades and arrested 14 people.

Since then, there has been an RCMP exclusion zone in effect, meaning people cannot get to the Unist'ot'en camp without permission from RCMP. That exclusion zone police checkpoint remained in place as of Wednesday night.

In an open letter posted on the company's website, Coastal GasLink president Rick Gateman wrote it was "unfortunate the RCMP were forced to take this action." 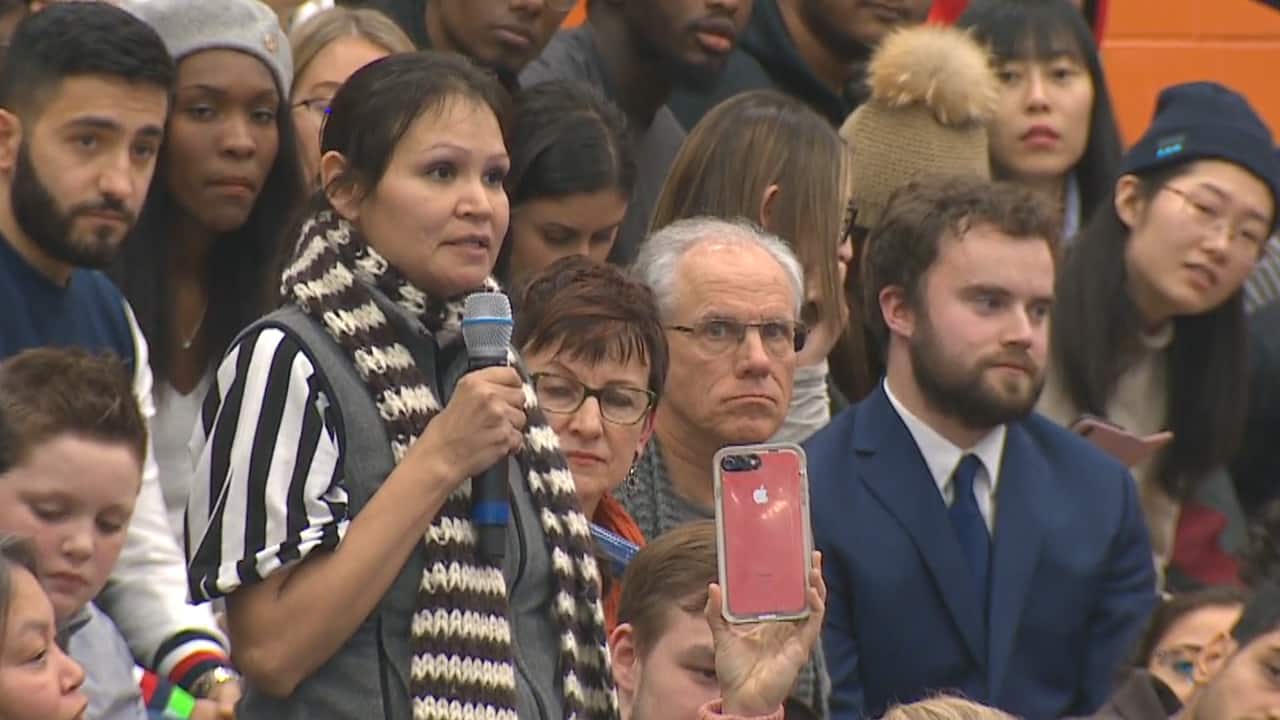 'We have consistently failed' to live up to treaty intent

2 years ago
1:33
Trudeau says Canada has a long history of treaty failure 1:33

"We took legal action as a last resort and only after six years of unsuccessful efforts to find a mutual solution," the letter reads in part.

"We respect the rights of individuals to peacefully express their point of view, as long as their activities do not disrupt or jeopardize the safety of the public, our employees, our contractors, and even themselves."

The debate around the project flared again Wednesday night, when Prime Minister Justin Trudeau faced several tough questions about the pipeline specifically, and his policies in relation to Indigenous communities more broadly during a town hall in Kamloops. 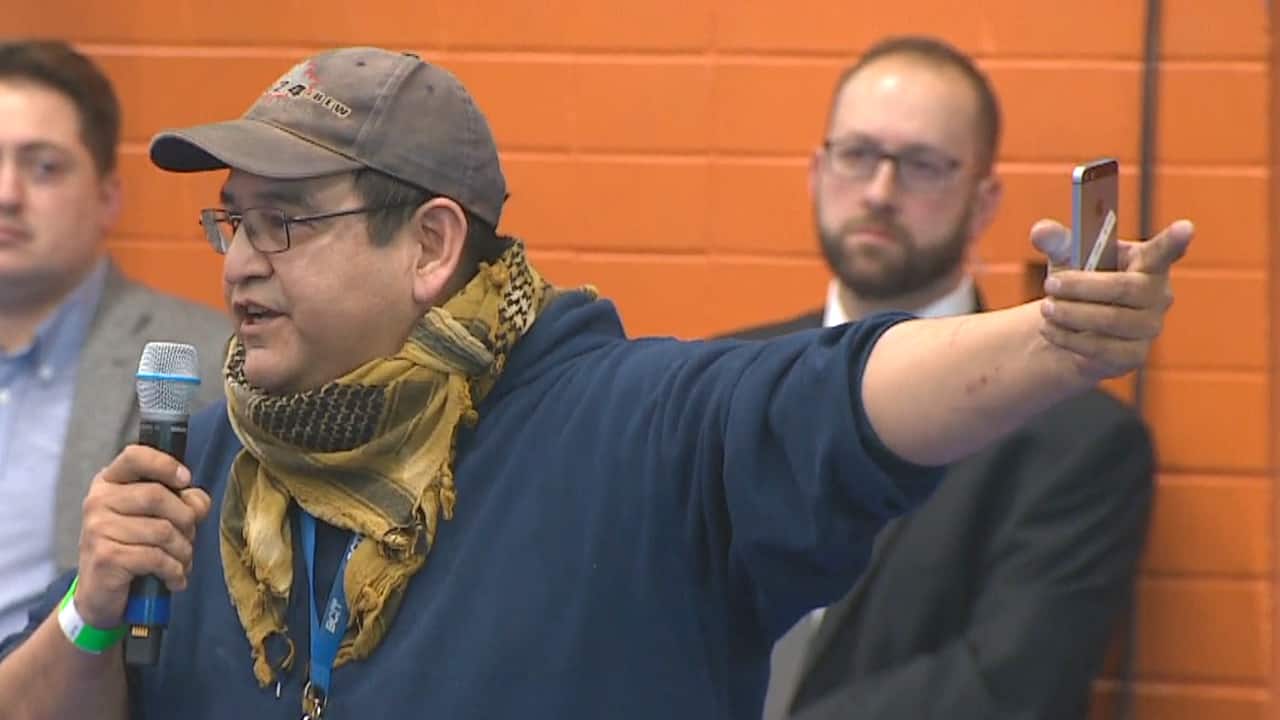 Man calls for ‘RCMP out’ of traditional territory

2 years ago
3:11
Trudeau faced tough questions and comments about Canada's relationship with Indigenous communities in B.C., and the way the proposed pipeline is being handled 3:11

While Trudeau was answering a question on accountability for the oil and gas industry, a man stood up in the crowd and began to yell that the prime minister had lied about wanting reconciliation with First Nations.

"You're getting people arrested," the man said. "You're a liar and a weak leader. What do you tell your children?"

Trudeau returned to the issue more than once, saying at one point that the process should not be rushed.

"We've gone from a place where Indigenous people were not listened to, were not consulted, were not included and we are doing a better job of it."

With files from The Canadian Press and Michelle Ghoussoub