Prime Minister Justin Trudeau faced pointed questions about the Trans Mountain pipeline from First Nation chiefs Tuesday after giving a speech to the Assembly of First Nations in Ottawa.

Prime Minister Justin Trudeau said he didn't expect "unanimity" from First Nations on the Trans Mountain pipeline project but apologized for his government's failure on consultation after a speech to the Assembly of First Nations on Tuesday.

Trudeau took the podium at the annual AFN December meeting in the wake of two recent major announcements by his government on Indigenous issues — child welfare legislation and a reform of the way Ottawa handles historic claims.

In a rare move, Trudeau, who has spoken to the AFN more times than any other prime minister, stayed to take unscripted questions from the floor. 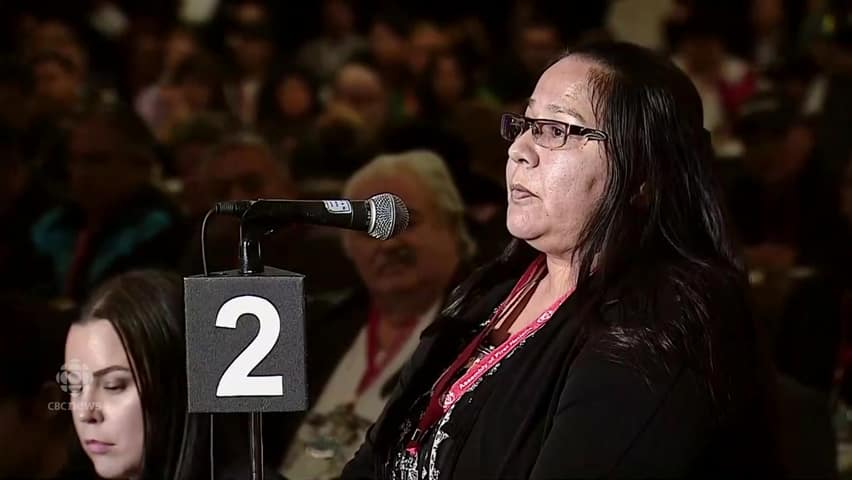 Wilson said mutual benefit agreements signed by some First Nations on the project did not amount to the consent of the people.

"We have to get a proper process of consent, prime minister," said Wilson.

The pipeline crosses about 513 km of the Secwepemc Nation, of which Neskonlith is a member.

Trudeau, who addressed Wilson by her first name, said the British Columbia chief should be "careful" about "minimizing" positions taken by other First Nations that "disagree" with her.

"We put forward a ... renewed process to actually have strong and engaged conversations," said Trudeau.

The prime minister said that his government is respecting the Federal Court of Appeal decision that found Ottawa did not adequately consult with First Nations on the pipeline project.

"We are in the process now of going back and listening even more," said Trudeau. "It is not a process that ever is going to give unanimity. I am prime minister not because 100 per cent of people voted for me, that happens in North Korea."

Coldwater Chief Lee Spahan said his concerns about the pipeline expansion project crossing his community's aquifer has still not been dealt with.

Spahan, whose community is in B.C., invited the prime minister to visit the community and speak with the leadership there.

"The consultation process is flawed," he said. 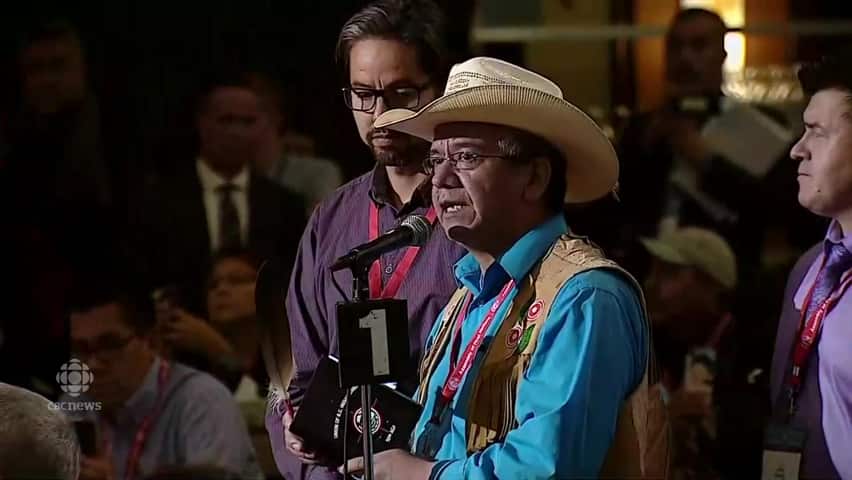 While Trudeau did not respond to the invitation in his answer, he said he was sorry for his government's failure to properly consult on the project.

"I could explain and try to justify it by saying we are starting from a standing start [taking over] from a government that hadn't done any consultations adequately over 10 years," said Trudeau. "But that's not good enough as a reason. I apologize for that. We didn't do a good enough job."

Trudeau said that was why his government appointed former retired Supreme Court justice Frank Iacobucci to lead the new round of consultations to get it right.

During his speech, Trudeau pledged to continue mending Canada's relationship with Indigenous peoples, which had been damaged by actions that began before the birth of the country.

"The legacies of colonialism took more than 400 years to create, so change won't come overnight," said Trudeau. "But with every positive step forward, we advance a little further along the right path. Each step forward, each water advisory lifted, each school built, is a sign that we're on the right track."

Trudeau said his government had already lifted 73 long-term First Nation boil-water advisories and that officials were on track to end them all by 2021.

Trudeau told the chiefs that two anticipated pieces of legislation — Indigenous child welfare and the Indigenous languages act —  would be tabled by January.

However, the prime minister also conceded that his government needed to do more work before being able to table legislation he promised on Feb. 14 to create a framework recognizing Indigenous rights enshrined in Section 35 of the Constitution.

The Trudeau government's move to slow down its push on the recognition of Indigenous rights framework likely averted a looming showdown with First Nations.

A rally of about 100 people against the framework, led by First Nation youth on Parliament Hill earlier in the day, carried echoes of the Idle No More movement that spread across the country between 2012 and 2013.

"How dare you give every generation something to fight against on top of the damage you have already done," said Hanna Sewell, a youth from Batchewana First Nation, reading from a poem she wrote against the framework.

"Let us choose our own fate for once, our generation will not succumb to your attempt at this."

The youth involved in the demonstration then moved down Ottawa's Wellington Street to the Westin Hotel where the AFN was holding its meeting but they were blocked by Ottawa police on a request from hotel management, who said they were concerned about safety and fire code regulations.

After Trudeau spoke, he received a gift of a moose hide vest from the AFN, which was presented by former Akwesasne grand chief Mike Mitchell.

Trudeau then hugged and shook hands with the AFN executive chiefs sitting at the head table.

As Trudeau walked down the riser steps to head out the ballroom's side door, one chief — Rudy Turtle from Grassy Narrows — tried to show him a shirt that read, "PM Trudeau: Will you compensate us for the mercury crisis?"

"I've asked him to visit our community, he hasn't given a favourable response, he's always said 'I'm too busy,'" said Turtle. "We've been polluted for 50 years and it's time he did something."