There's no way around it. For the hundreds of people camping near the Standing Rock Sioux Reservation, opposing the development of the Dakota Access pipeline, winter has arrived in full force.

As temperatures drop in North Dakota, anti-pipeline protesters near Standing Rock are digging in 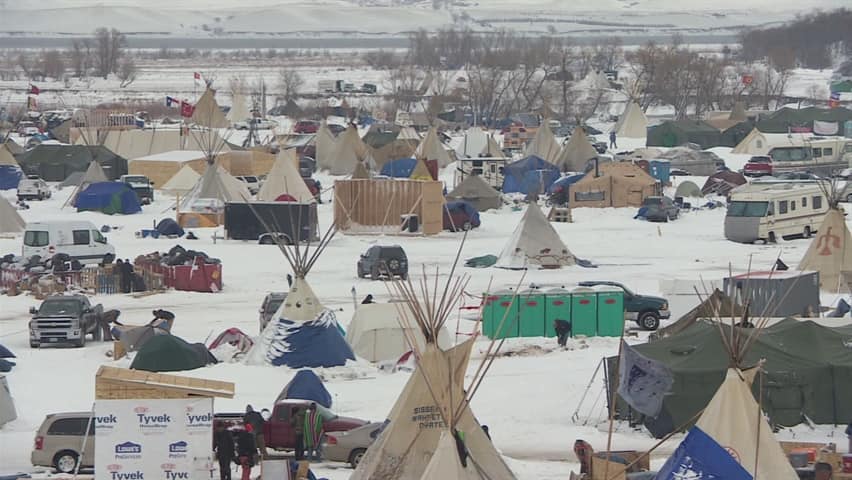 4 years ago
0:32
People camp out near the Standing Rock Sioux Reservation to oppose the Dakota Access pipeline 0:32

There's no way around it. For the hundreds of people camping near the Standing Rock Sioux Reservation in opposition of the Dakota Access pipeline, winter has arrived in full force.

The view from a nearby hill, looking down on the Oceti Sakowin camp in North Dakota, shows a blanket of snow with teepees, tents, RVs and refurbished buses peeking out.

"Can I cuss on TV?" laughs Diana Barker when asked about sleeping at the camp. "It's cold as cold."

The 53-year-old's current home is a makeshift combination of tents, blankets and tarps completely covered in snow.

"Honestly, last night I was scared," she said. "The wind was beating against ... tarps, poles [were] snapping from the tents around me."

It's a far cry from Barker's native California. But she has been here for three weeks, helping to provide food, coffee and warm clothes to others staying in the camp.

Scary? Yes. But is she leaving? Not a chance.

"I ain't going nowhere," she said.

'I'm staying here until they stop'

It's a sentiment shared by many here, digging in for a frigid winter despite a number of evacuation orders from officials over the past week.

Theresa Burns, originally from Pine Ridge, S.D., has been here off and on since September. "This place has a way of drawing you back," she said.

In particular, she returned wanting to "do some good" following the election of Donald Trump. She has an RV that she is planning to insulate with bales of straw and isn't planning on leaving any time soon.

"I'm staying here until they stop," she said of the pipeline development plans. "So, I'm here until maybe March."

Texas-based Energy Transfer Partners is behind the 1,885-kilometre Dakota Access pipeline, which, if completed, will cross four American states, carrying Bakken oil from North Dakota to Illinois. The $3.8-billion US pipeline is almost finished, save for a section that would tunnel under a reservoir of the Missouri River.

Pipeline opponents, who call themselves "water protectors," see the project as a grave threat to the region's drinking water and sacred sites. Others say the pipeline is safer than moving oil by other modes of transportation, such as rail.

For months, thousands of people have descended upon a handful of camps in the area to voice opposition to the pipeline. The largest is the Oceti Sakowin Camp, north of the Cannonball River.

But as weather conditions change, authorities are ramping up the pressure, saying it's time for people to leave the area — and soon.

In the past week, the U.S. Army Corps of Engineers, which manages the federal land on which the Oceti Sakowin Camp sits, and North Dakota Gov. Jack Dalrymple have both issued evacuation orders.

They point to the onslaught of a harsh winter, the need to protect the public from violent confrontations between law enforcement and protesters, and a lack of ability to effectively provide proper emergency services in the area.

"We want the entire public to know that this is not a safe place," Dalrymple told reporters Thursday. "[It] creates the potential of people being literally buried with snow in that area. And it becomes truly dangerous."

"How about you plow the roads?" asked Barker, questioning the public safety rationale. "How about you send somebody, like, 'Hey, are you OK?' And I'm not talking water hoses, because we've had that, and it's not working for us."

She is referring to a recent confrontation where protesters were hosed down with water in freezing temperatures by law enforcement. Protesters say they've also been hit with rubber bullets and tear gas.

"We are only reacting to what protest agitators are doing and forcing law enforcement to do. There's people that want to get arrested and want to — for whatever the reason is — prove their point," he said.

There have been 563 arrests since Aug. 10, Kirchmeier said, mostly of people from outside North Dakota, including some Canadians. "I think the whole agenda has been hijacked by out-of-state, left-wing activists that are here, which isn't the agenda of the Standing Rock people."

How the evacuation orders will be enforced — including one issued for Dec. 5 — is unclear. Authorities say they won't be stopping vehicles heading to the prohibited camps, nor will they block supplies of food, water and clothing.

The U.S. Army Corps of Engineers has publicly stated it will not forcibly remove people from the area. Neither will Morton County police.

Kirchmeier says it is up to the U.S. Army Corps of Engineers to figure out how to remove people from the area.

Still, some say they are staying until the end.

"My being here is one more person," said Barker. "I'm here to stay."

Angela Johnston is a network producer with CBC News based in Winnipeg. Email: angela.johnston@cbc.ca