RCMP say they've concluded "major enforcement operations" of a court order in the traditional territory of a northern B.C. First Nation on Monday, after arresting another seven people who were blocking a service road needed for construction of a natural gas pipeline.

RCMP say they've concluded "major enforcement operations" of a court order in the traditional territory of a northern B.C. First Nation on Monday, after arresting another seven people who were blocking a service road needed for construction of a natural gas pipeline.

Mounties arrested seven people for breach of the injunction and on Monday evening said — once Coastal GasLink confirms that it can access the Morice West Forest Service Road and its infrastructure — they plan to lift a exclusion zone along the logging road.

"I am very satisfied that this operation was conducted safely and there were no injuries sustained by anyone," Chief RCMP Supt. David Attfield said in a news release.

"This was a very challenging situation, and I am proud of the professionalism displayed by our members."

Earlier in the day, police moved into Unist'ot'en, where the Wet'suwet'en have, for more than a decade, been re-establishing a presence in what began as an effort to block proposed energy projects through the area.

People at the site, including journalists, provided updates on Twitter and Facebook on Monday, reporting that RCMP arrived with dogs, tactical members of the force and that some police had been dropped on the backside of the checkpoint via helicopter.

In one of the livestreams posted by the Unist'ot'en, police were heard reading the injunction to a group of women standing in the road — but the women didn't acknowledge the RCMP presence and instead continued drumming and singing in a circle.

Among those arrested Monday were Karla Tait, the director of clinical programming for the Unist'ot'en Healing Centre, and Freda Huson, longtime spokesperson for Unist'ot'en and one of the named defendants in the injunction brought forward by Coastal GasLink. 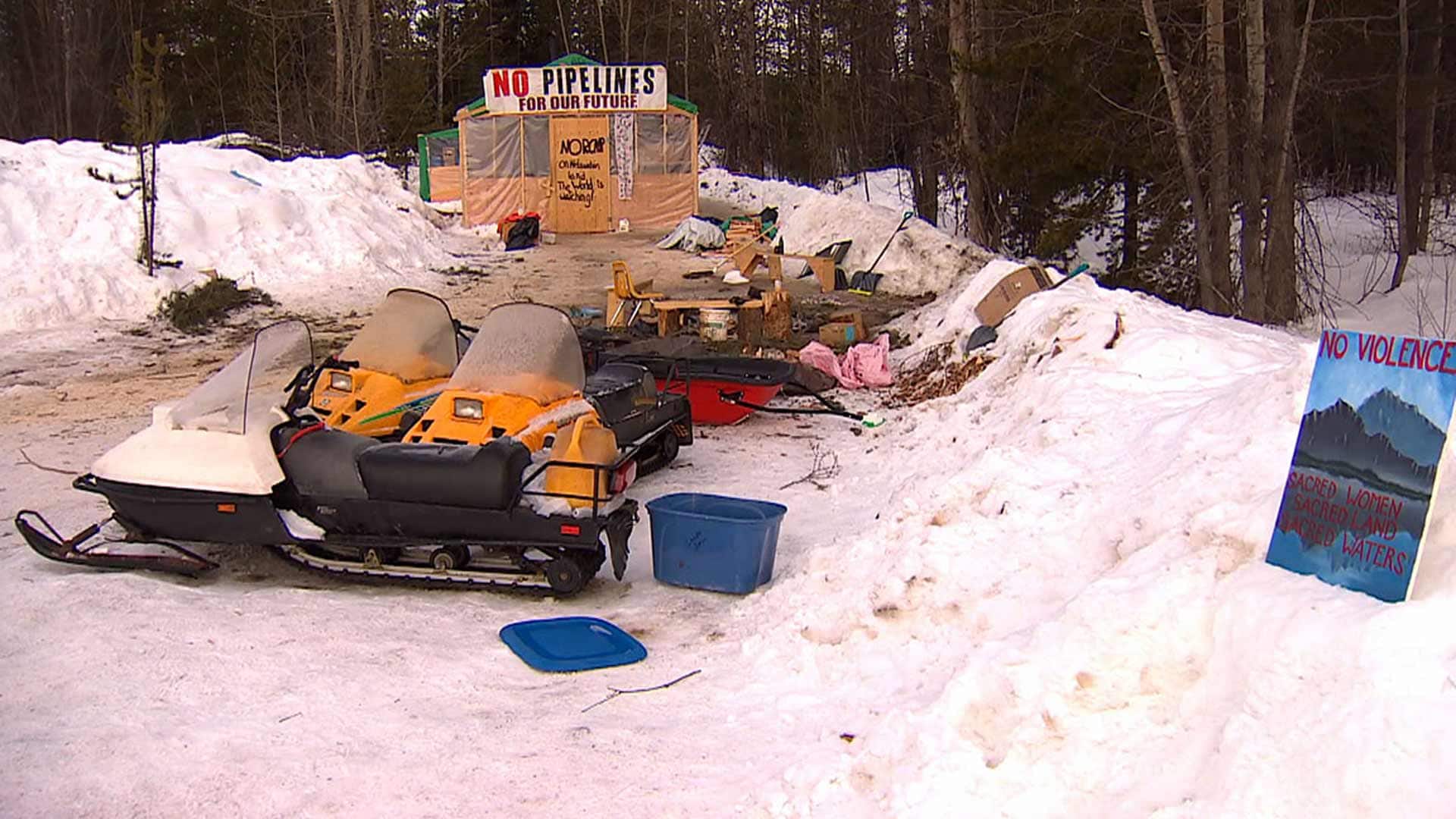 12 months agoVideo
2:22
Tensions are rising in Wet'suwet'en territory where the RCMP are following through on an injunction and blocking access to an area where supporters of the hereditary chiefs are trying to prevent the construction of a major natural gas pipeline. 2:22

The Wet'suwet'en set up an access checkpoint at Unist'ot'en in 2009, controlling who could come into the area. But that checkpoint has since grown, and the area has morphed into a permanent settlement that includes a healing centre.

It's unclear how many people are currently staying in Unist'ot'en. The RCMP said in an email to CBC News on Sunday it would be taking action there on Monday as part of the injunction enforcement.

Acts of civil disobedience and solidarity gatherings have been taking place across the country to show support for the Wet'suwet'en hereditary chiefs, who maintain no pipelines can be built through their territory without their consent.

The chiefs and their supporters have defied the injunction, asserting Wet'suwet'en law instead and demanding that the province and federal government come to the table to sort out their rights and title to the territory.

In recent days, their access to that territory has been shrinking.

The hereditary chiefs and their supporters have been slowly pushed farther out of the area as police move, camp by camp, down the Morice West Forest Service Road.

As of Sunday, police were not allowing people past the four-kilometre mark on the road, saying that would be the boundary of an expanded exclusion zone that had previously been applied at the 27-kilometre mark.

"You know, I never ever thought that we as We'tsuwet'en people would ever be faced with such a crisis as we're facing today," hereditary chief Kaliset told CBC News on Sunday while being kept out of the territory at the police roadblock.

"Us elders, we've sat back and we've watched — we support our young people with the work that they're doing. Today we're speaking out."

On Monday morning, hereditary chief Smogelgem said police had once again shifted their checkpoint to the 27-kilometre mark.

The $6-billion, 670-kilometre Coastal GasLink pipeline has received approval from the province, and 20 First Nations band councils have signed agreements in support of the project, including five of the six band councils in the Wet'suwet'en Nation.

First Nations that signed agreements with the company stand to benefit through a number of avenues — with direct cash payments at different stages of the project's lifespan, contracting and employment opportunities, and other agreed upon conditions.

However, the Wet'suwet'en hereditary chiefs say those band councils are only responsible for the territory within their individual reserves because their authority comes only from the Indian Act. The hereditary chiefs — leaders in place before the Indian Act — assert authority over 22,000 square kilometres of the nation's traditional territory, an area recognized as unceded by the Supreme Court of Canada in a 1997 decision.

Not everyone within the Wet'suwet'en nation is standing behind the chiefs, however.

Bonnie George is a Wet'suwet'en woman who previously worked with Coastal GasLink. She told CBC News she believes the conflict has become "blown way out of proportion."

She stressed there are Wet'suwet'en people who want the project to go ahead and have taken jobs with the project. She also said that the nation is "hurting terribly" through this conflict and welcomed those who are taking action in solidarity with the hereditary chiefs "to refocus that energy on helping us try to live in harmony."

Construction continues along the length of the project at other sections, but Coastal GasLink says it can only put off getting back into the area subject to the injunction for so long before construction timelines are disrupted.

For weeks the company has not been able to move freely along the forest service road at the geographic centre of this conflict.

The Morice West Forest Service Road leads into the heart of Wet'suwet'en territory, about 300 kilometres west of Prince George. It is also the only access road for workers to build the Coastal GasLink pipeline through the area.

Weeks after the injunction decision came out on Dec. 31 it became increasingly clear that those involved in the dispute were at an impasse.

Early Thursday morning, police began the first wave of arrests on the road, at a camp set-up at the 39-kilometre mark.

After that, enforcement took place at the 44-kilometre Gidimt'en checkpoint.

The next day, people were cleared from an area established as a warming centre and gathering space at the 27-kilometre mark.

Between Thursday and Monday, police arrested a total of 28 people as they worked to gain control over the area to ensure Coastal GasLink contractors could clear the road of obstructions from Houston past Unist'ot'en.

Several of those arrested were scheduled to make court appearances on Monday.

Police continue to investigate alleged criminal acts on the territory, including mischief and setting traps likely to cause bodily harm.