Plains Sign Language is a historical means of communicating between Indigenous groups if they did not speak the same oral language. It was the focus of a multi-day language camp at Poundmaker Cree Nation this past summer.

At the Poundmaker Veteran's Hall, a diverse group of people sit in a semi-circle, smiling and joking with each other. Children run in between the chairs and hang off their parents.

Then Lanny Real Bird stands at the front of the group and everyone gets focused again.

Real Bird is from the Crow Nation in Montana and he was teaching Plains Sign Language this past summer at a multi-day language camp at Poundmaker Cree Nation.

Plains Sign Language is a historical means of communicating between Indigenous groups if they did not speak the same oral language. It's also used today, said Real Bird.

"Sometimes in a ceremony or at a powwow, it's handy," he said.

Language camp organizer Floyd Favel said people would speak and use signs at the same time.

"They would talk their language... but they would also use signs. This sign language was good from Saskatchewan all the way down to Texas and you could communicate with all tribes utilizing this." 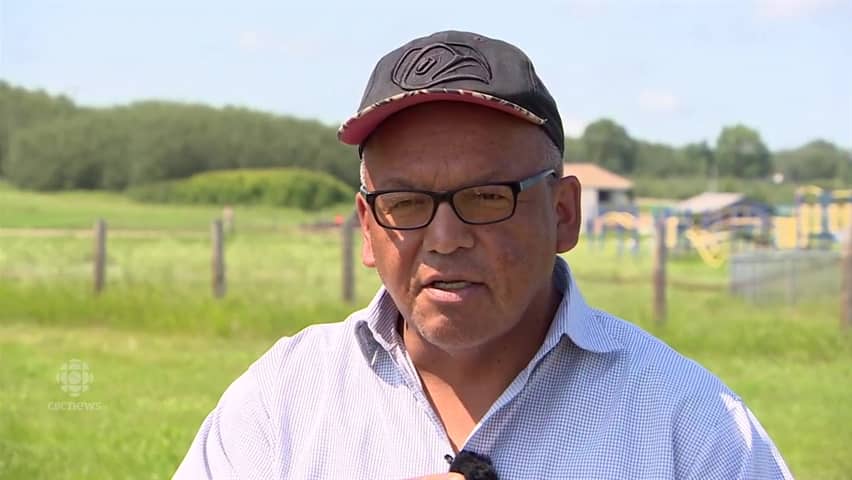 Favel said that the goal of the gathering was to get people interested in preserving Plains Sign Language and "and to see its value as a learning tool, as a method that is different from conventional methods now being taught in universities and in schools. Because I don't think we can really apply English language rules to our Indigenous languages, so our Indigenous languages need to be taught in its own way."

"The Plains Indian Sign language is fun to learn. It's interactive, it's based on direct communication with people. It's not based on learning numbers, or colours, or names of animals. It's used for direct communication and you can use it right away. So I thought, this is an excellent way to teach our people."

The class of about 30 students said the words in Cree that were spelled on a big piece of paper at the front of the class while making the Plains Sign Language gesture for the word. There were Indigenous and non-Indigenous students, with some coming from Alberta, Nova Scotia, New Zealand, and Poland.

Mylan Tootoosis, one of the participants in Plains Sign Language camp, said the course was inclusive and that that was evident in the different people wanting to learn this historical means of communication.

He said he was learning how nuanced sign language can be.

"When you're doing some signs, you could do it in a very mild manner, or you could be a bit more forceful, so there are degrees of how strong you want to say something."

During class Tootoosis sat next to his partner as she breastfed their newborn daughter. After, he swaddled his baby girl and spoke Cree words alongside the rest of the language learners.

"It really ties you back into that landscape and that paradigm — that way of thinking that was practised by our ancestors and our people," he said.

At the end of the gathering, cultural director Kevin Daniels said the language camp was meant to help preserve this way of communication.

"I'm looking into the future," he said.

Ntawnis Piapot is Nehiyaw Iskwew from Piapot Cree Nation. She has a journalism degree from the University of Regina, and is a graduate from the INCA Media and Intercultural Leadership Program from the First Nations University. Ntawnis has been a reporter for CBC Saskatchewan, APTN National News, CTV Regina, VICE News, J-Source and Eagle Feather News. Email: ntawnis.piapot@cbc.ca