Behind the statistics: The story of 2 Indigenous children on the brink of becoming court wards

Provincial child welfare authorities in Ottawa filed an application in court this month seeking to place two Indigenous children under permanent state care with the aim of adopting them out.

It's a move, that if successful, would add to what has been described as a "humanitarian crisis" by Indigenous Services Minister Jane Philpott.

Philpott is holding an emergency meeting with provincial and territorial ministers in Ottawa on Thursday and Friday in hopes of finding a way to stop the critical overrepresentation of Indigenous children in child welfare systems across the country.

Ontario's Minister of Children and Youth Services Michael Coteau and Manitoba's Minister of Families Scott Fielding, co-chairs of a premiers' working group on child welfare, released a statement saying they hoped the emergency meeting would address "underlying root causes" of the crisis like "poverty, intergenerational trauma and access to housing."

Those three issues played into this story.

CBC News is prevented by law from identifying the children and their parents.

The father's mother attended a residential school on Vancouver Island where she was sexually abused. He was born with Fetal Alcohol Syndrome and raised by his grandparents. His father, who died of AIDS in 2003, was absent as a result of prolonged stints in incarceration.

The children's father said he spent most of his teenage years as a ward of the court, bouncing between foster homes and juvenile detention centres and dealing with hard drug addiction.

The mother of the children, who is Inuk, declined an interview.

Kids' future in hands of judge

The kids' future now rests largely in the hands of a judge who will rule on an application from the Children's Aid Society of Ottawa next month to make them permanent wards of the court with the aim of adopting them out.

Four months ago the children were in the care of the father's cousin Marisa Sutherland and her husband Christopher Justa.

The father's band on his mother's side, the Mowachaht/Muchalaht First Nation on Vancouver Island, signed off on the arrangement. Sutherland and Justa, who have two children of their own, moved from a three-bedroom apartment into a rental house to accommodate the children and bought a van.

Then it all came crashing down after police showed up at their door five days before Christmas, one of them with a battering ram. The agency seized the children without informing the Mowachaht/Muchalaht First Nation.

The First Nation was only informed of the seizure, by fax, on Jan. 17. 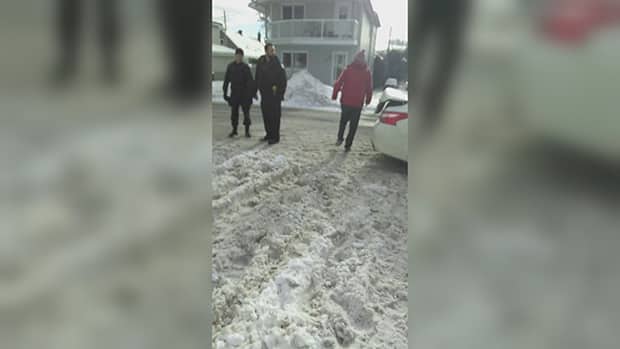 3 years agoVideo
0:23
Video was provided by the family. CBC News is prevented by law from identifying the children and their parents. 0:23

A review of the case raises questions around the agency's efforts in involving the father's two home First Nations in finding alternatives to adoption.

The father's other home community, the Ahousaht First Nation on Vancouver Island, is now preparing to intervene and possibly bring the infants to British Columbia.

Ramona Mark, a family support worker with Ahousaht, said the Ottawa agency never contacted the First Nation. She said the responsibility is on the agency to track down community connections. The First Nation only became involved last week after the father reached out.

"This is moving into an adoption and it is really mind-boggling how we got there," said Mark.

"Here in our home we work really hard to keep our kids in the community."

Cindy Perron, spokesperson for the Children's Aid Society of Ottawa, said kinship placements are regulated by Ontario's Ministry of Children and Family Services with oversight provided by the local agency and the First Nation connected to the child. Perron said the agency is required to apply for court wardship if a child is in care for 12 consecutive months —which includes the initial stages of a customary care agreement.

"We believe that Indigenous people are best served within their identified community. Our experience is that many families do not provide information about their band or community of origin in the initial stages of our relationship," said Perron.

"Throughout our involvement with a family, we make continuous efforts to help connect or reconnect family members with the appropriate Indigenous community agencies ... to ensure the family is well supported."

At 4 a.m. on Feb. 17, 2017, the father, the primary caregiver, said he was cooking eggs and bacon while sterilizing baby bottles in the kitchen on his floor at the Ottawa YMCA shelter where he was living with his two infants in a small room.

His son was barely three months old at the time, his daughter, one year. The father was preparing for another day of snow shoveling, which begins early, and he planned to drop the children off with his cousin. Then, as he walked out of the kitchen carrying the food, he said he saw a police officer and a woman with the children in her arms.

"That is when I freaked out," he said.

"They wanted me to show no emotion and just watch somebody take my children."

Child care workers had previously visited the father when he lived at two other locations following the birth of his son. Each time they determined the children were safe with him, according to the court file which also noted his past issues with alcohol and marijuana use.

The agency said in court records it received a call from the YMCA alleging the father was drunk at 2 a.m. The father denies this and said he walked home after sharing a few after-work beers with Justa and arrived at 11 p.m. He said he had left the infants in the care of a shelter neighbour.

The court file revealed that the agency only notified the Mowachaht/Muchalaht First Nation of the apprehension on June 20, 2017, in a fax that included documents from the previous February.

Shortly after the apprehension, Sutherland and Justa said they expressed an interest in caring for the children. They are upset with the agency's decision to apprehend the children without first giving them an opportunity to intervene.

"I wouldn't have cared what time they called," said Sutherland.

"They should be with me right now."

In September, the couple and the agency began the process to finalize a customary care agreement. By Nov. 2 they had passed the initial Ministry of Youth and Children screening and the children were placed in their care on Nov. 7 for an extended visit in preparation for a final court approved sign-off on Dec. 18 and a closing of the file. The First Nation and the Ottawa agency were to supervise the extended visit, according to the court file.

Tensions began to build between the child welfare workers on the file and Justa over the infants' mothers' access and the slow pace of finalizing the process. Justa said workers visited the home about 20 times during that period. The family moved into a rented home in Gatineau, Que., to accommodate the infants and bought a van.

The agency determined that the anger they perceived as being directed at their workers put the infants at risk. The agency then directed Gatineau police to seize the children on Dec. 20, 2017.

Police arrived with a battering ram and pressed a Taser against Justa's chest.

"They physically took the baby out of my arms," said Sutherland.

"They left me feeling helpless. I don't know what to do. I just feel lost. I can't believe that this is really happening."

Now bananas and hummus make her cry. The "babies" loved those foods, she said.

"It's almost like my worst nightmare coming true," said Sutherland.

The two-day emergency meeting on Indigenous children in the child welfare system begins Thursday in Ottawa.