The Ontario government is facing accusations it's playing favourites with First Nations near the mineral rich zone dubbed the Ring of Fire, dealing only with those willing to push on with road developments while ignoring those that want deeper and broader consultation.

Shortly before the 2018 Ontario election, Bob Rae sent a memo warning the nine Matawa First Nations chiefs to resolve internal differences or face the collapse of collective negotiations to develop the mineral rich zone in the James Bay lowlands known as the Ring of Fire.

"[Ford] has not said anything positive about engaging First Nations in any processes only that he would 'drive the bulldozer himself' to get road construction started," wrote Rae in the memo.

Rae said in the memo the new government would likely favour striking deals with individual member First Nations to get a road built into the chromite, gold and vanadium-rich region which has an estimated value of about $60 billion.

Rae turned down a request for comment from CBC News.

Rae's words to the Matawa First Nations — whose territories are closest to the Ring of Fire — proved prescient.

The future of the framework agreement, signed with much fanfare in 2014 by former premier Kathleen Wynne and the Matawa First Nations, now lies in question after the Ford government chose not to renew its funding.

And the first phase of a road that could eventually reach the the Ring of Fire is about to enter an environmental assessment.

'We have to create hope'

One of Matawa's members, Marten Falls First Nation, is moving ahead with a 138 to 231 km gravel road project that will connect it to the province's highway network at Nakina, Ont. It has selected an engineering firm to lead the environmental assessment which could take two years to complete.

The remote community about 430 km north of Thunder Bay currently relies on air and winter road connections to the rest of the province.

The second phase of the road project would then run about 160 km from the First Nation into the Ring of Fire.

"The community wants road access to the highway,' said Marten Falls Chief Bruce Achneepineskum. "We are asserting our jurisdiction by looking after the interests within our territory."

Achneepineskum said the framework agreement "failed" because the Matawa First Nations could not agree on a negotiating protocol.

Achneepineskum said the road would bring desperately needed jobs closer to reality in his community.

"How can we stop young people's ambitions ... for a better life if we don't start taking steps to making the economic opportunities that lie there at the Ring of Fire?" said Achneepineskum.

"We have to create hope."

Marten Falls has an exploration agreement with Noront Resources that includes about 300,000 common shares in the firm. Noront is the main player in the Ring of Fire and has one project, called Eagles Nest, in the environmental assessment system.

A second fly-in Matawa community, Webequie First Nation, about 450 km north of Sioux Lookout, is also exploring constructing a supply road from the community into the Ring of Fire area.

Webequie is also in talks with Noront, according to one of several memos sent by Rae and obtained by CBC News.

The Ontario government is facing accusations it's playing favourites, dealing only with those willing to push on with road developments while ignoring those that want deeper and broader consultation.

On Wednesday, Ontario's minister of Energy, Northern Development and Mines and Indigenous Affairs Greg Rickford said the Ford government would rather focus on specific projects, like roads, instead of deals covering "massive development" like the Ring of Fire.

Rickford said First Nations could then move on to working with resource firms on deals to get projects started.

"We think there are important principles in [the framework] that have been gained, but they haven't served every community," said Rickford during a question and answer session at a Chiefs of Ontario meeting in Barrie.

Two other Matawa First Nations — ​Eabametoong and Neskantaga —  say the piecemeal approach is being used to divide them and avoid broader consultation and jurisdictional questions.

"I can't get a meeting with you, I've requested meetings, I've heard zilch from you," said Eabametoong First Nation Chief Elizabeth Atlookan to Rickford during the heated session. 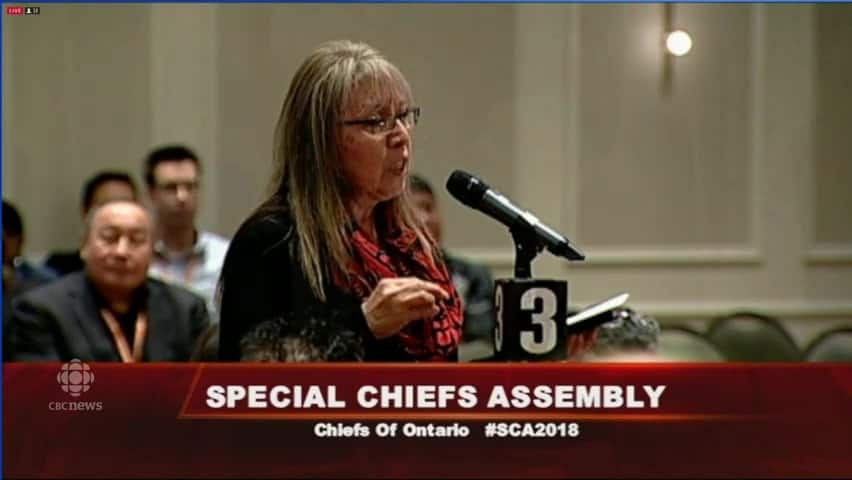 2 years agoVideo
5:43
The Chief of Eabametoong First Nation addresses the Ontario Minister of Indigenous Affairs at a meeting of the Chiefs of Ontario. 5:43

"Is it because two nations have decided to build roads that you leave us out of the equation?"

"Do you respect the rights of our people, the ties, the positions we have towards our lands, the way decisions have to be made?" said Moonias. 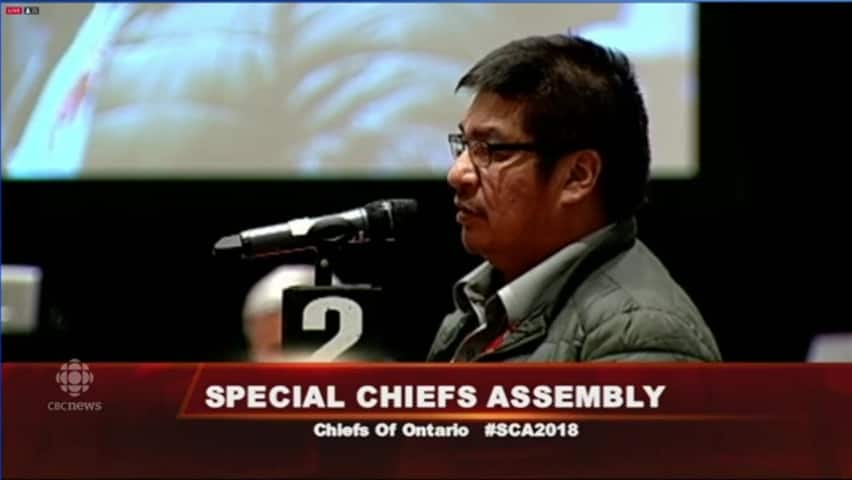 Atlookan said in a recent interview with CBC News that the Matawa communities had been fractured by the Ontario government's "divide and conquer" tactics that began with the previous Liberal administration.

"We went in as a team of nine ... The government was able to fracture and possibly get the road at the least cost," said Atlookan. "It caused a rift among the nations."

"We did not know they were doing that," she said.

Two months before the announcement, in June 2017, Rae sent a memo to the chiefs after attending a University of Toronto convocation where he ended up sitting next to Ontario's lead negotiator on the file, Frank Iacobucci, a former Supreme Court justice.

"Frank said to me that the government really does want to move forward and is ready to make some significant investments," wrote Rae, in the memo. "He said that willingness hasn't changed."

In one of his last post-provincial election memos, Rae suggested the Matawa chiefs sort out their differences with the help of corporate consulting firm Watershed Partners, which has offices in Victoria, Toronto and New York.

The Matawa chiefs, with the exception of Achneepineskum who sent a proxy, met this month with Watershed, which received $400,000 from Ottawa to do the work.