A handful of Six Nations community members watched as the facade of the Mohawk Institute — Canada's oldest continuously operated residential school — was covered by fire.

The fire was part of a drive-in theatre style image projected onto the wall of the former residential school in Brantford, Ont., about 100 kilometres southwest of Toronto, for the National Arts Centre's Grand Acts of Theatre series.

Continuance: Yonkwa'nikonhrakontáhkwen — Our Consciousness Continues Unchanged was one of 12 large scale outdoor live performance works commissioned in an effort to bring audiences and artists together in a time when COVID-19 makes that a challenge.

Mohawk director, producer, and performer Santee Smith's company Kaha:wi Dance Theatre and the Woodland Cultural Centre partnered to produce the performance. The production was put together almost completely by Indigenous or people of colour, according to Smith.

"We had intergenerational survivors in the audience and we had some amazing responses, who not in their wildest imagination would they have thought they would see something like that on the school, as we reclaimed it with our imagery." 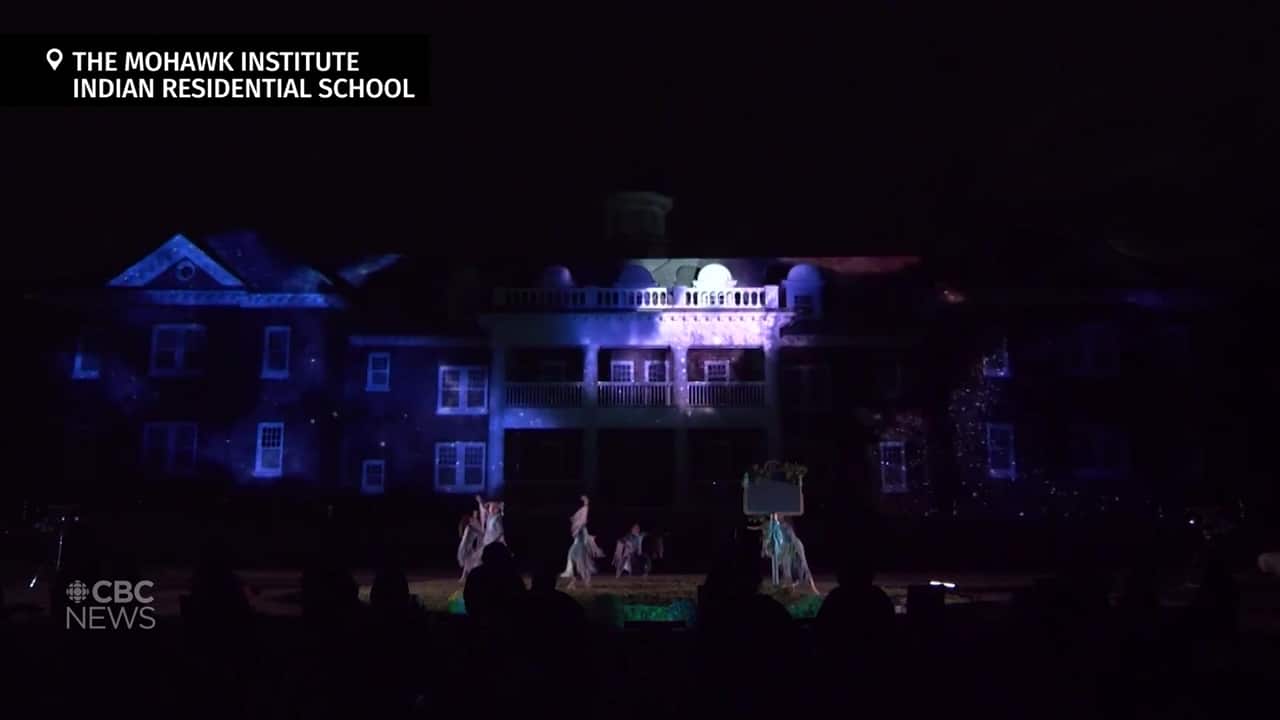 Transforming a residential school through dance and imagery

After the projection of fire, the performers rose from the ground and blended their dance movements with the telling of the Haudenosaunee thanksgiving address through choreography and original music.

"If we lived by our traditional teachings, if we embodied and understood and placed ourself in context to the natural world, we would be in a better place," Smith said.

"The whole world would be in a better place, we would be more environmentally conscious, we would have more empathy."

At the performance were sisters Dawn and Roberta Hill who attended the Mohawk Institute — colloquially known as the 'Mush Hole' — when they were children. At one point an archival image of children who attended the school was projected onto the facade.

"[The images] actually brought me forward in many, many ways," said Roberta Hill, who also served as an advisor on the project.

"It's hurtful to know that my friends were hurt, you know, and I didn't realize that. I didn't realize that I wasn't the only one. When you think of 'continuance,' we're talking about life cycles, that life doesn't end just because of the trauma and all the rest of the stuff that went on at these schools. It has to go on...we have to survive, and I think this performance showed you that history."

Dawn Hill said she thinks this work, and the story of the Mohawk Institute, is important and needs to be heard more widely.

"I really think students need to hear the stories," she said.

"They need to hear firsthand, they need to hear real people talking and especially from their own communities, because we're talking about the Mush Hole here, but across Canada, somebody needs to be recording those stories and presenting them."

"Her name was Mabel Smith, and I know nothing of her history," Smith said.

"She was orphaned and she entered the school when she was two years old. She spent all of her youth at the Mohawk Institute."

Reclaiming the Mohawk Institute with Haudenosaunee art has been a community-driven initiative. The school stopped operating as a residential school in 1970 and two years later opened as the Woodland Cultural Centre, collecting artifacts and research.

Smith said that when the roof of the school started to leak in 2013, millions of dollars of repairs were needed and a community referendum resulted in overwhelming support to repair the school, launching the Save the Evidence Campaign.

"I think Santee has really shown that history will move on no matter who you are; we are strong and our lives continue," said Roberta Hill.