Jigging trio carries on their family name and Métis traditions

The Ivan Flett Memorial Dancers are carrying on the name and memory of their grandpa, who passed on to them his love of jigging.

These three siblings are adding a new flavour to the old tradition of jigging by mixing it up with other musical genres.

In a recent video, the Ivan Flett Memorial Dancers can be seen in Métis dancing regalia, jigging away to the '90s dance classic Gonna Make You Sweat (Everybody Dance Now) by C+C Music Factory. 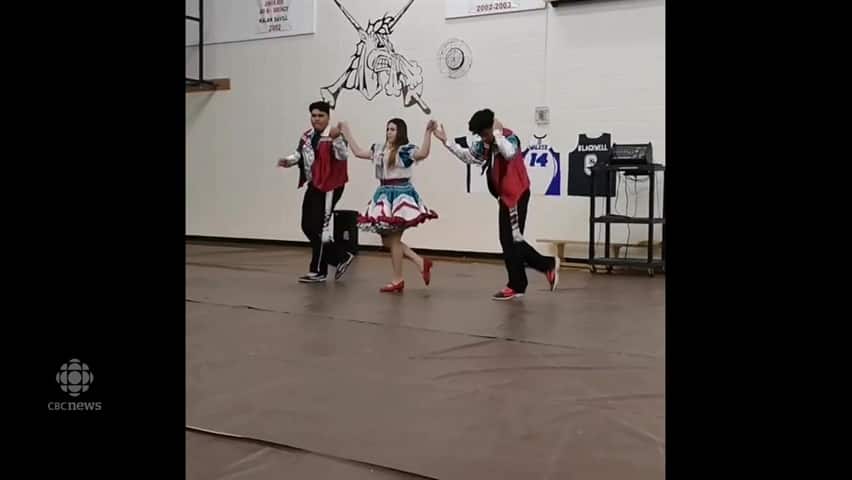 Three Harris siblings, Michael (19), Jacob (16), and Cienna (15), have been jigging ever since they can remember, being shown the ropes by their grandparents.

The eldest of the three was four when he started jigging.

His grandparents, Dawn Harris-Flett and Ivan Flett, would take him to the Métis Club in Winnipeg's North End every Friday evening to watch people like Ryan Richard and the Asham Stompers jig.

"I used to count down the days to Friday," said Michael.

It was at that small club where he fell in love with the dance.

"After my dad passed away, they lost interest in dancing, they were sad," said Shelly Harris, the mother of the dancers.

"They didn't want to continue on. But we told them that they shouldn't give up because my dad was the one who took them around. He took them to all of their dance shows, he practised with them."

The Harris siblings decided to call their group the Ivan Flett Memorial Dancers.

Taking the show on the road

These days, the Ivan Flett Memorial Dancers travel across the country doing workshops and showcasing old-style classics like the Red River Jig, the Orange Blossom Special and square dancing.

They have travelled from Vancouver to Nova Scotia, often performing for young students.

"When I go up north, you should see the kids' faces. It's crazy," said Harris.

Their choreography is a product of the whole family sitting inside the house, brainstorming together. Their outfits are handcrafted by their grandma Dawn.

In 2017, the family packed up their vehicle and drovet to Memphis, Tenn., to audition for the reality show America's Got Talent. They didn't end up being selected, but it was still one of the most memorable dancing moments of Michael's life.

His goal is to take jigging into the same category as other dance styles..

"I'd love to one day open my own dance studio. I'd love to teaching dancing."

In the future, the trio hopes to be joined by their five-year-old sister Savannah, and six-year-old brother Liam, who are learning the family's tradition.