Inmates from a nearby correctional facility will harvest more than 4,500 kg of vegetables for a Maskwacis, Alta., food bank this year.

Inmates from a nearby correctional facility will harvest more than 4,500 kg of vegetables for a Maskwacis, Alta., food bank this year.

The partnership between the food bank at Samson Cree First Nation and the Pê Sâ​kâ​stêw Healing Lodge, a minimum-security federal prison located on the reserve, started three years ago.

Peyasu Wuttunee, acting executive director of the healing lodge, said the garden began as a way to use some of the centre's extra land. Staff bought seeds through donations, with the intention of donating the resulting produce to the food bank.

"We have Indigenous people over-represented in the correctional system and our opportunity is to break that cycle of poverty, which is a part of their social history that brings them into custody," Wuttunee said.

"It's helping to break that cycle and it's given these men an opportunity to give back through community service." 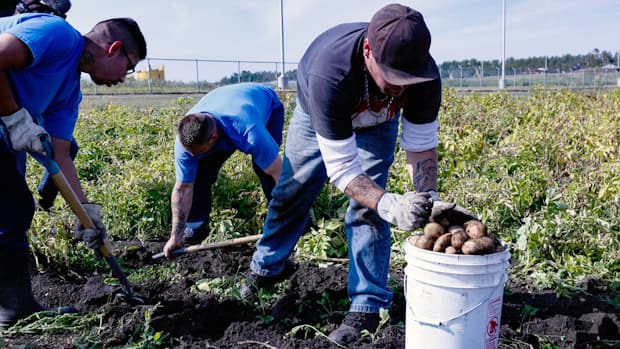 2 years agoVideo
3:06
Inmates at Pê Sâkâstêw Healing Lodge are harvesting vegetables for a local food bank to give back to the community. 3:06

This year, Wuttunee said the garden will produce an estimated 4,500 to 5,000 kg of vegetables such as potatoes, carrots and turnips.

Inmates do the daily fieldwork on a volunteer basis. Dale Swampy said he hadn't farmed before coming to the Pê Sâ​kâ​stêw Healing Lodge.

"It's difficult, but it's good. It gives you a form of gratitude," Swampy said.

"Just even this one potato can fill someone's stomach and that's a great thing, knowing that.

"The guys are even learning basic skills like digging potatoes up, growing them, rototilling. They can do that at their homes and teach their kids, their families, how to grow potatoes or even onions, beets, carrots."

Janet Swampy, manager of the Samson Food Bank, said the rate of poverty is high in the community. The food bank gives out 200-700 hampers a month.

She said the food bank tries to alleviate food insecurity "especially with the children and providing them with fresh food on their tables every day."

The vegetables from Pê Sâ​kâ​stêw are distributed to community members through the food bank and to the soup kitchen that serves the community every Wednesday through the winter months.

She said the initiative not only helps the food bank, but helps the inmates who are Samson Cree members feel part of the community by contributing.