During the first stop on Justin Trudeau's three-day town hall tour of Canada, Michelle Paul and Rebecca Moore circled the gym at Sackville High School, waiting for a chance for a one-on-one with the PM.

Paul says she locked eyes with Trudeau during his response to another question and felt "peace" wash over her. 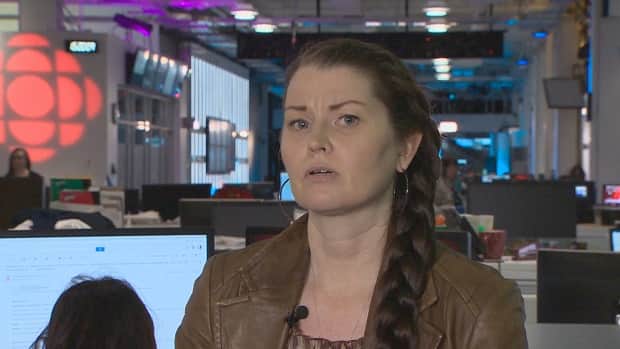 An invitation to Prime Minister Trudeau

3 years ago
0:43
Mi'kmaq Michelle Paul says its time for a nation-to-nation meeting , outside of Canada's relationship with the Assembly of First Nations. 0:43

"I could feel it. It was time for this to happen," said Paul.

"I was empowered by the strength of all my ancestors. I always feel that whenever I'm doing something right."

Trudeau acknowledged the eagle feather Paul was holding and she was given the microphone.

"There's so much to say and I've been sent here as a messenger," Paul began.

Paul said that while she was representing herself, as a rights holder, her invitation was also a message on behalf of "at least one ancestral District Chief," whom she would not name.

There are seven ancestral districts of Mi'kmaq territory, Mi'kma'ki, whose governance system, Paul emphasized to Trudeau, is still intact.

'They do not represent me'

"When you campaigned, you promised a nation-to-nation relationship," she said.

Paul told the prime minister that the ancestral district had "a declaration" to offer him and invited him to meet at Mi'kma'ki's "treaty truck house," a traditional trading post, so it could formally present Canada with the document, which is titled Unity and Partnership.

Paul wouldn't provide details of the declaration's contents, stating it was for "Trudeau's eyes only," but said it didn't ask anything of the government.

"We don't want anything from him," Paul said.

"We're not having our hand out. Matter of fact, we want to help him."

Paul said she believes the nature of Indigenous and non-Indigenous relationships in Canada is primed to change, noting the rate at which Indigenous populations are growing in Canada, and that recent generations of First Nations youth are seeking to learn more about their culture and history.

She said governing bodies should begin reflecting those changes, and she thinks the dissolution of the Assembly of First Nations (AFN) could be a good place to begin.

The hashtag #dissolveAFN is being shared on social media platforms, with much user commentary focused on the assembly's government funding and foundation under the Indian Act.

"One of the things always consistently said is 'we're not the nation,'" said Morley Googoo, AFN Regional Chief for Nova Scotia and Newfoundland.

"We're only an advocacy group. We're a lobby group on behalf of the 635 communities across Canada."

Googoo said the assembly has policies and protocols in place so as not to misrepresent any of the nations. It represents the collective decisions of the Chiefs, Googoo said, and the Chiefs represent their communities.

The nature of many First Nations coming together, Googoo says, is that there are many different ways of making decisions.

"The Mi'kmaq have definite different way of doing business than the Mohawk, and than the Dene," he said, adding that the opportunity is always there for First Nations to have their own conversations with Canada.

"We just open the door, to make sure those opportunities exist," Googoo said.

"The Assembly of First Nations advocates for governments in Canada to respect and implement First Nations rights, title, treaties and jurisdiction."

Michelle Paul said she believed Trudeau's response to the invitation came "from the right place."

"We cannot be the country we like to pretend we are in our smug moments," Trudeau said, prefacing that stronger relationships with "Indigenous people" is something that all Canadians want.

"[You've] highlighted the complexities and challenges ... of defining what is a nation-to-nation relationship," Trudeau said to the two Mi'kmaq.

Trudeau went on to say that decisions on "a way forward" for Indigenous communities "cannot come from Ottawa," and that it will take longer than his "one or two terms" in office to build up nation-to-nation relationships.

Six days later, Paul said the Mi'kmaq haven't received an RSVP from the prime minister, but that she met with Halifax Member of Parliament Andy Fillmore who is requesting a response on their behalf.

Mi'kmaw Rebecca Moore, who took to the microphone after Paul, says her plan was to use rhetoric to make her point.

"If we, the Mi'kmaq Nation, have best advantage in trade then why are we the poorest people in Canada?" Moore asked the prime minister.

Moore is a seventh-generation descendant of Jean-Baptiste Cope, who signed the Treaty of 1752 on behalf of the Mi'kmaq. Moore says she sees her great-grandfather's treaty "disrespected every day," and wanted Trudeau to know she plans on fighting to have it enforced.

"I educated him a little bit."

By not honouring the Peace and Friendship treaties to their full capacity, and impeding Indigenous rights to sell wares and fish for a moderate livelihood, Moore says the Canadian government is breaking international treaty law.

"I plan to hold him accountable for that," she said.

Given the opportunity to meet with Canada at the Mi'kmaq treaty truck house, the way her great-grandfather did in his time, Moore says she'd feel better about Canada's dealings with her nation.

"I was coming at him as a direct descendant, as a treaty beneficiary," Moore said.

"[AFN] is not a nation. People like me are not going to let them get away with it."