For this grandmother and grandson, speaking Ojibway is 'an act of defiance'

When Patricia Ningewance lay quietly sobbing in her dormitory bed at the Shingwauk Indian Residential School in northern Ontario, she never imagined she'd one day willingly return. But now she's back to teach the very language the school tried to steal from her, working alongside her grandson.

Not only that, but she's back to teach the very language the school tried to steal from her, working alongside her grandson, Aandeg Muldrew, to share Ojibway with a new generation of Indigenous youth.

"This is where I formed my dreams. I was away from home, I was very lonely for my family," said Ningewance.

"I can't believe it sometimes. There he is, talking, conversing with someone in the language," said Ningewance, a big smile on her face as she watches her grandson speak with some students. "He doesn't pause, he just talks … brings tears to my eyes sometimes."

Of the more than 70 Indigenous languages spoken in Canada, many are considered critically endangered — a byproduct of the country's history of colonialism and the passage of time.

(Though Ojibway, spoken by more than 28,000 people across the country, is considered healthy.)

Reports from the 2015 Truth and Reconciliation Commission report and the 2007 United Nations Declaration on the Rights of Indigenous Peoples (UNDRIP) both addressed language preservation as key to undoing some of the damage of the past. And earlier this year, the federal government tabled legislation to protect and promote Indigenous languages.

But many groups say that's not enough; they're taking matters into their own hands, trying to save these languages through education. It's part of the reason Ningewance, 68, and Muldrew, 21, are now teaching together.

They spent much of their time outside in an open-air lodge, learning traditional activities, like how to catch, fillet and smoke a fish, to more mainstream ones, like driving a car, grocery shopping and arguing an opinion — all in immersive Ojibway.

"It's very meaningful, very profound to be doing this here," said Ningewance. "Sometimes you can still feel the oppression, but we're learning the languages joyfully."

Algoma University, in Sault Ste. Marie, Ont., is the former site of the Shingwauk Indian Residential School, one of the 130 government-funded, church-run boarding schools for Indigenous children that operated between 1874 and 1996.

As Indigenous children were ripped away from their homes, families and traditions with the goal of assimilation, many students experienced abuse, neglect and the loss of their language and culture.

Ningewance spent two years at a residential school, once at age five and once at 13. Her mother died while she was away the second time.

But Ningewance went on to spend her adult life working to save the Indigenous languages that Canada's residential school system tried to eradicate. Her teaching and translation career is the culmination of decades of personal healing, finding her voice and learning how to share it with others.

Ningewance taught Ojibway language classes in Winnipeg for decades, instructs language teachers during the summer at Lakehead University, and started working at Algoma three years ago.

She's also written a phrase book in Ojibway that has been translated into other languages, including Swampy Cree, Inuktitut and Oji-Cree, and authored titles like Gookom's Language: Learning Ojibwe and Becoming a Successful Ojibwe Eavesdropper. And she did translations of the final reports for the Truth and Reconciliation Commission and the National Inquiry into Missing and Murdered Indigenous Women and Girls.

At Algoma, Ningewance's office is located just meters from where she slept was as a teenager — a place she now prefers to avoid. "I don't like going there … I do a lot of my work at home in my apartment," she said.

'The words would get stuck'

When Ningewance started her own family, she vowed to teach them about their Indigenous culture and traditions. But she said she was unable to teach her son the language — something she still can't entirely explain.

"I believed it was very important to pass the language to him, but it never happened because whenever I would talk to him, it was only reprimands that would come in Ojibway and that gave him a very negative message," she said, a pained look on her face.

"Every time I would try to teach him anything in the language, I could never do it. The words would get stuck. And I was afraid that would happen with my grandson, too."

But as Muldrew was growing up in Winnipeg, he said he felt the need to speak the language of his ancestors.

When he was 10, he went to an immersion camp his grandmother was teaching at Lac Seul First Nation, started sitting in on courses she taught at the University of Manitoba, and then began speaking Ojibway with her outside of class.

"I would go along with her in the car, eating and learning the language," he said.

"It's a way of thought. It changes how you see things. And learning the language really kind of builds community and connection to me that a lot of people have lost.

Now the youngest sessional instructor at the University of Manitoba, teaching introductory Ojibway, Muldrew jumped at the chance to lead an immersion course with his grandmother.

He describes speaking Ojibway on the site of the former residential school as "an act of defiance."

"[It's] trying to overcome … taking back our language," he said.

Beside him, intermediate student Quinn Meawasige, 25, sings and conjugates verbs as he builds a fire for smoking the fish students pulled from French Bay earlier that morning.

For Meawasige, language is about identity and survival.

"It's a grounding of pride, especially at a place like this, a former residential school. It's a place where the language was attempted to be eradicated and now we're actually bringing it back."

Meawasige said he felt both strength and hope when he saw Ningewance and Muldrew teaching together. 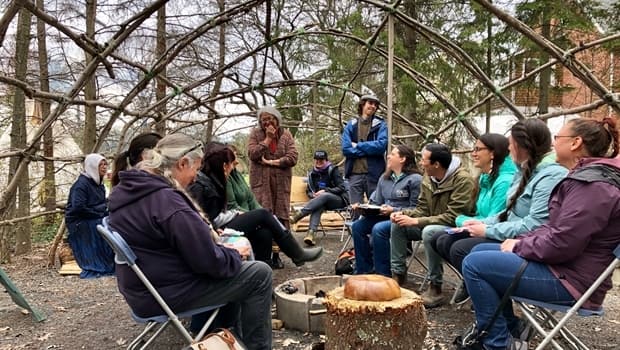 As Meawasige tends to the fire, Ningewance and Muldrew takes some of the other students grocery shopping. The language has to work in the real world, too, they say, not just in formalized settings.

With their Ojibway phrasebooks in hand, they use the excursion to learn new vocabulary. The words for different cuts of meat, for example.

But some things just don't have an Ojibway word.

"Some things, you can create a name for. But a peach, not really. Just peach," Muldrew explained. "Apples, mushrooms, they have names," he said, speaking the Ojibway words aloud.

"Some things have characteristics; you have a word to describe it."

Back on campus, Meawasige fillets the fish caught that morning.

He again uses the experience to put his new vocabulary into context, slipping effortlessly from English to Ojibway as he dissects the pike.

"Look at that, it's the liver, eh?" he said, for the benefit of those who don't understand Ojibway.

Nearby, in the lodge, Ningewance gives students instructions for a simple debate: What is the better pet: a cat or a dog? 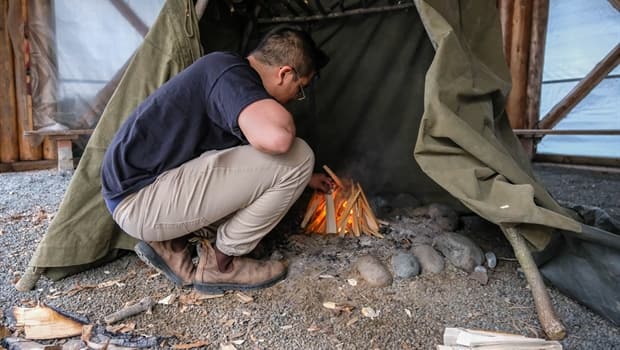 'It's a lot of our world view and the understanding of our relationship to the land, to each other'

2 years agoVideo
0:55
A student describes why learning Ojibway allows for a fulsome understanding of his culture. 0:55

As the students make their opening statements, they glance at their notebooks, struggling for the words. They gesture and laugh, slipping in the occasional English word.

"They have a lot of very good arguments," Ningewance explained. "Dogs eat their poo. Cats look after themselves. Cats eat mice and keep the house clean.... Dog, [or] wolf, became man's best friend."

When asked which side won, they all put up their hands.

"It's a draw," Ningewance said with a laugh.

It's moments like these that give Ningewance energy and hope for the future, she later explained.

"What we're doing here, it's so urgent, because people my age, we're dying. We have diabetes, we have all sorts of ailments and the language is dying with us," she said. "So we're in the 11th hour for language, and that's why activities like this are so important."

Ningewance wants to see more immersion programs at schools and universities across Canada.

While there are language courses offered for all levels of education, she firmly believes becoming fluent is more than just conjugating verbs and learning vocabulary. It's about making the language part of everyday life.

"I have a memory: being aware that there was nothing in the world that I could not express in my language. My mind could do somersaults in the language. Now I'm losing the ability, because I'm surrounded by English everyday," Ningewance said.

She and other Ojibway speakers are working — formally in committees and informally by phone — to coin new words and modernize the language.

The goal is to create consistent terminology in areas like science and art, and to provide those materials to fellow teachers, so they don't have to resort to English words.

The next step, she said, is to have a wide range of books and movies written in Indigenous languages, giving people access to popular entertainment in their mother tongues.

It's a big responsibility, but Muldrew says he is ready.

"Sense of community, that's a really big thing," he said.

"So many of these communities are struggling with different problems … problems with the government, things like that. There's a disunity you see a lot of times.

"I guess that maybe, [that] can be healed by the language." 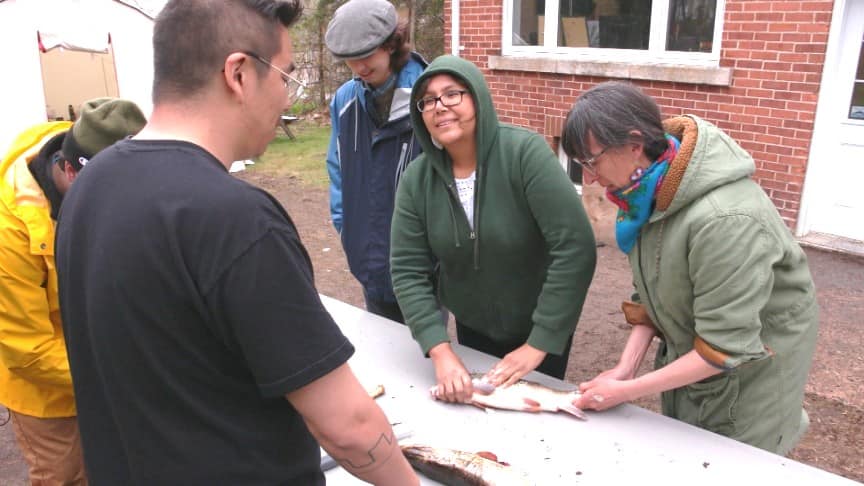 2 years agoVideo
6:42
Sharing the Ojibway language with a new generation of Indigenous youth. 6:42