The situations in Neskantaga and Slate Falls are examples of the challenges Ottawa faces meeting its target to clear all long-term boil-water advisories in First Nations by March 2021.

The filtered water station by the motel overlooking Attawapiskat Lake is the only place Neskantaga First Nation residents can get clean water for free. And project co-ordinator Roy Moonias is worried about elderly people slipping on ice formed from spills when temperatures drop below freezing.

The small, outhouse-like structure — which serves the community of some 300 people — "shouldn't be here," said Moonias. Neskantaga was supposed to have a new water treatment plant back in May.

"Now we have to suffer more, using this system."

The fly-in Ojibway community, about 433 kilometres north of Thunder Bay, Ont.,, is under the country's longest unbroken boil-water advisory, first imposed in 1995.

It was supposed to be lifted this past spring, but things didn't go according to plan.

It's an example of the challenges Ottawa faces meeting its target to clear all long-term First Nations water advisories by March 2021. Even when projects are announced and money flows, remote communities pose challenges. Weather is particularly disruptive from fall through spring, and if equipment breaks and it can take weeks to get new parts. Those delays often lead to finger-pointing. 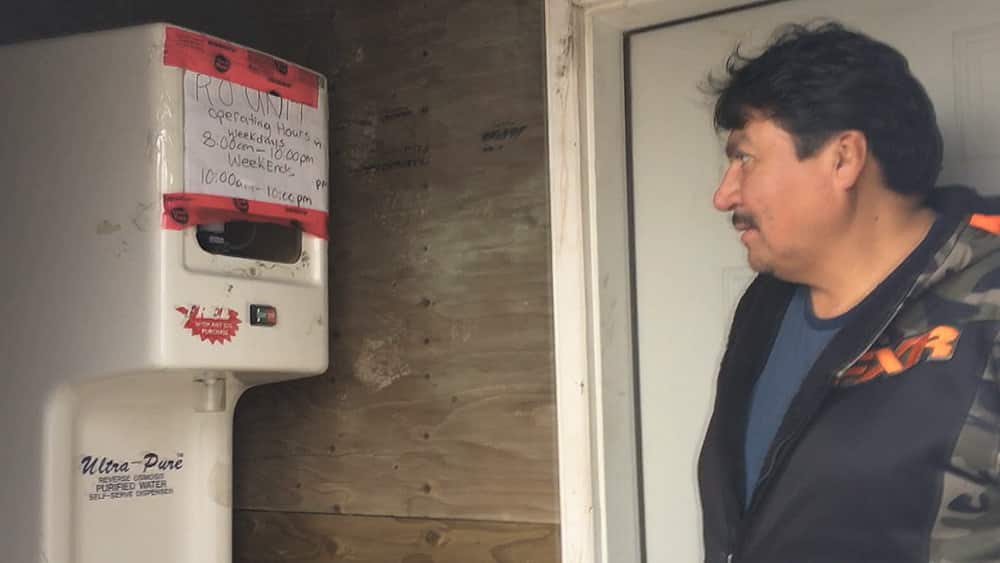 2 years ago
1:49
This water station is the only free filtered water available on Neskantega First Nation. The band's projects coordinator, Roy Moonias discusses the issues with it 1:49

Ottawa said in December 2015 Neskantaga would get a new water treatment plant, committing later to completion in "late spring 2018."

Moonias says the community is growing frustrated with the slow place.

He says Indigenous Services budgeted $8.8 million for the project. Kingdom Construction, based in Ayr, Ont., offered to do it for $5 million, though he now expects delays will drive the price up. Technically, the community must foot the bill, though Ottawa has said it's willing to help with cost overruns.

"But other projects met their schedule," he said Moonias, referring to a recent sixplex for community elders now approaching completion.

"I don't see why they shouldn't have met their own schedule."

Part of the problem centred on the need for a new cement mixer, which Indigenous Services bought for $80,000 and took three weeks to get to the community, in November 2017.

Gordon Heslov, operations manager for Kingdom Construction, says the project has faced logistical and equipment problems, but could be completed early in the new year.

Heslov said the company brought in the new cement mixer — which had to be taken apart and sent by air — because the community's own mixer didn't work. Heslov said the new one had to be re-assembled and then tested before any pouring for the project could begin.

Other issues cropped up like excavators that didn't work, design problems with the roof and a delay in the availability of a construction camp, Heslov said.

"Everybody is working diligently to get the community off its water boil advisory as soon as possible," he said.

After 14 years of advisories, the Ojibway community, about 122 kilometres north of Sioux Lookout, Ont,. thought it could finally drink straight from the tap.

But equipment glitches led to a precautionary boil-water advisory in late August that remains in place.

"I think it should have been corrected more quickly that it has taken," said Head Coun. Glen Whiskeyjack, who oversees special projects.

"I know people, my community members, they are starting to get concerned. They said they spent $12 million on this plant and they can't drink from the tap."

Kingdom Construction was also involved in that project, but Heslov said the problem has nothing to do with his firm's work. He said it lies with equipment pre-selected by the consultant for the First Nation.

"All we do is put in what they say. We have no choice in the matter," he said.

Indigenous Services said in a statement that the problems stem from monitoring and data logging by components in the plant.

It said the advisory was put in place because of these deficiencies, but has nothing to do with the plant's ability to produce clean drinking water.

Indigenous Services said it is working with the First Nation to ensure the outstanding problems are solved, but wouldn't say when they would be fixed.

Philpott said she knows her government's clean drinking water promise is more than just simply checking off a box on advisories.

"I don't think we should be giving people the impression that everything will be solved and there will be no further investment to make and no more work to do when all these water advisories are lifted," said Philpott.