Delilah Saunders 'grateful and outraged' by struggle to get liver transplant

From her hospital bed in Toronto transplant unit, Indigenous rights advocate Delilah Saunders says she's both 'grateful and outraged' by her experiences since being denied a liver transplant for having a history of alcohol use.

From her hospital bed in a Toronto transplant unit, Indigenous rights advocate Delilah Saunders says she's both "grateful and outraged" by her experiences since being denied a liver transplant for having a history of alcohol use.

Saunders, 26, was admitted to hospital two weeks ago and diagnosed with acute liver failure. She said she was told by doctors that she needs a liver transplant, but because she's struggled with alcohol use within the last six months, was denied access to an organ transplant waiting list.

"The uncertainty of whether or not I need a liver or if I would get a liver — that scares me," said Saunders, whose condition has been improving slightly over the past two days.

The agency that co-ordinates organ donations and transplants in Ontario, Trillium Gift of Life Network (TGLN), requires patients with alcohol-associated liver disease to be alcohol-free for six months before being accepted as a patient.

The policy has been the focus of much debate since CBC News first reported on her ineligibility, and has prompted Amnesty International and Indigenous organizations to call for her acceptance.

Saunders said that, while she'd achieved "huge personal milestones" in her sobriety, she relapsed after she spoke about the murder of her sister, Loretta Saunders, during hearings of the national inquiry into missing and murdered Indigenous women and girls in October.

Saunders said she thinks the policy comes from the "stigmas" around alcohol-associated liver disease, and she's now fervently advocating to change that. Hearing from families of people who've been denied transplants because of alcohol use, and died, has had an emotional impact on her, she says.

"I think there needs to be more support for people who face the stigma of addiction issues," she says. "[The policy] is damning someone who already has a disease."

While she is gaining back some strength, Saunders says she's still struggling with the symptoms of acute liver failure and exhaustion. "I've been unconscious for a while," she said. "I didn't even recognize my little brother when she showed up and he's, like, my whole world." 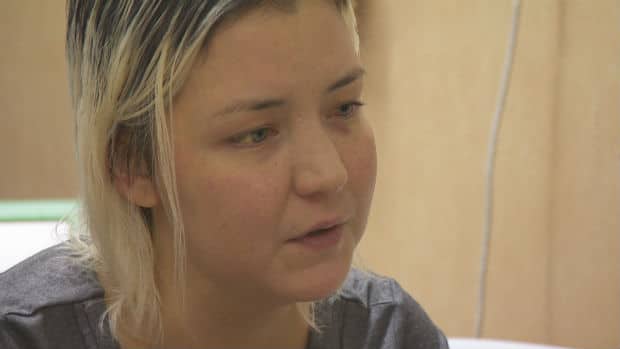 Why Delilah Saunders believes she should get a liver transplant

3 years agoVideo
1:45
The Indigenous rights advocate was denied access to a liver transplant wait list based on a history of alcohol use disorder. 1:45

Her brother Garrett was one of dozens of supporters who came from across the country — to Ottawa, where she was first admitted, and Toronto — to help organize vigils, housing and fundraising. Saunders says the support has been "overwhelming," adding that complete strangers, and even a "bad ex-boyfriend," have come forward offering tissue donations and other assistance.

The support has given her an opportunity to "get back to Delilah" — that is, back to her former, activist self — to start advocating for the people who don't have a large support network or background in rights-issues.

"They don't know that they can challenge the policy, and demand better care. They can create change within a system that desperately needs to change."

TGLN turned down an interview request for this story. It instead re-issued an earlier statement saying the sobriety policy was put in place on the advice of physicians and will not change, if at all, until after a pilot project next summer, which will determine if there is any "evidence-based basis."

Reports suggest that up to 100 people with histories of alcohol use could be accepted as patients.

Saunders says that while the program is an important step, it's leaving people like her at risk in the meantime.

Immediately, Saunders says she and her family are focusing on her recovery, but are keeping in touch with those who are supporting their push to change the six-month-sobriety policy.

"I'm so grateful to have my friends and family around me," she said. "I just hope that everyone is well, and keeps striving for a better [health-care] system for all of us."