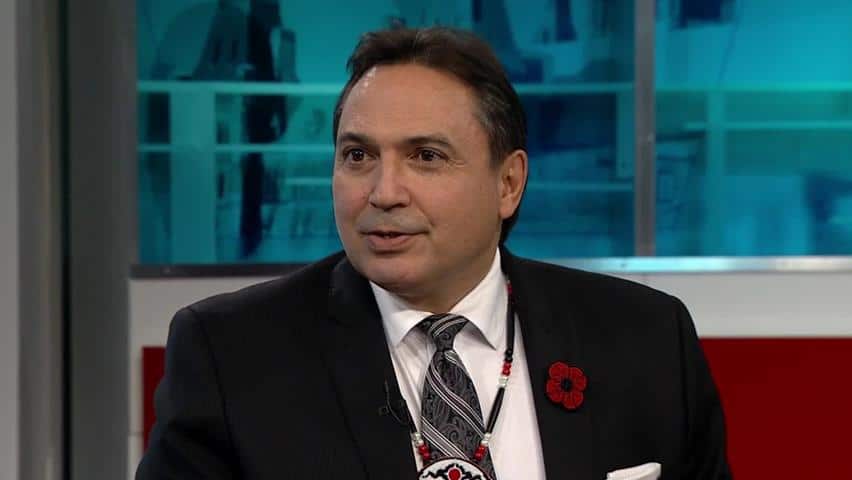 Perry Bellegarde on the new cabinet

5 years ago
5:44
AFN National Chief responds to the swearing-in of the new Liberal cabinet 5:44

"I was very impressed with the opening ceremony, but even more impressed that out of eight aboriginal members of Parliament that were elected, two have made it into cabinet," said Bellegarde.

Jody Wilson-Raybould was appointed justice minister, while Hunter Tootoo becomes the minister of fisheries and the Canadian Coast Guard.

"One of the most important things is to start rebuilding the relationship we have in a co-operative and a collaborative manner," said Bellegarde.

"I had a brief meeting with her there, right at the grounds … she said, 'Let's get to work Chief'"

That kind of hopeful reaction is sweeping through the country among indigenous people.

Tanya Kappo, a lawyer and activist from the Sturgeon Lake Cree Nation in Treaty 8, calls Wilson-Raybould's position a strategic one.

"She's an indigenous woman who will be heading up the Justice Department which I expect would have a critical role in how the [murdered and missing indigenous women] inquiry rolls out or shapes up," she said.

Kappo was instrumental in mobilizing the Idle No More movement in 2012 and has always pushed for an inquiry.

"It really speaks to some of the desires of the communities about having indigenous women lead the inquiry."

Stewart Phillip, grand chief of the Union of B.C. Indian Chiefs, shares the view that Wilson-Raybould's role will be crucial.

"I think that work will proceed very very quickly, but the other issues of housing, homelessness and poverty are certainly issues that will also be something the Trudeau government will need to focus on," Phillip said.

"Not to mention the multitude of outstanding justice issues and repairing the damage of the unilateralist legislative government of the Harper government that was so oppressive and repressive and disrespectful to the indigenous rights of this country."

Lori Idlout, a law student from Iqaluit, is a fan of Hunter Tootoo's leadership skills.

"I really hope that he represents what our realities are in the North and the Arctic, because fisheries is still not considered an important issue," Idlout said.

She believes through Tootoo's new position, he could change Nunavut's status in terms of being a "marginalized economy."

Nunavut Premier Peter Taptuna said Tootoo is a "good fit" for the cabinet appointment. "He's got experience in that and time will tell. Of course, we will be helping him along and meeting with him on a constant basis and I'm sure we'll be working very well together, said Taptuna.

Phillip is also impressed with Bennett being sworn in as the indigenous and northern affairs minister.

"I believe she has an understanding and a passion for a lot of the issues," he said.

Phillip said that as former aboriginal affairs critic, Bennett spend a lot of time on the ground with both grassroots people and politicians.

"I recall during the Idle No More movement and more particularly Chief Theresa Spence's hunger strike, Carolyn Bennett pretty much spent a lot of time with Spence and was deeply involved in what that represented."

The head of the Truth and Reconciliation Commission also took notice of Bennett's involvement over the years.

"She's been a strong advocate for the work of the commission as we were going along," Justice Murray Sinclair said.

"She was at our release of our summary report [in June] so I think overall it's a good day for reconciliation in Canada because I think this will be something that will be high on her agenda."

While Kappo calls the move to appoint two indigenous people to cabinet a strategic one, she maintains a sense of skepticism.

"We are always very mindful now of whether or not them being indigenous in that position actually makes a difference for us," Kappo said.

Kappo was referring to former Conservative MP Leona Aglukkaq, who held two cabinet posts. In 2008, she was appointed minister of health, and in 2013 she became minister of the environment.

"It didn't make a difference in regards to the priority of the indigenous people of the North," Kappo said.

"When the concerns came out around the environment and the omnibus bills it wasn't relevant that she was an indigenous person," she said.

"I am always willing to give them a chance to see if they will hold true for indigenous interests in advancing our agenda or if they will have to end up to toe the party line."

Former Assembly of First Nations national chief Phil Fontaine is a Liberal Party member and helped on the campaign trail.

"I watched the swearing-in. It was exciting, bold moves," Fontaine said. "It's going to become a more inclusive department. It's going to be a ministry that serves the interests of all Indigenous Peoples."

But Fontaine offers words of caution for his own community.

"We have to be careful, at least on our part, the indigenous community — that we temper our expectations somewhat, so that we give the government the time and space to do its job."

Tiar Wilson was raised in Opaskwayak Cree Nation, Manitoba. She's reported for APTN National News, CBC Winnipeg, and CBC North. Tiar is also involved with CBC's database of missing and murdered indigenous women and girls and continues to share the stories of these women, their families and communities. She's currently reporting for CBC Aboriginal. @yourpaltiar.

With files from Susana Mas and CBC North