In March, the Ontario Women's Hockey Association permanently banned Jenya Feldman for verbal abuse and threats of violence against players. But the private hockey academy owner is still on the ice with teen girls, and authorities say they can do little about it.

Jenya Feldman moved his players and program to Florida, and Canadian hockey bodies say they can't stop him

An Ontario girls hockey coach who was recently handed a permanent suspension for verbal abuse and inciting violence is still on the ice with his teenage players, skirting a ban that Hockey Canada admits it is powerless to enforce.

On March 6, the Ontario Women's Hockey Association (OWHA) suspended Jenya Feldman for a minimum of 15 years, after determining that he harassed and bullied his players during a heated December 2020 team meeting.

The discipline board's decision, based on an audio recording made by a player, found that the 45-year-old coach violated association codes of conduct with behaviour that was "tantamount to inciting and condoning violence," and "extremely inappropriate in any setting."

Under the terms, Feldman is not eligible to apply for reinstatement until at least May 31, 2036.

"Subject only to the right to reapply described in this decision, Jenya Feldman is permanently suspended from all OWHA/Hockey Canada-sanctioned hockey and activities," the finding reads. "The OWHA discipline board is of the view that there is no place in the OWHA program for adults, especially coaches, who emotionally abuse players."

But the lengthy ban has had little apparent effect on Feldman, who operates his own sports boarding school, the Hockey Training Institute, in Utopia, Ont., just west of Barrie.

He continued to work with students at the academy, which charges about $35,000 a season in tuition and fees, and then left for Florida in mid-April with a travelling team in an effort to showcase his players to U.S. college recruiters.

It's not clear whether HTI plans to operate in Canada or the United States next season, but the academy's website continues to advertise its upcoming summer programs.

Threats of violence and lots of swearing

CBC News has obtained a copy of the recording of his Dec. 5 meeting with a group of about a dozen players, aged 14 to 18.

It captures a profane and enraged Feldman expressing his unhappiness over a breach of the academy's COVID-19 bubble and divisions between team members. In slightly more than 33 minutes, the coach uses the f-word, or its variants, 156 times, and uses a disparaging term to describe people with mental disabilities as he berates his players. And he repeatedly suggests that some of the girls deserve to be punched.

"If you were on the guys' team, you know what would have happened? You would have had your face punched in. So you're lucky you didn't get that," Feldman said at one point, focusing his anger on a particular player. "You're lucky…. If she was a guy, I would have asked her to punch your face in. You understand?"

Later, he said: "I'll explain to you, all of you are f--king nothing until you get to a certain point. 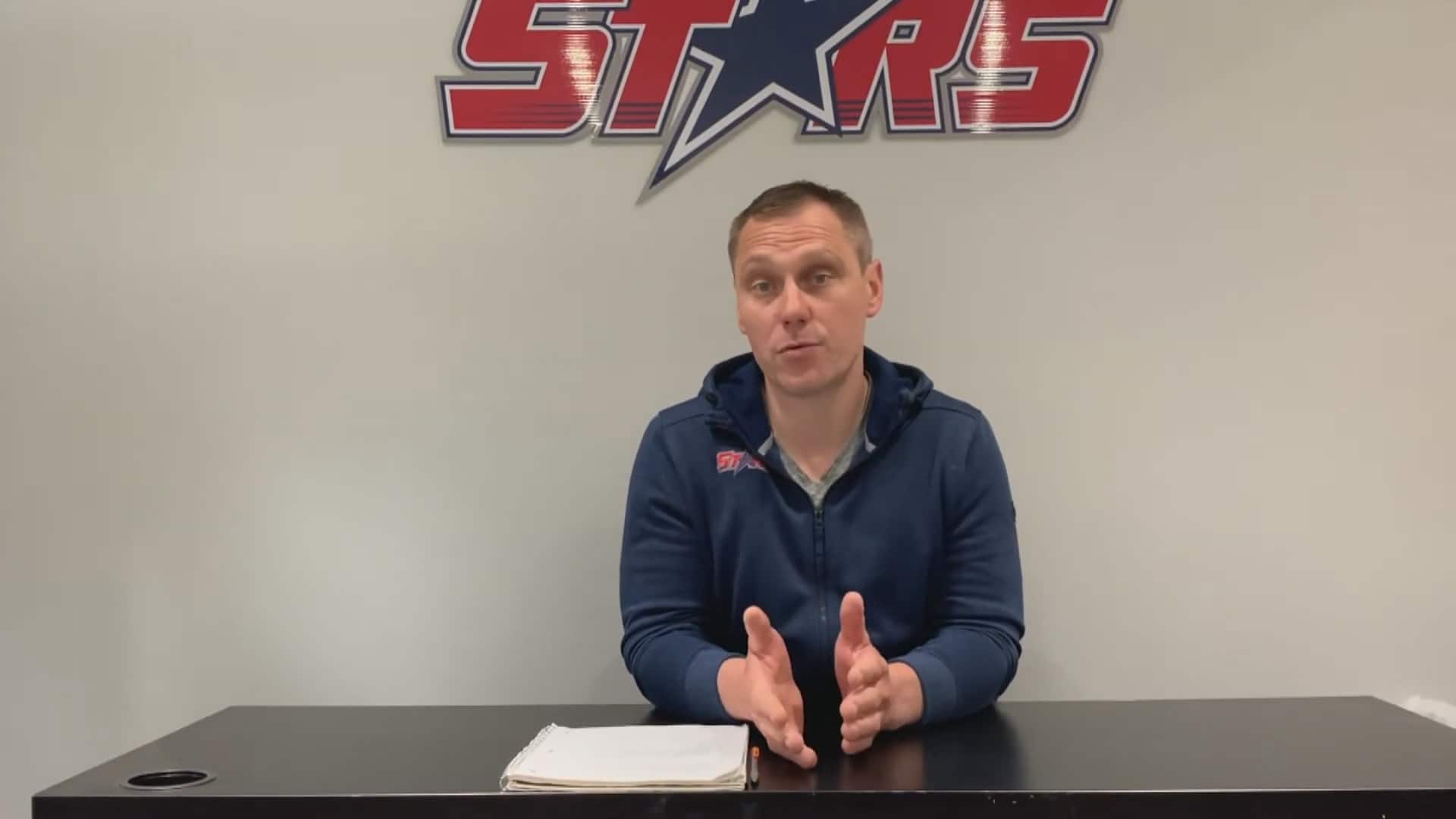 CBC News0:22Hockey coach lashes out
In this audio of a December 2020 team meeting captured by one of his players, Jenya Feldman, the head coach of the Hockey Training Institute near Barrie, Ont., berates a group of teenage girls.

The OWHA discipline decision notes that Feldman called a second team meeting on Dec. 6, 2020, to apologize for his conduct. But the panel rejected his assertion that his outburst was "out of character and not normal," criticizing the coach's "profoundly disturbing effort to abdicate responsibility for his own conduct."

Naida Duffett, the 18-year-old player from Ottawa who made the recording, told CBC News it wasn't the first time Feldman had lost his temper with the group, and that she wanted proof of his behaviour to present to her parents and other adults.

"He was very, I'd like to say, unhinged. He seemed very angry," said Duffett. "A lot of it was very vulgar. He picked out players. He demoralized them."

Duffett, a goaltender who will play for Carleton University next season, said Feldman's language and behaviour shocked her.

"Never in my life. I've never experienced that," she said. "I've played through boys competitive hockey, girls hockey in Alberta, like I've played most levels, high school, everything. I've never come across anyone, ever, who had talked to a kid, or an adult even, like that."

'I was bawling my eyes out'

Another player, the teenager who bore the brunt of the December rant because she had questioned the team captain's leadership, said that night was the culmination of a miserable fall, where Feldman had repeatedly criticized her weight and accused her of exaggerating a hip injury that limited her training and ice time.

"Honestly, I wish I defended myself more than I did. It made me feel really angry at the time," said the 16-year-old, who has asked not to be identified over concerns about her hockey future. "I left and I was bawling my eyes out, I called my grandpa and my auntie and they were telling me that I was going to be OK."

Both girls were pulled from the Hockey Training Institute by their parents following the December incident, part of a six-player exodus.

But Feldman has soldiered on with his remaining students, relocating his HTI All Stars team to Florida just weeks after his suspension. The academy's Instagram feed has since provided glimpses of pool parties, beach outings and Sea-Doo excursions. There are also shots of Feldman on the ice with his teenage charges during practices and going over footage in post-game meetings.

Donna Duffett, Naida's mother, said she can't understand how the coach can be subject to a permanent suspension by Canada's hockey bodies — technically banning him and his team from most leagues and tournaments — yet still be carrying on business as usual, both in Ontario and south of the border.

Hockey bodies say they have no solution

Ontario Women's Hockey Association president Fran Rider declined an interview request, but in a brief email statement to CBC News, acknowledged that "the OWHA, as well as Hockey Canada and its members, have no jurisdiction over private hockey programs in the United States or elsewhere."

Hockey Canada also declined to provide an interview, but spokesman Spencer Sharkey confirmed that the national governing body was aware of Rider's 49-word statement and that "the information is completely accurate."

Dave Fischer, director of communications for USA Hockey, said it faces similar issues in upholding the Canadian coaching ban in the United States, especially when it comes to a private academy training and playing on rented ice.

1 year ago
Duration 2:01
An Ontario girls hockey coach was given a lifetime suspension after an audio recording of him verbally abusing players during a team meeting emerged. Since his suspension, the coach has moved his team and private hockey program down to Florida, where Canadian officials have no oversight.

"USA Hockey's authority is only within sanctioned programs, and those outside of USA Hockey we do not have authority over (i.e. HTI)," Fischer wrote in an email to CBC News. "Further, USA Hockey does not govern rinks."

The March discipline decision makes reference to two prior suspensions for Feldman by the Ontario Women's Hockey Association — the first in 2014, when he was coaching a girls under-20 team, and then again in February 2020 with his HTI squad.

The OWHA did not respond to questions from CBC about the nature of the offences or the length of the punishments.

The whole experience has left former HTI student Naida Duffett feeling like her efforts to expose a wrong and protect her teammates from Feldman have failed.

"They still trained, they still worked out. He was there at the workouts," she said. "They were posting all of this on their social media. It's like nothing changed."

Jonathon Gatehouse can be contacted via email at jonathon.gatehouse@cbc.ca, or reached via the CBC's digitally encrypted Securedrop system at https://www.cbc.ca/securedrop/