An Ottawa hospital is challenging the legality of gene patents that hamper the ability of doctors to freely screen for potentially deadly genetic diseases without fear of being sued for patent violations. 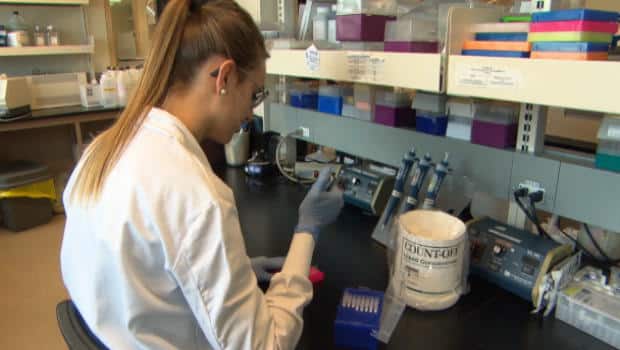 6 years agoVideo
2:09
Some U.S. companies hold patents on genes and genetic tests in Canada that prevent Canadian hospitals from doing their own tests on patients here 2:09

An Ottawa hospital is challenging the legality of gene patents that hamper the ability of doctors to freely screen for potentially deadly genetic diseases without fear of being sued for patent violations.

On Monday, the Children’s Hospital of Eastern Ontario (CHEO) started a legal process in Federal Court that could decide if human genes can be patented in Canada.

"The core position really is that no one should be able to patent human DNA," said Alex Munter, president and CEO of the Ottawa-based CHEO. "It would be like patenting water or air."

"It’s about whether Canadian hospitals can provide genetic testing to Canadian patients and really give them the top quality of care," said Richard Gold, a lawyer and intellectual property expert at McGill University in Montreal, who is advising the hospital pro bono.

Currently, some genetic tests can’t be done in Canada because U.S. companies hold patents on the tests and the genes and have threatened legal action if the patents are violated by doing the tests in Canada, rather than the U.S.

The U.S. Supreme Court ruled last year that naturally occurring human genes can’t be patented and threw out patents held by Myriad Genetics Inc. to look for mutations on the BRCA 1 and BRCA 2 genes associated with much greater risks of breast and ovarian cancer, including a mutation that actor Angelina Jolie revealed she inherited.

CHEO’s case centres on patents for genes associated with long QT syndrome, an inherited heart rhythm disorder that typically presents for the first time as a fainting spell or seizure during exercise or tragically in sudden death, said Dr. Gail Graham, head of the genetics department at CHEO.

"Genetic technology is just exploding. It's increasingly embedding itself at the heart of medicine," Graham said in an interview.

"Genes are not inventions. They belong to all of us," she added during a news conference.

Long QT syndrome is treatable, but it often results in sudden death of a young person. With genetic screening, doctors aim to treat it before tragedy strikes.

"Our doctors and scientists simply cannot accept the prospect of child dying or potentially being orphaned because a patent prevented us from diagnosing and treating a serious life-threatening condition," Graham said.

The hospital is not allowed to screen for genes associated with long QT syndrome because a U.S. company has patented the test and the genes.

"One of the licensees that's holding these patents wrote a letter to Ontario and said, ‘By the way, we have a patent here: stay away," said Gold. "So Ontario did stay away. And so we have a very concrete example of this patent holder trying to hold up Ontario labs and hospitals from being able to deliver this test."

Beyond the specific example of long QT syndrome, CHEO hopes the Canadian legal case will also clear the way to allow more advanced genetic testing that can screen thousands of genes linked to human genetic conditions.

For example, if a newborn in the neonatal intensive care is thought to have a genetic condition that can’t be identified conventionally, it’s now possible to take a blood sample from the baby and read through about 5,000 genes that are associated with genetic diseases.

"If we were to incidentally discover that that child would have long QT syndrome, that wasn't what we were looking for, but we found that it was there, we would be prevented from learning that information and prevented from transmitting it to the patient and the family because of the existing patents," Graham said.

"What we are trying to achieve from a broader perspective is a court ruling that says, ‘No, these particular patents are invalid or would not be infringed by the type of testing we would like to do.’"

'I figured I was in trouble'

Stephen Hitchcox, 57, of Toronto nearly drowned in a swimming pool after an episode of long QT syndrome last year.

"I figured I was in trouble, and I went and reached for the rope," he recalled. "I just passed right out."

"If you have a history of people that have heart problems and maybe died early from heart [problems], you should be careful. Ask your doctor about it."

The U.S. labs charge about $4,500 US per person for the two-step test, the hospital said. Both steps aren't always needed, but CHEO said it can do the test for about half that amount. Ontario's Health Ministry estimates it could save approximately $200,000 a year if that test was done here, Graham said.

With files from CBC's Kelly Crowe and The Canadian Press