Health Canada plans to fast-track new sources of certain medications following reports that shortages due to a production scaleback at Sandoz Canada's Quebec plant have led to cancellation of some elective surgeries, an Ottawa spokesman says. 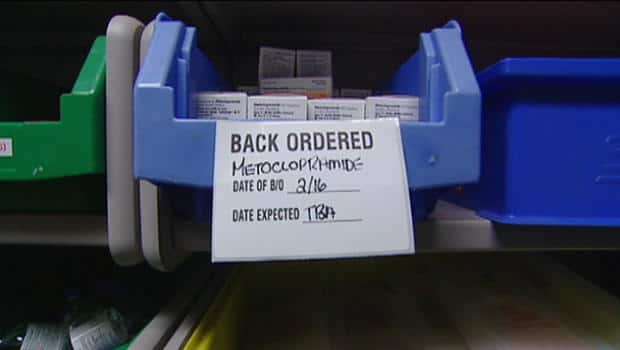 9 years ago
2:54
The temporary shut-down of a drug manufacturing plant in Quebec is leading to a shortage of some key medications in Canadian medical facilities, CBC's Kelly Crowe reports 2:54

Health Canada plans to fast-track new sources of certain medications following reports that shortages due to a production scaleback at Sandoz Canada's Quebec plant have led to cancellation of some elective surgeries, a government spokesman said Tuesday.

"We’ve seen an interruption of the supply, and principally of injectable medications for hospitals ... what we're hearing is  certain elective surgeries are being cancelled as they scale back, and there’s widespread concern," Dr. Robert Cushman, director general biologic and genetic therapies at Health Canada, told CBC News from Ottawa.

Health Canada's role as regulator is to help suppliers and hospitals identify other sources of supply, and "we can expedite that because we do have arrangements with similar organizations like the [Food and Drug Administration] in the U.S. where these medications meet our standards."

Last month, Sandoz announced it was scaling back production of certain drugs — mostly painkillers, antibiotics and anesthetics —  to upgrade operations after quality-control assessments by the FDA warned the factory fell short of its standards. To exacerbate supply concerns, a fire Sunday in the ceiling above the boiler room of Sandoz's Boucherville plant has halted all production until at least Monday, and the company says it is assessing any impact to product supply.

Cushman didn't give specific names of hospitals postponing elective surgery. But some media reports say the Gatineau and Hull hospitals Quebec, for example, have cancelled some elective procedures.

Cushman confirmed Health Canada inspectors were at the plant on Monday after the fire.

He said while word of drug-shortage concerns have been expressed across the country, "we’re concerned about this overall."

Cushman said Health Canada is in constant dialogue with Sandoz and other manufacturers, as well as the provinces and hospitals, as a result.

"We can fast-track these alternate sources, but there are some things have to do to expedite them — we have to look at the plant, the source, the medication … we understand it’s incumbent to do this as quickly as possible while guaranteeing safety," he said.

"Usually these things take months, but we can certainly reduce that," Cushman said, although he wasn't able to give a specific deadline.

While Sandoz has said it's continuing efforts "to maintain reliable supply of essential medicines," provincial governments, hospitals, critical-care and other interests are expressing deep concern.

One Alberta doctor, for instance, has said the growing national hospital drug shortage is forcing him consider alternatives when treating patients.

"[Health officials] are trying to keep us supplied but it's a week-by-week basis," said Dr. Dave Welch of Peace River. "It makes you think more when you start prescribing medications."

Officials with Alberta Health Services are also asking doctors to conserve medication every chance they can.

In Ontario and other parts of the country, some hospitals are sharing their drug supplies with other hospitals that may not have sufficient quantities.

David Jensen, of the Ontario Ministry of Health and Long-Term Care, says ministry officials are working with Health Canada and the Public Health Agency of Canada (PHAC) on national strategies to address the shortages.

But Jensen says the ministry is also concerned that Sandoz, which received the FDA warning in November, only began advising customers that it was scaling back production in mid-February.

"This is unacceptable," he said. "Last year the federal government promised to take action to improve the notice that manufacturers provide to the health system of impending supply issues. The result was to encourage voluntary notice by manufacturers.  As recent events show, this approach is not working."

Ontario and other provinces are pressing Ottawa for a national reporting system that would include "consequences for drug  companies that fail to supply the marketplace and/or give adequate notice of supply disruptions," Jensen said.

Myrella Roy, executive director of the Canadian Society of Hospital Pharmacists, says hospitals typically have a few weeks of inventory on hand for any drug based on its typical usage. "So when they're notified that a particular drug or number of drugs –as is case with the Sandoz situation – might be in short supply, they can only fall back on a few weeks worth of inventory," she said.

"Right now hospitals seem to be coping, but everyone is on high alert. All hospitals across Canada are trying to cope as best as they can, but there are a lot of concerns because the consequences could be significant across the country with the possibility of cancelling surgeries, delaying treatments for some patients, and that health-care professionals may have to use drugs that aren't their first choice of drugs — meaning they would have to go to a second or third choice that could be less effective, more expensive or more toxic."

In the House of Commons on Tuesday, Colin Carrie, parliamentary secretary to the minister of health, was grilled about why something hasn't been done to address drug shortages in Canada, an issue that dates well before Sandoz's problems arose.

"Hospitals have had to delay surgery, and it is Canadians who are paying the price," said Quebec NDP MP Anne Minh-Thu Quach. She said importing drugs isn't an answer to address the drug shortage, adding, "Why don't the Conservatives start by guaranteeing the quality of our medication instead of avoiding another shortage?"

Carrie responded that the government is working with their health-care partners and that the provinces and territories, which buy prescription drugs for their hospitals, know best which drugs they require based on the level of demand.

"We have made available a list of companies in Canada who are already authorized to make drugs that are in some shortages. Provinces and territories can begin discussions immediately with any of these companies and discuss whether or not they will begin production."