Can't hear your dinner date? How noisy restaurants may be harming your health

It's becoming a common complaint while eating out: Restaurants are just too loud. Marketplace examined the noise levels at some of Canada's big chains and met some people working on ways to address the deafening din of today's dining room.

Nick Politi readily admits his restaurant is noisy. His customers think so, too.

Complaints about noise levels at Nico Taverna in Windsor Ont., started when Politi moved to a bigger space down the street from his original location with more seating, high ceilings and an open kitchen.

"It was too loud," said Nancy Sulji who was sitting at a large table with six others one Friday evening in September, celebrating a friend's birthday. "I was screaming to talk to the rest of the table."

Politi conceded the noise problem had become an annoyance for both customers and staff.

"I can't even hear people on the phone. We have to go into a back room to talk to them," he said.

Noise levels in restaurants is a topic that gets people talking.

When Marketplace surveyed restaurant-goers about their experiences through an online questionnaire in our newsletter and on social media, almost 1,500 people responded.

Nearly everyone — 98 per cent of respondents — said noise levels have negatively affected their dining experience, and 63 per cent said they have even left a restaurant because it was too noisy.

Almost every respondent said noise levels have made it difficult to hold a conversation while eating out.

That can be especially vexing when out on a first date.

Trying to talk over clamouring plates and the hum of background music while also dealing with first-date jitters can be daunting.

"You're kind of setting yourself up for failure," said Gregory Scott, who has hearing loss.

The anxiety he felt in such situations spurred the New Yorker into action around four years ago.

He started measuring the sound levels in his favourite restaurants and compiling a list of quiet venues for future dates. Soon enough, his friends were asking him for his list.

Not long after came the epiphany: Why not create a crowdsourced app?

In Spring 2018, Scott launched SoundPrint. The app has a built-in meter that measures sound levels for at least 15 seconds, recording levels in real time, as well average and maximum decibels.

University of Nebraska researchers tested the app against a precision-grade sound level meter and found it to be accurate, give or take 1.2 dB.

Since the app first launched, restaurant-goers have submitted more than 90,000 readings from venues in 50 different countries, Scott said.

How loud is too loud?

Loud restaurants aren't just annoying — they could be hazardous to our health.

According to the World Health Organization, anyone exposed to sound levels over 85 decibels for more than eight hours could be at risk of hearing loss. This is about the same sound level as a leaf blower or gas-powered lawn mower.

And for every 10 dB increase, the noise sounds nearly twice as loud to our ears.

Rick Neitzel, an exposure scientist at the University of Michigan, is more conservative when it comes to noise exposure. He says it's best not to be exposed to more than an average of 70 dB a day or you risk hearing loss over time.

There is some evidence, he said, that nine out of 10 people who live in urban environments are exposed to a lot more.

"That suggests that a lot of people are going to have hearing loss. We often attribute that to age, but I'm going to argue that it's just from unrecognized noise," he said.

Even lower amounts of noise over a 24-hour period can impact health, Neitzel said. This is because noise is a stressor that activates our adrenal, fight or flight response. Over time, this can lead to everything from heart problems to cognitive effects and, potentially, mental health problems.

"When we talk about these cardiovascular impacts — hypertension and heart attacks — we're talking more down in the 45- to 55-decibel range as a 24-hour average," he said. 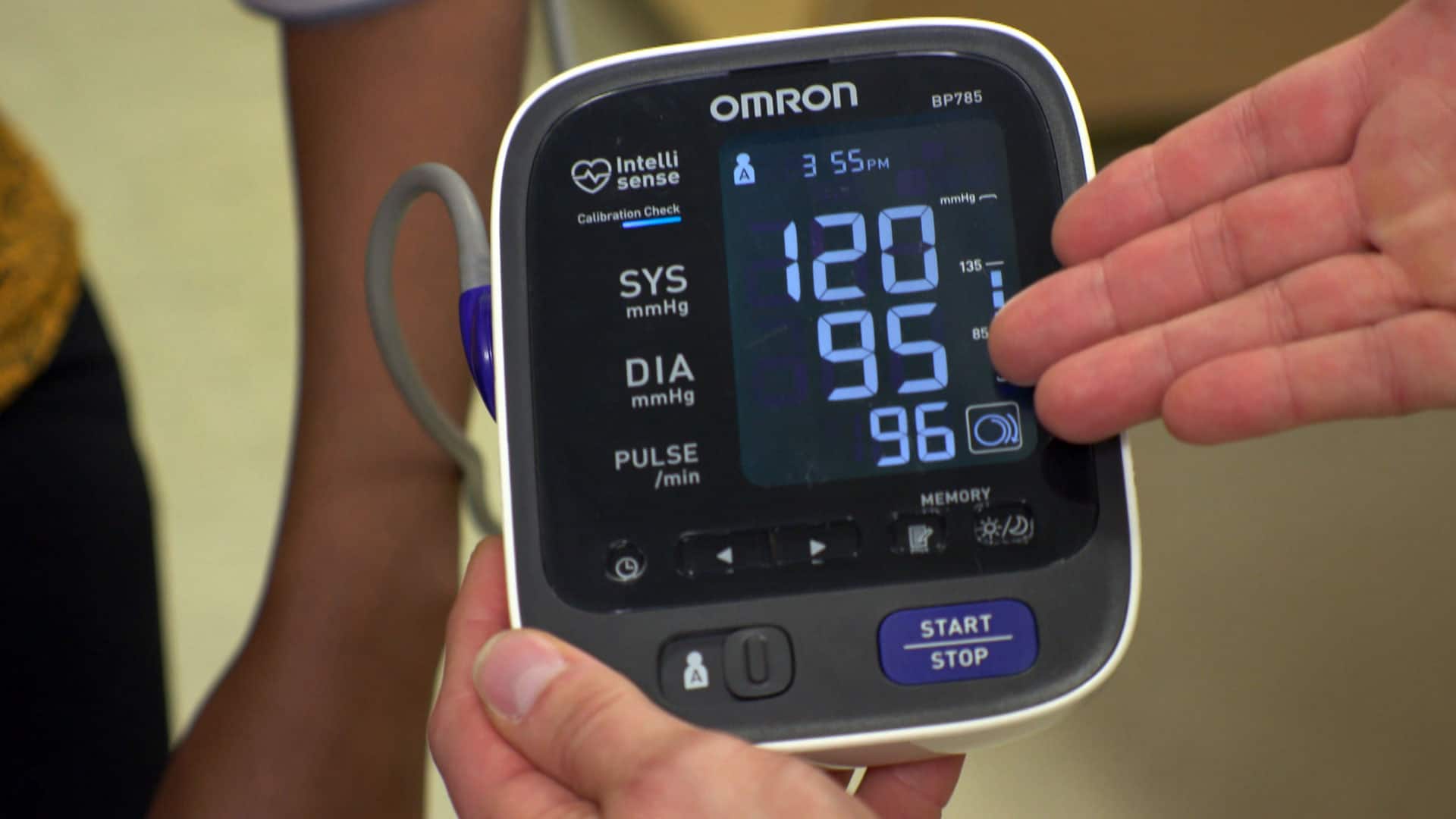 How loud noise could affect your heart

1 year ago
0:38
Exposure scientist Rick Neitzel tested Marketplace co-host Makda Ghebreslassie's blood pressure before and after playing 30 seconds of noise at 90 decibels. The results may surprise you. 0:38

We visited three different locations of each restaurant in Halifax, Vancouver, Calgary or Toronto on the same Friday and Saturday nights and measured noise levels using SoundPrint.

The average sound level was between about 77 and 80 decibels, with Earls registering slightly higher levels than the rest, averaging 81.7 dB at the three locations over two nights.

While levels up to 80 dB are loud and difficult for conversation, they aren't likely to harm your hearing in the short term, according to the World Health Organization.

Marketplace asked each restaurant for comment about its sound levels.

Earls chief development officer Sharilyn Mason said in a statement that guests can ask to be moved to quieter tables.

She said the company's design teams incorporate sound-absorbing materials and that softer music is played during the day and lively music during peak times.

"Earls is always open to guest comments and welcomes opportunities like this to receive feedback," Mason said.

Jack Astor's said noise is a natural byproduct of a busy restaurant, especially during peak hours. Each of its locations, the company said, has iPads equipped with noise-monitoring meters that managers are trained to use.

East Side Mario's said its customers know that its restaurants try to emulate the boisterous atmosphere of a family gathering.

Boston Pizza and The Keg did not respond.

Design has a lot to do with it

Marketplace spoke with acoustic engineers, interior designers and an architecture critic who said that trendy restaurant esthetics are often to blame for noise.

While these elements might be pleasing to the eye, they can be tough on the ear.

"The problem is sound lingering in a space for too long," said JuanCarlos Bolomey, a regional manager for Primacoustic, which helps restaurants and other businesses reduce noise levels in their spaces.

Without soft surfaces to absorb the sound, it ricochets through the space, Bolomey said. It can feel like there are a lot more people talking — or louder music playing — than there really are.

"You don't allow the sound to die down, then the noise floor goes up, and people [are] trying to talk over that and it makes them speak louder," he said.

"Add that with some kitchen noise, music, and that just brings everything higher."

At Nico Taverna in Windsor, the noise level hovered around 85 dB when Marketplace tested the levels around 8 p.m. one night — a time when the restaurant, which seats about 120 people, is usually at its busiest.

Not long after that test, Politi installed 36 large acoustic ceiling panels from Primacoustic — measuring two by four feet each and made of high-density glass wool to dampen the sound.

A few weeks later, Marketplace returned to test the sound levels and found they were in the mid-70s.

"They want to be able to talk to each other and hear each other without straining — you know, losing their voice by the end of the night," he said. "I think we've accomplished that."

WATCH | Nick Politi shows off the new noise-dampening ceiling panels he installed in his restaurant:

How one restaurant solved its noise problem

1 year ago
0:51
After receiving lots of feedback from customers, Nick Politi installed ceiling panels to dampen the sound at his Windsor, Ont., restaurant, Nico Taverna. Using the SoundPrint app, Marketplace tested noise levels before and after the change. 0:51

The retail cost of the three dozen panels Politi installed is about $6,800 — not exactly pocket change for a small business owner in an industry with razor-thin margins. But Politi, who got them at a discount, says he feels good about his investment.

"It's made a world of a difference," he said. "I would have lost too many customers."

His employees agree. Chef Greg Dawson says he was stressed by the constant hum of the intake vent above the wood-fired grill he works with all day. Now, he says, he notices his voice travels a lot farther.

"The communication between my partner and I [is] a lot easier."

Service and restaurant workers like Dawson should be vigilant about noise exposure, said Neitzel.

"Maybe if you eat out once or twice a month, this is not a big deal, but if you're eating out every night, or if you work in those restaurants eight hours a day, then we're far more concerned about you," he said.