It's the thought that counts for how much stress harms our health, research suggests.

Think your health is harmed by stress? Then it probably is 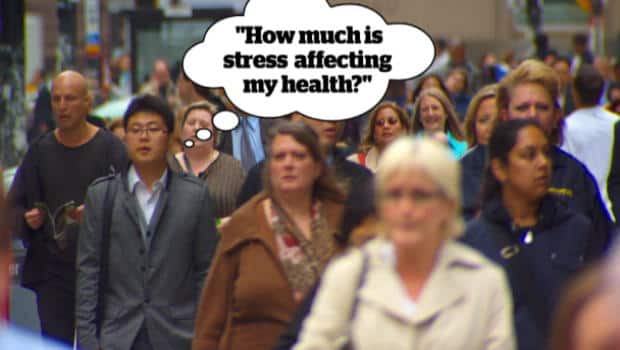 7 years agoVideo
2:40
Stress tends to have a greater impact if you believe it's doing you harm. 2:40

It's the thought that counts for how much stress harms our health, research suggests.

Researchers in the U.K. started following 7,268 civil servants when they were 50 years old and tracked new cases of heart disease for 18 years.

"We looked to see what the perceived effect of stress was on the health to the individuals in the study," said Eric Brunner of the department of epidemiology and public health at University College London.

"It seems to be a big risk if you feel your health is being messed up by stress and either you do nothing about it or you simply try to push it out of the way."

While perceived stress levels are commonly studied and known to adversely affect health, Brunner and his colleagues in the U.K., France and Finland focused on how individuals perceived stress on their health.

The main question was: To what extent do you feel that the stress or pressure you have experienced in your life has affected your health?"

In the study published in this week's European Heart Journal, the researchers found an increased risk of heart disease in people who believed stress affected their health "a lot or extremely."

"There was a doubling in the risk of either non-fatal heart attack or coronary death," among the 10 per cent of people in that group, Brunner said.

"People who feel that their job for example is really causing them problems, maybe they can't sleep during the week, maybe they take their work home with them a lot, maybe they really stress out about it, perhaps those people need to think about changing their life situation," Brunner suggested.

After having a heart attack in 2005 at age 44, Jo-Anne Swanson of Gatineau, Que., changed her life. Trying to be a "superwoman," she worked long hours as the director at a professional organization, was a light smoker and was mourning for both parents.

Swanson quit her job, quit smoking, bought a gym where she had become a fitness instructor, stopped eating junk food and took up yoga to deal with stress better.

"I feel like I'm 20 again," Swanson said. "It's just this inner feeling of peace. That's how I feel now as opposed to before."

The researchers noted they did not study blue collar or unemployed workers and the findings may not be representative of the general population. But they said the relationship between thinking about the health effects of stress and its ultimate physical toll should be taken seriously, regardless of the source of the stress — work, romantic relationships or something else.

"The impression that an individual has about the way that stress impacts on their health is something that has to be paid attention to both by the individual and by doctors, nurses, people looking after them," Brunner said.