Darek Fidyka, a man who was paralyzed from the chest down, was able to take steps with a walker following extensive rehabilitation and a transplant of cells from his nasal cavity to his spinal cord, British and Polish researchers say.

Darek Fidyka paralyzed after stab wounds to his back in 2010, recovers some voluntary movement after treatment 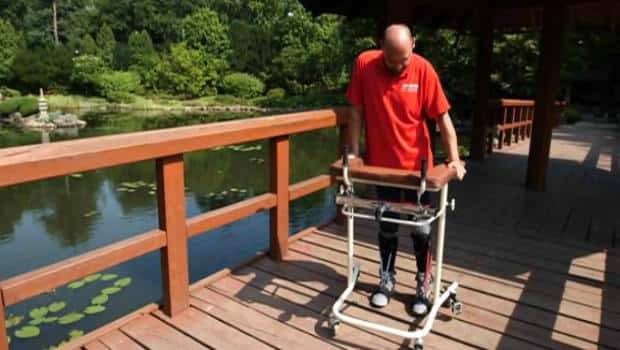 Darek Fidyka, a man who was paralyzed from the chest down, was able to take steps with a walker following extensive rehabilitation and a transplant of cells from his nasal cavity to his spinal cord, British and Polish researchers say.

Fidyka, 38, was paralyzed after suffering stab wounds to his back in 2010, which left an eight-mm gap in his spinal cord. After 19 months of rehabilitation, brain surgery, spinal surgery and a cell transplant, his left thigh muscle began to grow.

After six months, he was starting to walk at a rehabilitation centre with the help of a physiotherapist and leg braces. Two years on, he uses a walker but tires easily. His doctors say he’s recovered some voluntary movement and sensation to his legs.

"When you can’t feel almost half your body, you are helpless, but when it starts coming back it’s as if you were born again," Fidyka said in a university release.

Geoffrey Raisman, a professor at University College London's Institute of Neurology, led the research, published in the journal Cell Transplantation and profiled in a documentary by BBC’s Panorama.

"What we’ve done is establish a principle," Raisman told the BBC. "Nerve fibres can grow back and restore function, provided we give them a bridge. I believe this is the moment when paralysis can be reversed."

In the study, Raisman and his team describe how they constructed a nerve bridge between the two stumps of the damaged spinal column.

The olfactory cells together make bundles of nerve fibres in the olfactory bulb that gives us our sense of smell.

Doctors say Fidkyka now has movement around his hips and he can sit up.

Canadian experts not directly involved in the work said it’s not clear whether the recovery resulted from the cell transplantation or the rehabilitation.

"We do know that this particular patient here was not completely injured. He presented as a completely paralyzed person, therefore was classified as complete. But when you read the paper, there was a little bridge left," said Wolfram Tetzlaff, a professor at the University of British Columbia and director of ICORD, a spinal cord injury research centre.

Surgeons went in to remove adhesions and scar around the spinal cord, Tetzlaff said. "It's entirely conceivable that the recovery we see in conjunction with the aggressive rehab training is due to that. So whether the cells are actually doing something or not is premature to say."

Dr. Charles Tator is a senior scientist at Krembil Neuroscience Centre at Toronto Western Hospital, where he studies and treats brain and spinal cord injuries. He has collaborated with the U.K. scientists.

"This is just one patient," Tator said. But it does warrant a larger trial in more subjects with blinded assessors, Tator and Tetzlaff said.

Tator is cautious about video showing the patient walk with support. "We had an issue here of a quote 'breakthrough' that showed people walking after treatment for their injury which ultimately was proven to be a negative study," Tator said.

The findings do suggest that researchers are on the right track, Tator said.

With files from CBC's Kim Brunhuber and Reuters