Mike Walker can no longer have a simple conversation with his wife.

It was just four years ago, at the young age of 52, when Karen was originally diagnosed with dementia. She no longer speaks, and also suffers from agitation and physical outbursts with aggression, which can be common with the disease.

"You just can't give up on somebody, you gotta try whatever means that are out there," Mike says.

Karen has been in a long-term care facility for almost a year, and she's now part of a study by Canopy Growth and the Ontario Long Term Care Association. She is taking 20 milligrams of cannabidiol (CBD) oil twice a day, and Mike believes he has seen her level of agitation improve.

"I mean, she still gets her outbursts, but not near what it used to be. I know that it was a lot more severe there for quite awhile," he says.

As one of the country's largest medical and recreational cannabis companies, Canopy Growth, along with its subsidiary Spectrum Therapeutics, is testing medical cannabis as a possible treatment for patients suffering from pain or cognitive issues.

The research involves 100 seniors in long-term care homes across the province, and the goal is to register another 100. The study is set to continue in Ontario over the next six months.

Residents have been enrolled in waves and the program is expected to wrap up its data collection at the end of the year.

The goal of the research is to determine how effective cannabidiol is at treating some of the ailments common to seniors, and whether there are side effects.

Mike says he would do anything to help soothe Karen's pain and confusion. Since Karen started taking part in the study, he says he has seen a difference in her behaviour.

On his regular visits, for example, he plays music for her on his cellphone.

"Before, I would take my phone out and she would grab it and throw it across the floor. Now, I hold the phone with music on it and I would show her pictures of her grandkids and she would have a big smile."

The recruitment process for the study started last summer. Canopy Growth held information sessions at several long-term care facilities in Ontario, and residents from nearby facilities also came by bus to get more information.

Greb tells the audience of curious and potential candidates about cannabidiol, the active ingredient in cannabis. He also brings up the story of an elderly woman who almost gave up playing the piano due to physical problems associated with aging.

"Unfortunately, she got osteoarthritis in her hands and she could no longer play piano. So she started using medical cannabis, and within about two months she was able to fully start playing again. And now she says 'I feel like a child again, I can play for hours on end.' I hear these stories over and over."

That pianist is Neva Carmen, 90. She is a resident at a long-term care facility in Paris, Ont.

"It's been a standing joke in my family. My grandson just thinks it's wonderful: 'I have to tell my friends my 90-year-old grandmother is taking marijuana,'" Carmen laughs. 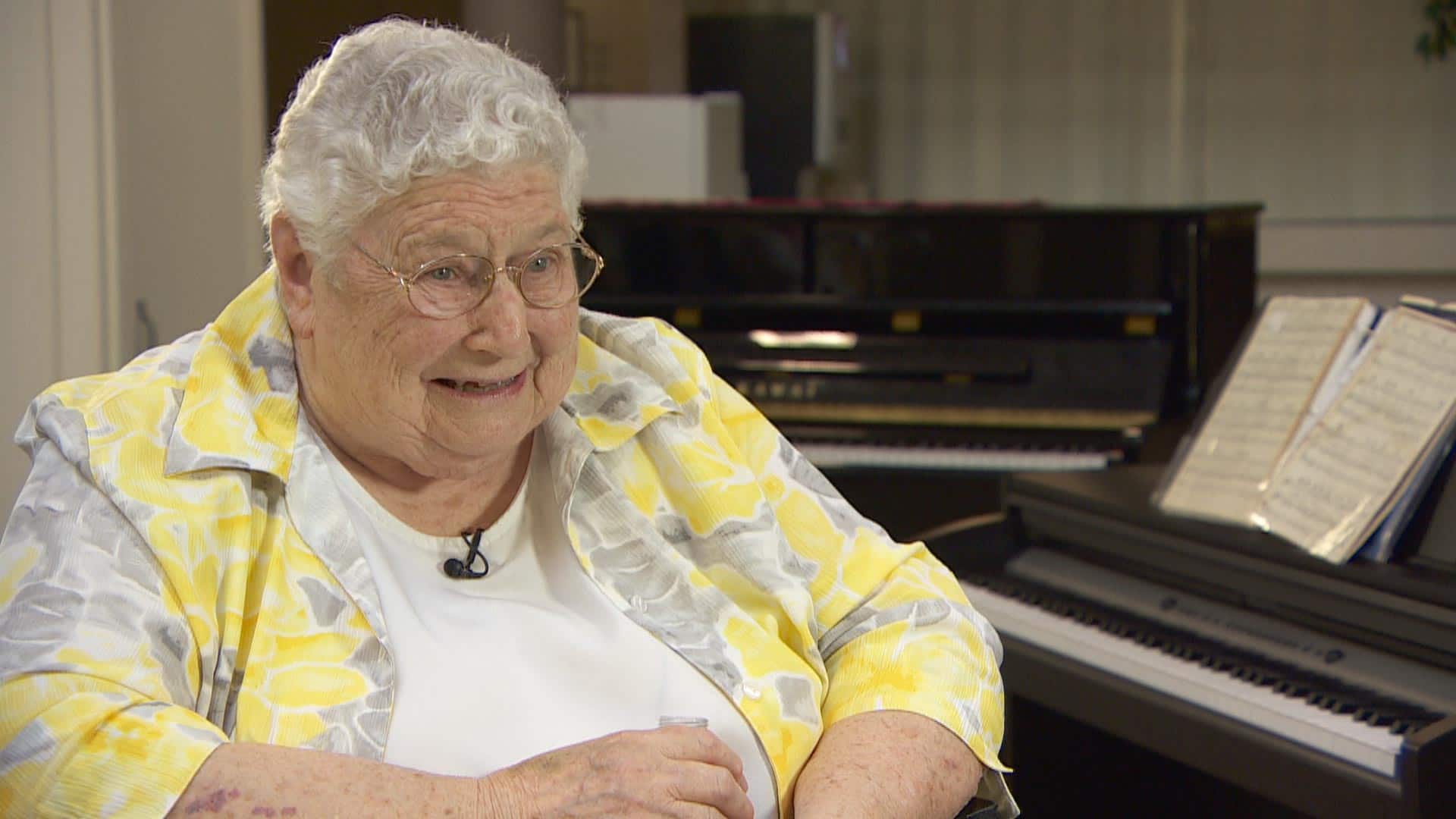 1 year ago
0:24
Neva Carmen, a 90-year-old grandmother who lives in Paris, Ont., talks about why she's taking part in a cannabidiol research program. 0:24

Carmen says she was angry and frustrated when she would sit at the piano and the pain from her arthritis would prevent her from playing.

Within six weeks on the cannabidiol treatment, she says she could feel a difference and her pain was subsiding. Now she plays regularly again for her fellow residents.

Carmen says she's much happier now that the swelling in her hands is down, and she can go back to doing what she loves.

However, not everyone has had success with the treatment.

Dr. Rhonda Collins works for Revera Homes, a network of seniors residences across Canada. She is helping identify people suitable for the trial, and making sure the residents and their families are well educated on the topic so that they can provide informed consent.

She says so far the results of the trial have been mixed.

"So that's why it's so important to me that rather than have a few scattered stories from across different sites, we have some rather robust evidence. Like any other drug that we use, any medication that we use — Tylenol, Ibuprofen, you name it — what works for you may not work for me."

Dr. Collins says she believes the study is exciting, knowing there is a possibility something could improve a resident's quality of life. But she notes that we still need good evidence about both the effects and how safe cannabidiol is.

Dr.  Mark Ware is the chief medical officer at Canopy Growth, and he is at the helm of this study, one of many involving medicinal cannabis. He says just like any other medicine, there are several considerations that seniors should keep in mind.

"They're often on other medications, and so the interaction between cannabinoid molecules and their existing medicines is a very important thing to consider. And we metabolize drugs differently, so the dosing may not be the same for an elderly person as it is for somebody who is in their 30s or 40s."

Ware says the goal of the study is to offer an improved quality of life, but also to gather data on the effects of cannabidiol on the range of factors that affect our aging population. Pain management, agitation with dementia, and ability to sleep are all being looked at.

"We know that cannabinoids, at different times during the day, work on some of those factors. So if we combine those things together, if we measure those outcomes, does it lead to an improvement in their overall quality of life?," says Ware.

The research will also set the groundwork for clinical trials to help establish best practices for using medical marijuana in the senior population.

As for Mike Walker, he ultimately just wants his wife, Karen, to feel better.

"If I can't fix her, at least give her a better quality of life. If she can relax … it's all you can hope for with this disease. If I can get that, then that's closer than what we had last month."

Watch The National's feature about the study of cannabidiol's effects on seniors: 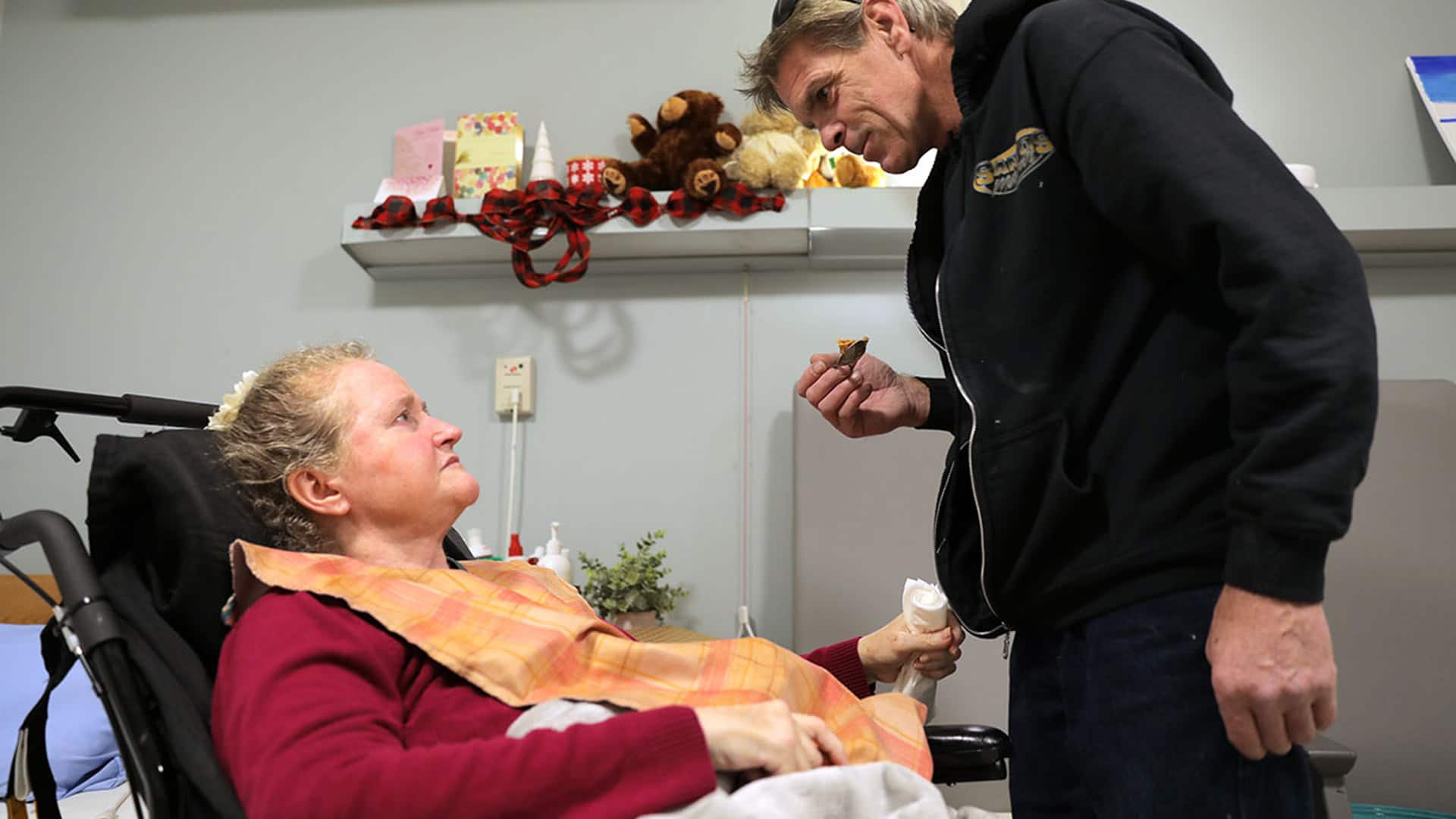 Seniors look to cannabis to ease ailments of aging

1 year ago
8:23
From swollen joints to dementia, seniors are increasingly looking to cannabis to treat the ailments of aging and a study is underway to better understand its effectiveness. 8:23