1,300 Canadians have died with medical assistance since legalization — here's one man's story

More than 1,300 people in Canada have chosen to end their lives since medically assisted dying became legal. Rob Rollins, a 56-year-old who lived in a rural village in eastern Ontario, was one of them.

'I just told him I loved him, held him,' man's husband tells CBC about medically assisted death

On Friday Jan. 6, Rob Rollins and his husband John MacTavish woke up just as they would any other morning. John got his brother Bobby MacTavish, who is unable to speak or walk, ready to go to his day program. But this time, before he left, Bobby spent about an hour with Rollins in his bedroom. The two were saying goodbye.

One of the couple's closest friends, Claire Cowley, soon arrived and sat in the living room with Rollins and MacTavish. The three were chatting "like it was any other morning," MacTavish says. "Which was weird, because I kept looking at the clock, knowing that, you know, the doctor was going to drive in that driveway."

Before the doctor arrived, Rollins, 56, wanted to make sure some practical things were in order.

"[He] tidied up his desk, made sure I knew where things were and gave me the passwords," MacTavish, 54, says. "You know, made sure that I knew how to run the dishwasher." 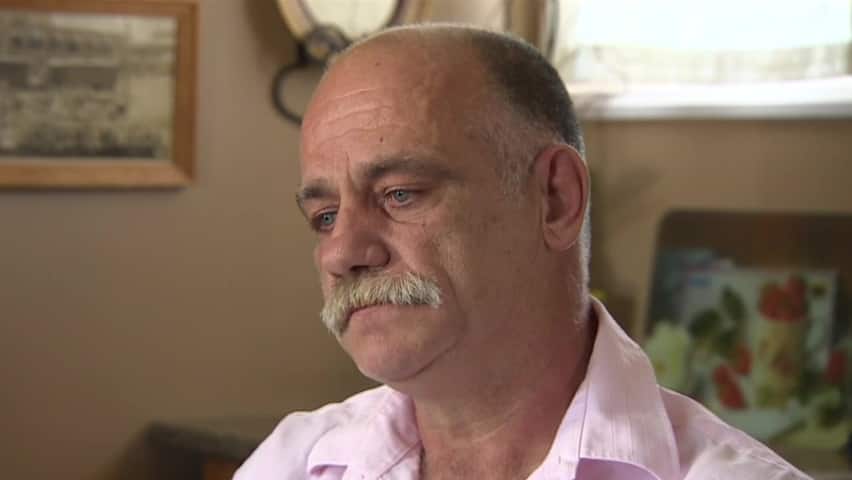 4 years ago
0:56
John MacTavish describes the morning his husband, Rob Rollins, died in their home with medical assistance after battling throat cancer 0:56

A nurse from their rural village of Delta, northeast of Kingston, Ont., who had cared for Rollins as he battled throat and neck cancer, arrived at about 10 a.m. and inserted an IV tube into his arm. His family doctor also came, although he wasn't required to, and the group kept chatting.

MacTavish says when the local doctor who would do the final procedure arrived at the house "he talked to Rob to make sure that Rob knew what was happening and still agreeable."

The couple walked down the hallway of their small house and Rollins had a cigarette, while MacTavish held his hand. Then, they came back to the living room.

"He said goodbye to Claire, who's his best friend, to the doctors and the nurse," MacTavish remembers. "We went into the bedroom, he got into bed.  I covered him up with his quilt.  I laid down beside him. The doctor came in and asked if there was anything we needed to say to each other."

Then, he administered the lethal dose of medication through Rollins's IV tube.

"I just told him I loved him, held him," MacTavish says through tears. "And it was over in about five minutes.  Very peaceful."

I have decided to do pain management and let nature take its course — with a bit of help.- Rob Rollins , in a letter to family and friends

Although CBC News has counted 1,324 medically assisted deaths in Canada through data requested from health ministries and coroners' offices in each province and territory, the actual number is likely higher, as some provinces were unable to provide up-to-date information.

Across the country, cancer was the number one underlying condition cited for medically assisted deaths, followed by neurological disorders, such as amyotrophic lateral sclerosis (ALS) and multiple sclerosis.

Because it was the first province to legalize medically assisted death, Quebec has numbers for a full year.

The night before he died, Rollins typed a letter for MacTavish to read to friends and family at his memorial, thanking them for their support during his illness and explaining his decision.

"I have decided to do pain management and let nature take its course — with a bit of help," Rollins wrote.

"We are fortunate enough to live in a province that allows medical assistance in dying. I've always been an advocate of this and now I have the privilege to attain it with deepest conversations and the support of my wonderful husband."

'We need to talk'

Rollins only made the decision to die after fighting for more than a year to live.

The discovery of a bump on Rollins's throat in July 2015 led to chemotherapy and many rounds of radiation, MacTavish says. At first, his health-care team thought things had gone well, but they later noticed the cancer had continued to grow. A year after diagnosis, they asked if Rollins would undergo a throat dissection to remove as many tumours as possible, and he agreed.

"He wanted to live, so he would do anything," MacTavish says.

But the surgery left Rollins unable to eat. He relied on a feeding tube in his abdomen, and found it hard to talk and to swallow. In October 2016, the doctors told him there was nothing more they could do, and gave him about six months to live.

Rollins decided he wanted to set the wheels in motion so he would have the option to end his life. In November 2016, they contacted the local palliative care agency, which connected them with a doctor in the area. The doctor came to their home and went through the assisted death process step-by-step.  The paperwork took a couple of weeks, MacTavish says, and it was clear that if and when the assisted death happened would be entirely up to Rollins.

Christmas was normally a big event in their home, and the couple usually took great joy in their tradition of hosting about 35 people. But last Christmas, they celebrated quietly, with Rollins enduring trip after trip to the hospital by ambulance as his pain worsened through the holidays.

"The next step in palliative care would have been sedation," MacTavish says. That means Rollins would have been kept either completely or mostly unconscious until death.

MacTavish was heartbroken, but not surprised, when he came home on Tuesday, Jan. 3, and checked on his husband in bed.

Legalizing medically assisted dying has sparked deeply passionate debate in Canada. Some of the fiercest opponents include the Canadian Conference of Catholic Bishops, which called the approval of C-14 "the utter failure of government, and indeed all society, to care truly, authentically and humanely for the suffering and vulnerable in our midst," as well as the Council of Canadians with Disabilities, and advocates concerned about elder abuse.

Normalizing medically assisted death, these advocates say, sends a message that the life of a person who is ill, disabled or elderly is not worth living. The government should instead be investing in improving the quality of their life, they argue, by investing in better supports for people with disabilities, as well as better palliative care.

"These are public policy decisions that end up sacrificing the lives of old, ill and disabled people." - Amy Hasbrouck , Not Dead Yet Canada

They also worry that people will feel they are a burden on their families and friends, and choose to end their lives because they feel obliged to.

"This is very personal for me," says Amy Hasbrouck, who is legally blind and speaks for Not Dead Yet Canada. "These are public policy decisions that end up sacrificing the lives of old, ill and disabled people."

Jonathan Reggler, a family doctor in Comox, B.C., who performs medically assisted deaths and is chair of Dying with Dignity's Physician Advisory Council, says he understands those concerns. But he says rigorous safeguards are in place to protect the vulnerable — including a requirement that two separate doctors or nurse practitioners must be involved in approving the death.

"We are actually very, very careful to make sure that when we talk to the patients that we speak with them in such a way that we can work out and ask them directly whether or not  there is any pressure on them," Reggler says. "Most providers would have that part of the discussion with the patient alone, and not with family members present."

Reggler and others in favour of medically assisted dying believe the Canadian legislation is too restrictive due to a requirement that death be "reasonably foreseeable."  Data gathered by CBC suggests in some provinces, many requests have been denied. Reggler estimates that about 30 per cent of the patients he personally assesses are ineligible, mainly because "the patient's natural death is not reasonably foreseeable or they have lost capacity by the time I see them."

As a full-time caregiver for his brother, who has a brain disorder and cerebral palsy, John MacTavish adamantly rejects the notion that the availability of medically assisted dying devalues the lives of people with disabilities.

"I fight every day to make sure that he gets everything that he should have in this life," he says. "My brother has a great life.  He's on the go Monday to Thursday. He's spoiled rotten. He has everything he wants."

Three months after Rob Rollins died, MacTavish says he has no regrets about his role in his husband's death.

But he takes comfort in the relief — even happiness — Rollins had in his last three days, "because he had control" over how he would die.