Grapefruit juice interaction with drugs can be deadly

More prescription drugs are on the market that can interact with grapefruit juice with potentially serious effects such as sudden death, Canadian doctors warn. 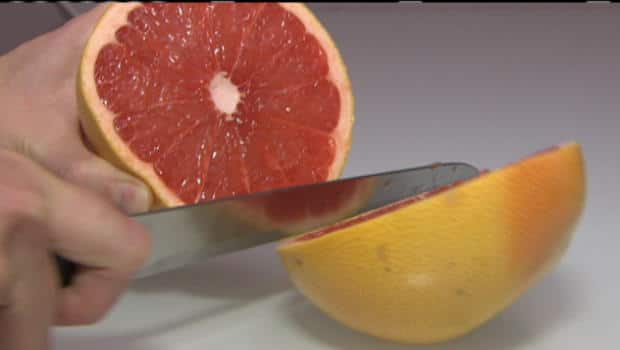 8 years ago
2:27
More prescription drugs have been found to interact with grapefruit, CBC's Kelly Crowe reports 2:27

More prescription drugs are on the market that can interact with grapefruit juice with potentially serious effects including sudden death, Canadian doctors warn.

David Bailey, a clinical pharmacologist at the Lawson Health Research Institute in London, Ont., discovered the interaction between grapefruit and certain medications more than 20 years ago. Since then, he said, the number of drugs with the potential to interact has jumped to more than 85.

Grapefruit juice is known to interact with some types of medications, leading to an overdose hazard.

Bailey reviews new product monographs and prescribing information for the Canadian Pharmacists Association, and keeps a close eye on those with the potential to produce serious adverse reactions.

"What I've noticed over the last four years is really quite a disturbing trend, and that is the increase in the number of drugs that can produce not only adverse reactions but extraordinarily serious adverse drug reactions," Bailey said. "Between 2008 and 2012, the number of drugs in the list has gone from 17 to now 44."

Many of the drugs are common, such as some cholesterol-lowering statins, antibiotics and calcium channel blockers used to treat high blood pressure. Others include agents used to fight cancer or suppress the immune system in people who have received an organ transplant.

People older than 45 buy the most grapefruit and take the most prescription drugs, making this group the most likely to face interactions, researchers said in an article published in Monday's issue of the Canadian Medical Association Journal, titled "Grapefruit-medication interactions: forbidden fruit or avoidable consequences?"

Older adults also tend to be less able to compensate when faced with excessive concentrations of drugs compared with young and middle-aged people — another reason that those over 45 seem to be particularly vulnerable, they added.

"Taking one tablet with a glass of grapefruit juice is like taking 20 tablets with a glass of water," Bailey said. "This is unintentional overdosing. So it's not surprising that these levels go from what we call therapeutic to toxic."

Of the 85 known drugs that interact with grapefruit, 43 can have serious side-effects, including sudden death, acute kidney failure, respiratory failure, gastrointestinal bleeding and bone marrow suppression in people with weakened immune systems.

The authors noted that all sources of grapefruit — the whole fruit or 200 mL of grapefruit juice — and other citrus fruit such as Seville oranges (often used in marmalade), limes and pomelos can lead to drug interactions.

Why drug labels say 'Do not take with grapefruit juice'

Researchers advised that the affected drugs should not be consumed with those fruits. They also suggested noninteracting alternatives that could be prescribed.

But the authors can't say how big a problem the interactions are because of a lack of awareness. Health-care professionals might not be aware of the possibility to check into it and patients may not volunteer the information, Bailey said.

The researchers want to get the word out that the interaction can occur even if someone eats grapefruit or drinks the juice hours before taking a drug, such as downing the drink at breakfast and taking the medication after dinner.

Previously published reports showed that drinking a 200-mL glass of grapefruit juice once a day for three days produced a 330 per cent increase in the concentration of simvastatin, a commonly used statin, in the bloodstream compared with taking the medication with water.

The paper's authors said that the interaction doesn't apply to classes of drugs but to particular medications with three key characteristics:

Patients can look for the criteria in the product monograph or prescribing information for a drug under "clinical pharmacology."

In theory, the batch, storage conditions and white versus pink type of grapefruit might influence the size of the interaction but the researchers said that hasn't been studied in detail.

A search of Health Canada's adverse drug reaction database listed 30 reactions under "grapefruit" between Jan. 1, 1992, and June 30, 2012. The department cautioned that the data was voluntarily reported and should not be used to determine the incidence because the total number of reactions and patients exposed is unknown and other factors could be contributing.

Selected drugs that interact with grapefruit

With files from CBC's David MacIntosh