Living within half a city block of a major road may be associated with a small increased risk of dementia, suggests a new Canadian study that could help shed light on factors contributing to the brain disorder.

Air pollutants could be a factor, but hypothesis remains unproven

Living within half a city block of a major road may be associated with a small increased risk of dementia, suggests a new Canadian study that could help shed light on factors contributing to the brain disorder.

To learn more, researchers at Public Health Ontario and the Institute for Clinical Evaluative Sciences examined records of more than 6.5 million people in the province aged 20 to 85 to look for associations between living near major roads and the incidence of dementia, Parkinson's disease and multiple sclerosis.

In Wednesday's issue of The Lancet, Dr. Ray Copes and his team said they had found that living close to heavy traffic was associated with a higher incidence of dementia, but not Parkinson's or multiple sclerosis (MS).

The study can't prove cause and effect.

Fine particles from vehicle pollution can be absorbed into the lungs and are associated with inflammation linked to the onset of cardiac and respiratory diseases, Copes noted. It's plausible that air pollutants could also affect the central nervous system and cause dementia, but that hypothesis hasn't been proven.

"Our study suggests that there is a link between exposure to traffic pollution and risk of dementia," Copes said in an interview. "Obviously other factors are important as well, but there's likely a role for traffic pollution as one of the factors in developing dementia."

For those living within 50 metres of Ontario's 400 series highways or other major arterial roads in cities, the dementia risk increased by seven per cent, which Copes called modest but significant, given how common the disease is.

There was no increased risk for those living farther than 300 metres away.

Overall in Ontario, about 19 per cent of people live within 50 metres of a major road.

"I think this is another piece of evidence that would argue that steps to reduce traffic-related pollution may have some important public health benefits," Copes said.

The underlying prevalence of dementia among 65- to 74-year-olds is two to three per cent, Copes said. For those aged 75 and older, the prevalence rises to 10 to 12 per cent.

Dementia usually affects memory, and by definition is a decline in mental ability severe enough to interfere with a person's ability to perform daily activities.

The findings are interesting, said Dr. Samir Sinha, director of geriatrics at Sinai Health System and Toronto's University Health System. He was not involved in the study.

"It wasn't an overwhelmingly strong association," Sinha said. "But it helps to give more information that may help us understand a little bit more about what causes dementia in certain cases."

"Now what we may be seeing is the fact that still having some exposure to highway pollutants, for example, may still be leading to this type of dementia," Sinha said. "This is all very speculative. More research needs to be done to try to understand what this association means and how that may inform better environmental practices."

Copes said the findings are worth considering for anyone choosing a place to live. More broadly, the findings could influence building design and location from high-traffic areas, as well as encourage stricter vehicle emission standards.

The study was funded by Health Canada. 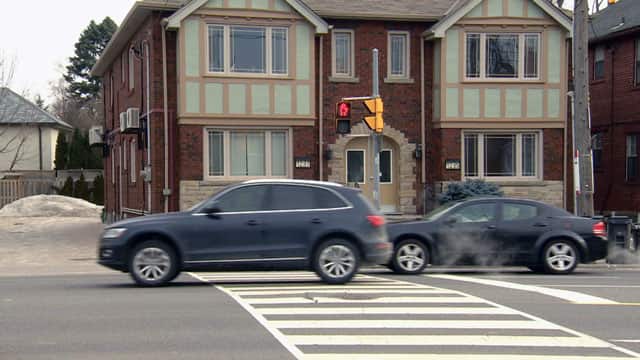 4 years ago
2:11
A study in the Lancet by Ontario researchers points to a link between dementia and living close to major roadways 2:11