Delirium is an under-reported condition that affects up to 200,000 Canadians per year, but more and more hospitals are developing ways to identify its symptoms and prevent it from taking hold of a patient.

Robert Van Herpt was 53 when he decided to overhaul his life. A heavy drinker and smoker, he quit both at once cold turkey. He started a new antidepressant. It was, in many ways, a new beginning.

But it didn't go according to plan. Before long, Van Herpt stopped sleeping. And that's when he started seeing things.

"I'd be sitting and here's a swarm," he said. "I honestly put my arm out and said I could feel them up against my arm. It was that true."

Then in the nighttime, from his upstairs bedroom window, in Kingston, Ont., he thought he could see someone damaging his wife's car. He also thought people were partying downstairs in his home.

"He was definitely seeing things that weren't there," said his wife, Joanne. "The hallucinations were very drastic in the evening. Really vivid hallucinations."

At one point, while Joanne was talking to one of the attending doctors, Robert thought he saw another doctor spitting on him.

Eventually, the Van Herpts learned that Robert was in the throes of delirium tremens, a condition that can be caused by abruptly stopping a long period of drinking.

"Basically when you quit cold turkey, the brain goes through a chemical reaction," Joanne was told.

Robert was admitted to the intensive care unit, where he spent two weeks — half of it in an induced coma to stop the delirium.

A year later, he is still experiencing memory loss.

Delirium is not dementia. It comes on quickly, ends just as fast and symptoms fluctuate during the day. Hippocrates called it "brain fever."

Hospitals are one of the biggest culprits. They're noisy, busy and not conducive to getting a good night's sleep. It all lowers the threshold for becoming delirious.

In Canada, there are 250,000 ICU admissions every year.  The incidence of delirium in ICU patients varies widely from 30 to 80 percent.  But Kingston neurologist Dr. Gordon Boyd errs on the higher side.

"As I think that delirium is generally under recognized, it is fair to say that at any given time, up to 80 per cent of ICU patients are experiencing delirium,"

Doctors say it's often underdiagnosed and under-reported, a serious and expensive burden on the public health-care system — especially when older patients who are admitted more often use more hospital resources and stay longer.

And it can be deadly, rapidly deteriorating a patient's physical and mental health. Studies have shown that elderly patients in hospitals with delirium are at increased risk of dying down the road.

"When you're delirious, you're often very sick. Persons who are very sick can die if they have heart failure, pneumonia or end-stage lymphoma and that delirium may be sufficient to end that person's life, not so much the delirium, but the underlying causes of delirium," says Dr. Brian Misiaszek, chief of geriatric services at Hamilton Health Sciences Centre

"If you have delirium in hospital and you recover from it, you may be vulnerable for dying in the next year."

While delirium is a big problem, it's not a "sexy" one, so it's not well-studied. But a smattering of well-designed initiatives have found solutions that can ward off delirium.

Doctors at Hamilton Health Sciences Centre are taking a proactive approach to help prevent delirium before it has a chance to take hold of a patient.

"It's a dreaded scourge in hospitals and we're now realizing that a lot of the problems we're facing in hospitals can be improved just by preventing delirium," said Misiaszek.

The prevention program is borrowed from the U.S. and called Hospital Elder Life Program, or HELP for short.

Misiaszek says it's "mom-and-apple-pie stuff," things like making sure the patient's eyeglasses are clean, their hearing aids are in place and they are drinking enough water.

And keeping patients like Hildegard Pietsch alert, aware and active.

The 87-year-old is recovering from a fall she had in her home. While she's here, Patricia Gilfillan checks in on her.

The trained volunteer engages Pietsch in a conversation, keeping her stimulated by talking about the day's weather, making sure Pietsch has her favourite music on hand, quizzing her about the time of month, getting the elderly patient stretching, even if it's from her bed.

So far, said Misiaszek, the program has helped reduce delirium at the hospital by 30 per cent, which is reassuring for Pietsch.

"I'm here to get well," she tells Gilfillan.

The program includes simple tasks, but its impact is felt even after the patient has been discharged.

"You can make a difference that allows a person not to just get out of hospital a little faster, but come out a little bit more functional," said Misiaszek.

For the last 50 years, says Dr. Yoanna Skrobik, people who had delirium were given antipsychotic drugs, medication primarily used to manage psychosis. Psychosis is a mental disorder that includes symptoms like delusions and hallucinations.

"There's never been good proof that antipsychotic drugs work for delirium," she said. "But they also show significant side-effects. So we're probably harming people if we give them antipsychotics."

Skrobik, an internal medicine specialist and clinician scientist at McGill University in Montreal, has devoted much of her research into delirium for the past 20 years.

"I was interested in the topic of delirium because I've always liked underdog topics," she said. "People shy away from people who are inappropriate or agitated."

In her latest study, Skrobik explored other pharmacological alternatives for delirium and found that the use of a sedative called dexmedetomidine could prevent delirium in critically injured patients.

"This paper is the first paper that shows there is a medication we can give, as a slow infusion overnight, of an anxiety diminishing but not sedating drug," she said.

Looking back at the research into the causes and prevention of delirium, Skrobik said scientists have come a long way.

"When I started doing work in this area, nobody talked about ICU delirium," she said. "My colleagues would roll their eyes."

But she admits more work is also needed in areas that go beyond medication.

"I think we have a long way to go on the humanizing front."

A year after Van Herpt's delirium episode, he returned to Kingston General Hospital to take part in a unique follow-up clinic.

"In one minute, I want you to tell me how many words that you can think of that begin with the letter F," Dr. Gordon Boyd said to him.. 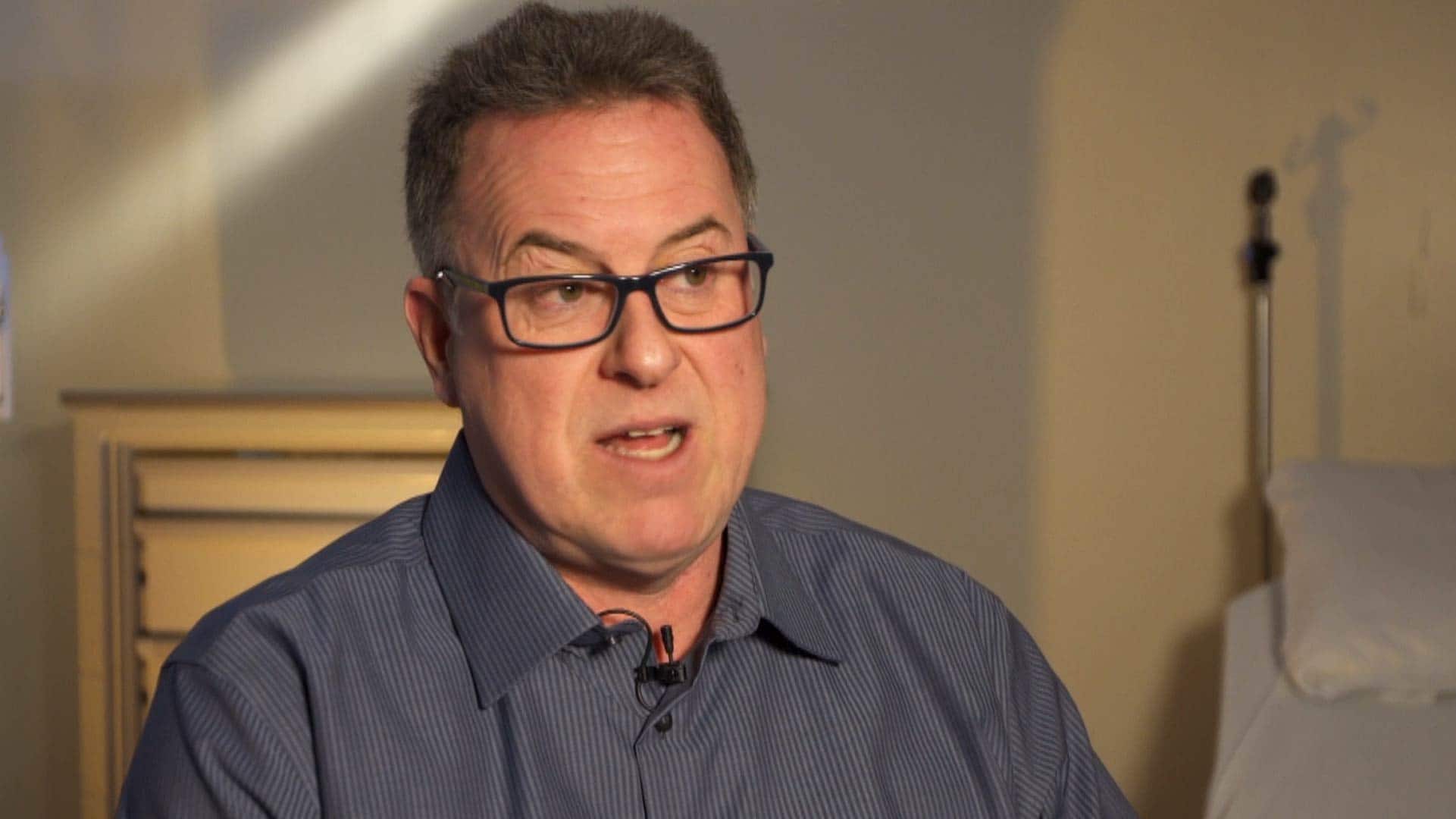 3 years ago
0:30
Delirium is caused by a brain malfunction, triggering frightening hallucinations in patients. Delirium can affect up to 200,000 ICU patients every year 0:30

Boyd started the clinic last year as a way of tracking those who had delirium.

"We did this because we realized over the past decade that even though we're really good at saving people's lives in the ICU, the people who survive ICU these days are really not as well as they could be."

Boyd and his team review the patients' stays in hospital, what brought them there in the first place and what happened during their time there. Former patients are also screened for anxiety, depression and cognitive impairment.

A unique aspect of the clinic has former patients like Van Herpt return to the intensive care room.

"There's some component of healing and I think especially for people who might have bizarre or distorted memories about what their ICU was all about." said Boyd. "It can provide some anchoring to help get over these bad memories."

Van Herpt says he found the visit therapeutic, even though for a while last year, it was the place where his life stopped making sense.

"You don't want to wish it upon anybody," Van Herpt said following his visit.

Kas Roussy is a senior reporter with the Health unit at CBC News. In her more than 30 years with CBC, Kas’s reporting has taken her around the globe to cover news in countries including Pakistan and Afghanistan, Chile, Haiti and China, where she was the bureau producer.