The recommended quarantine time for close contacts of a positive COVID-19 case is being reduced by up to a week in the United States, but while some of Canada's health experts say a similar approach could be useful here, others aren't so sure.

Cutting 14-day time in half would be beneficial, infectious disease specialist says

The recommended quarantine time for close contacts of a positive COVID-19 case is being reduced by up to a week in the United States, but while some of Canada's health experts say a similar approach could be useful here, others aren't so sure.

The U.S.-based Centers for Disease Control and Prevention (CDC) announced Wednesday it had shortened the recommended length of quarantine after exposure from 14 days to 10 — or seven days with a negative test result.

Health Canada was still recommending a 14-day quarantine period as of Wednesday, but Dr. Zain Chagla, an infectious disease specialist at McMaster University in Hamilton, says cutting that time in half would be beneficial.

"It would be super important for the sake of incentivizing people to actually quarantine after exposure," he said.

"And there's a lot of different things that could theoretically open up — getting health-care workers back to work, getting kids back to school — a lot of ways where this could ease the burden of potential exposure in society."

The CDC had previously said the incubation period for the coronavirus that causes COVID-19 could extend to 14 days, but the organization now says most people become infectious and develop symptoms between four and five days after exposure.

Chagla says the 14-day window was likely inspired from SARS data, where the incubation period was longer.

While isolation and quarantine are sometimes used interchangeably, Chagla says there's a difference in the terms. Isolation is for those who have tested positive, while quarantine is for people who may or may not actually have the virus, like close contacts of positive cases or those travelling into Canada. Isolation recommendations for positive cases vary, but are typically 10 days after symptom onset.

Ashleigh Tuite, an epidemiologist at the University of Toronto, says a change in quarantine guidance reflects our evolving understanding of COVID-19.

"If you're exposed, it takes a couple days for you to become infectious, so [seven to 10 days] should be enough to tell whether you've got the virus," Tuite said. "But of course, that's assuming your experience is reflective of the typical course of infection."

The key to the CDC's new guidance for Tuite is having the option to end quarantine at seven days with a negative test result. She suspects that's in place to stop people who have the virus but no symptoms from ending the quarantine period too early.

A positive test at Day 7 would mean that person should continue to isolate, Tuite said, while a negative result would mean they could safely end quarantine, knowing enough time has passed since exposure to confidently assume they won't still get sick.

Dr. Don Sheppard, the founder and director of the McGill Interdisciplinary Initiative in Infection and Immunity (MI4), says the CDC's plan makes sense scientifically, but there would be logistical issues in testing every COVID contact in Canada who wanted to end their quarantine at Day 7.

"It's impossible to do that," he said. "It's either 14 days of proper isolation, or it's seven days with a negative test, and right now our system cannot offer seven days plus testing to the public at large."

Why one expert says Canada should look at shortening quarantine period: 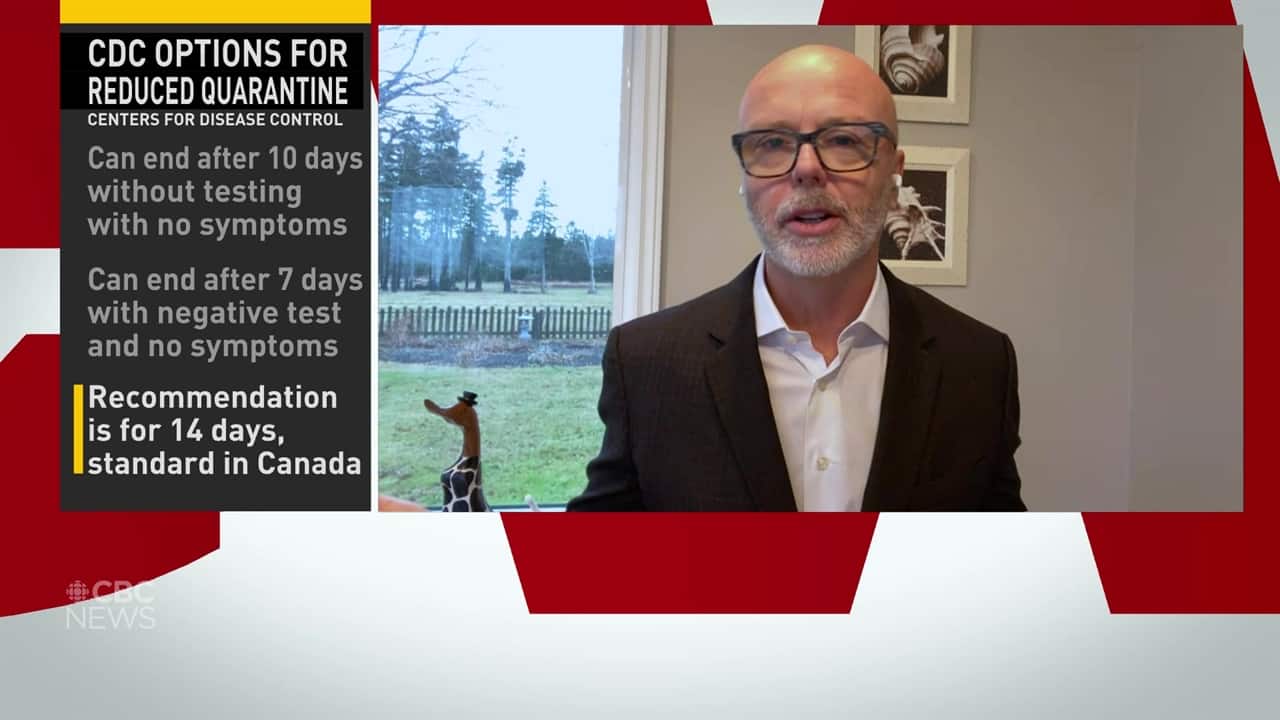 2 months agoVideo
1:04
Health Canada is still recommending a 14-day quarantine period for people who may have been exposed to COVID-19. But according to infection control and disease specialist Dr. Michael Gardam, that duration could be lowered given what has been learned about the disease since the pandemic began.  1:04

Testing capacity does exist in certain situations, Sheppard said, like for health-care workers and other front-line staff that need a quicker quarantine to get back to work. He cautioned, however, that taking a test on Day 7 still means isolating for an extra day or two while awaiting results.

Quarantine also needs to be done solo in order to work, Sheppard added, warning that the CDC guidance isn't meant as a loophole for holiday gatherings if your family isolates together for seven days before an event.

Supports for people to quarantine

He used an example of military recruits in the U.S. who were told to quarantine for 14 days before reporting to camp. A handful of positive tests (0.9 per cent) were caught upon arrival, suggesting true quarantine hadn't been followed.

Those recruits were sent home while the rest underwent another group quarantine. When tested again two weeks later, the positivity rate had grown to 1.3 per cent.

"Why? Because there were people incubating and they turned positive. And those people infected others in their groups," Sheppard said.

"So if you don't do strict, single-person isolation, you don't actually break the cycle of transmission, you just pass it around in your group."

Tuite says that further illustrates the usefulness of a shortened quarantine period.

A mother with young children, or someone who shares a small apartment with another person will find it harder to properly quarantine for longer periods, she said, as will someone who can't afford to take a full two weeks off work.

"It really comes down to having the means to do it," she said. "Can you survive for two weeks if you're not getting income? Can you isolate in a household with multiple people?

"We need to have support in place so that people can quarantine, and that doesn't change whether it's for a week or 14 days. But it becomes much more challenging when it's for longer periods."