China's leader has called the accelerating spread of the coronavirus a grave situation, as cities from the outbreak's epicentre in central China to Hong Kong scrambled to contain the illness.

The death toll from the coronavirus in China has risen to 56 with 1,975 total cases reported.

The figures reported Sunday morning cover the previous 24 hours and mark an increase of 15 deaths and 688 cases.

In Canada, health officials in Ontario on Saturday confirmed its first "presumptive" case of coronavirus in Toronto.

The U.S. Consulate in Wuhan will evacuate its personnel and some private citizens aboard a charter flight Tuesday. A notice from the embassy in Beijing on Sunday said there would be limited capacity to transport U.S. citizens on the flight that will proceed directly to San Francisco.

It said that in the event there are not enough seats, priority will be given to individuals "at greater risk from coronavirus."

President Xi Jinping on Saturday called the spreading illness a grave situation in remarks reported by state broadcaster CCTV. He spoke at a meeting of Communist Party leaders convened on Lunar New Year — the country's biggest holiday whose celebrations have been muted — and underlined the government's urgent, expanding efforts to control the outbreak 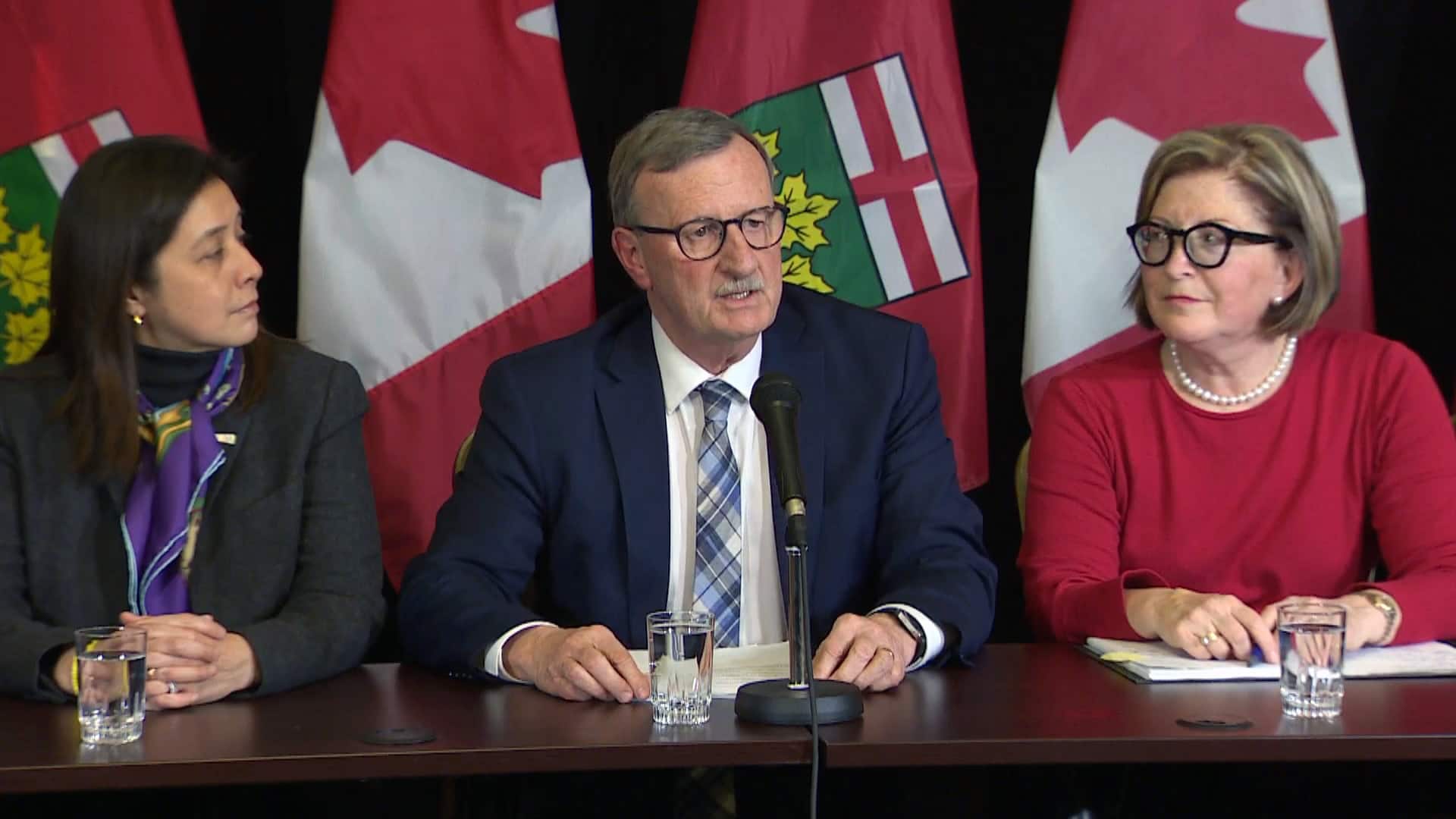 12 months agoVideo
2:24
Public health officials confirm the first "presumptive" case of the coronavirus in Toronto, but say the risk to Ontarians is still low. 2:24

Millions of people travelling during the holiday have fuelled the spread of the outbreak nationwide and overseas after it began in the city of Wuhan in central China. The vast majority of the infections and all the deaths have been in mainland China, but fresh cases are popping up.

Singapore reported its fourth case on Sunday, a 36-year-old man from Wuhan. The Health Ministry said he did not exhibit any symptoms on his flight. He developed a cough the next day, sought treatment on Jan. 24 and was immediately isolated.

In the heart of the outbreak where 11 million residents are already on lockdown, Wuhan banned most vehicle use, including private cars, in downtown areas starting Sunday, state media reported. Only authorized vehicles would be permitted, the reports said.

The city will assign 6,000 taxis to neighbourhoods, under the management of resident committees, to help people get around if they need to, China Daily said.

In Hong Kong, leader Carrie Lam said her government will raise its response level to emergency, the highest one, and close primary and secondary schools for two more weeks on top of next week's Lunar New Year holiday. They will reopen Feb. 17.

Lam said direct flights and trains from Wuhan would be blocked.

In a sign of the growing strain on Wuhan's health-care system, the official Xinhua News Agency reported that the city planned to build a second makeshift hospital with about 1,000 beds. The city has said another hospital was expected to be completed Feb. 3.

The new virus comes from a large family of what are known as coronaviruses, some causing nothing worse than a cold. It causes cold- and flu-like symptoms, including cough and fever, and in more severe cases, shortness of breath. It can worsen to pneumonia, which can be fatal.

China cut off trains, planes and other links to Wuhan on Wednesday, as well as public transportation within the city, and has steadily expanded a lockdown to 16 surrounding cities with a combined population of more than 50 million — greater than that of New York, London, Paris and Moscow combined.

Temples locked their doors, Beijing's Forbidden City and Shanghai Disneyland closed, and people cancelled restaurant reservations ahead of the holiday, normally a time of family reunions, sightseeing trips and other festivities in the country of 1.4 billion people.

"We originally planned to go back to my wife's hometown and bought train tickets to depart this afternoon," said Li Mengbin, who was on a stroll near the closed Forbidden City. "We ended up cancelling. But I'm still happy to celebrate the new year in Beijing, which I hadn't for several years."

Temples and parks were decorated with red streamers, paper lanterns and booths, but some places started dismantling the decor.

People in China wore medical masks to public places like grocery stores, where workers dispensed hand sanitizer to customers. Some parts of the country had checkpoints for temperature readings and made masks mandatory.

French automaker PSA Group said it will evacuate its employees from Wuhan, quarantine them and then bring them to France. The Foreign Ministry said it was working on "eventual options" to evacuate French citizens from Wuhan "who want to leave." It didn't elaborate.

The National Health Commission said it is bringing in medical teams to help handle the outbreak, a day after videos circulating online showed throngs of frantic people in masks lined up for examinations and complaints that family members had been turned away at hospitals that were at capacity.

The Chinese military dispatched 450 medical staff, some with experience in past outbreaks, including SARS and Ebola, who arrived in Wuhan late Friday to help treat many patients hospitalized with viral pneumonia, Xinhua reported.

Xinhua also said medical supplies are being rushed to the city, including 14,000 protective suits, 110,000 pairs of gloves and masks and goggles.

The rapid increase in reported deaths and illnesses does not necessarily mean the crisis is getting worse but could reflect better monitoring and reporting of the virus.

It is not clear how lethal the new coronavirus is or even whether it is as dangerous as the ordinary flu, which kills tens of thousands of people every year in the U.S. alone.