'It's outrageous': Costly cancer drugs thrown out because of one-size-fits-all packaging

The health-care system is throwing out millions of dollars' worth of costly cancer drugs every year because of how they're packaged by drugmakers, ​​​say experts.

Prescription drug negotiations steeped in secrecy, leaving taxpayers in the dark on costs

The health-care system is wasting millions of dollars by buying cancer medications that are thrown out because of the way they are packaged by drug makers — in one-size-fits-all vials that hold too much for most patients, a study found.

"It's outrageous," said drug policy researcher Alan Cassels, who is familiar with the study.

"We have so many demands on our health-care dollars for drugs and doctors and hospitals and so on. So, to see this kind of waste is appalling."

The waste costs as much as $102 million over a three-year period, according to the study published two years ago in the medical journal Cancer.

"What people don't realize is that wastage is actually a real cost that's borne by the provinces or hospitals [and] ultimately the taxpayers," said Dr. Matthew Cheung, a senior co-author of the study and a hematologist at Sunnybrook Health Sciences Centre in Toronto.

The drugs are administered in very specific doses based on a patient's weight and/or height, then, because of concerns about possible infection from reusing the same vial, nurses discard the rest.

Some hospitals have been trying to reduce waste by sharing vials, but can only do that with patients who need the same drug on the same day, since many of these medications have a short shelf life once opened.

The study looked at 12 high-priced injectable cancer drugs and found that the amount being wasted per vial ranged from zero to 87.5 per cent.

"We realized that drug wastage is actually a huge component of what we're paying. And again, when we're wasting drugs, we're increasing costs without getting any extra benefit," said Cheung.

In the U.K., the government told drug companies in 2016 they must produce some cancer medications in packaging that reduces waste if they wanted to be considered in the bidding process for which drugs it will purchase.

Drugmakers will 'scream and complain'

Cassels — who is part of the Therapeutics Initiative, an independent drug analysis group based in the University of British Columbia's Faculty of Medicine — says the same hard-nosed negotiations done in the U.K. need to happen here.

He says the group that negotiates prescription drug prices here — the Pan-Canadian Pharmaceutical Alliance (PCPA), of which all the provinces are members — needs to pressure drugmakers to produce smaller vials and give refunds for what's not used.

Cassels says he expects the drug companies will "lobby and scream and complain," over anything that adds to the cost of production.

"But at the same time, the public agencies have a monopoly in terms of paying for these drugs and they should be able to go to the mat in terms of negotiating the best prices and negotiating refunds if necessary," he said.

"The biggest problem with drug prices is sometimes we don't even know what the drug prices are … so we don't really know what we're paying for. When you think about other things that we use public money for, like building bridges or roads, those costs are known down to the penny. Whereas in the drug world, oftentimes, the drug costs are completely hidden."

Asked if vial sizes and refunds for unused portions are part of the price negotiations, PCPA tells Go Public those talks are "confidential at the request of the manufacturer."

The confidentiality includes pricing information, budget impact estimates, "and other sensitive information is held in confidence and is not disclosed, except in accordance with applicable law or with the consent of the parties," the alliance said.

The provincial agencies that comprise PCPA are, mostly, equally secretive — except for B.C., where the Provincial Health Services Authority tells Go Public it typically does ask drugmakers to offer smaller vials.

But, it points out, the vial sizes are set when the drugs are submitted to Health Canada for marketing approval — and making a change is a long process. Health Canada didn't respond to questions about that.

When Deb Hebert, who is battling non-Hodgkin's lymphoma, went to get her stem cell-stimulating drug plerixafor injected by the oncology nurse last month, she realized her dose only required about three-quarters of what was in the vial.

"I asked her what was going to happen with the rest of the medication. She told me that it would be discarded," said Hebert, who has been on sick leave since August from her job as a finance administrator at CBC in Calgary while she battles the disease for the third time.

The same thing happened with Hebert's second dose the next day. Each injection used about 75 per cent of a vial. At $7,893 per vial, that works out to a waste of about $3,900 between the two doses.

Sanofi, the company that makes Hebert's medication, says it sells the drug in that vial size because it's a "typical dose for the majority of the patient population," and, it says, to account for any spillage while the drug is being administered.

The company adds, the drug is "preservative-free and therefore does not support multi-dose usage." 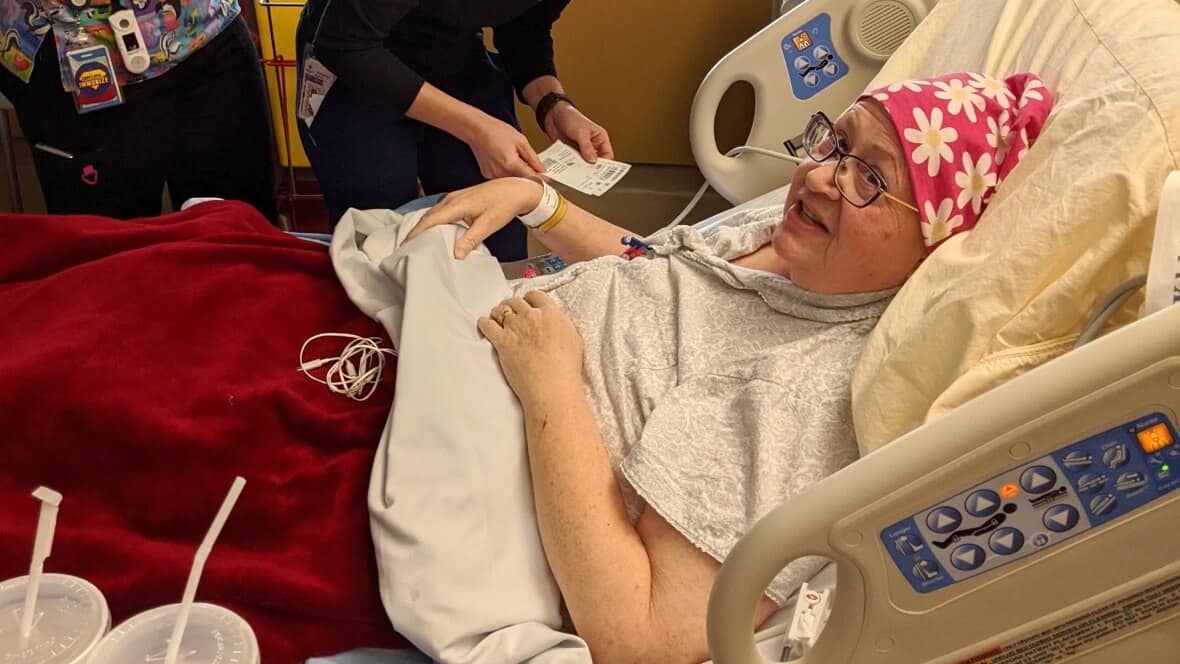 With files from Jenn Blair