Breast cancer risks on the job a 'neglected area'

Some women working in industries such as automotive plastics and food canning may face a higher risk of breast cancer than those in other occupations, say Canadian researchers who are trying to fill gaps in what they call a neglected field. 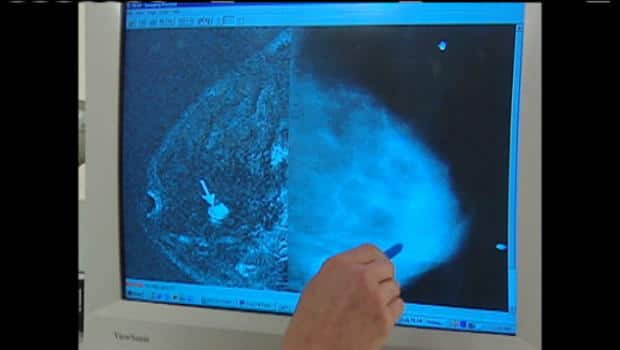 8 years ago
3:13
Some women working in industries such as automotive plastics and food canning may face a higher risk of breast cancer than those in other occupations, say Canadian researchers 3:13

Some women working in industries such as automotive plastics and food canning may face higher risk of breast cancer than those in other occupations, say Canadian researchers who are trying to fill gaps in what they call a neglected field.

Investigators in Windsor, Ont., compared 1,006 women diagnosed with breast cancer to 1,147 women of the same age without the disease in southwestern Ontario. They used interviews to investigate their occupational histories.

The researchers concluded that premenopausal breast cancer risk was doubled in the automotive plastic manufacturing and food canning industries, but experts questioned the credibility of deducing such as large effect from a small population.

The "exploratory" study "contributes to one of the neglected areas: occupational risk factors for breast cancers," Jim Brophy of the department of sociology, anthropology, and criminology at the University of Windsor and his co-authors conclude in Monday’s issue of the journal Environmental Health.

"The identification of several important associations in this mixed industrial and agricultural population highlights the importance of occupational studies in identifying and quantifying environmental risk factors and illustrates the value of taking detailed occupational histories of cancer patients."

Women working in the automotive plastics industry described an injection moulding process that involves taking molten mixtures that exposed them to vapours and mists from plasticizers, pigments and flame retardants. These included compounds that have been identified as carcinogenic.

When the U.S. Institute of Medicine reviewed causes of breast cancer last year, it concluded  the most consistent evidence of a link with increased breast cancer risk were from ionizing radiation, combination estrogen-progestin hormone therapy, and greater postmenopausal weight.

In 2011, British researchers estimated the level of breast cancer in the U.K. female population that can be attributed to established risk factors.

"But for many other factors, the evidence from human studies is more limited, contradictory, or absent," the U.S. researchers said.

For other factors, they said the evidence suggests a possible association, meaning no cause-and-effect relationship can be drawn. Exposure to secondhand smoke, nighttime shift work and exposure to chemicals such as benzene in some workplaces, were included in that category.

Paul Demers, head of the Occupational Cancer Research Centre in Toronto, has worked on trying to determine which Canadian industries have the highest exposure to carcinogens in the workplace.

A more reliable model takes a population and watches what happens over time.

Demers called for more investigation "to see whether those [associations] are real or not."

Brophy's study could not identify exactly which chemicals the women were exposed to because many of the plants have since closed and records were not kept.

Not knowing the amount of exposure is one of the main limitations of the research, said Martin Yaffe, a senior scientist in imaging research at the Sunnybrook Research Institute, where he focuses on detecting breast cancer.

"Nevertheless, this work provides evidence for what may be an important cause of breast cancer — environmental exposure in the workplace," Yaffe said in email.

"In this case it may be possible, by knowing the carcinogenic potential of certain chemicals, to limit exposure to them by using alternative materials or by implementing appropriate safety measures, and in that way reduce the incidence of some types of breast cancers."

Dr. Steven Narod, a Canada Research Chair in breast cancer research at the University of Toronto, cautioned that the women with breast cancer in the study and those without weren't well matched in terms of their educational levels.

"I don't think there’s any real evidence that’s substantial enough that should raise concern among women that they're at high risk of breast cancer based on their occupation," Narod said.

"There's been no compelling evidence yet which is strong enough that we should regulate workplace exposures with breast cancer," he added.

Sandy Knight, 53, of Burlington, Ont., who worked in the plastics industry in Windsor from 1978 to 1988, would like to see safer substitutes used for carcinogens when possible.

When Knight was diagnosed with premenopausal breast cancer in 2000, she was angry about her previous smoking, drinking and stress.

Then Brophy's team asked her about what she was exposed to on the job.

"They started giving us the facts and everything they found out and then it started to be 'Wow, maybe we better look into this further and stop blaming ourselves and look at the environment and the workplaces,'" she recalled.