A team of Toronto doctors inserted a balloon into a baby's heart wall — while he was still in the womb — to save him from potentially devastating complications after birth. 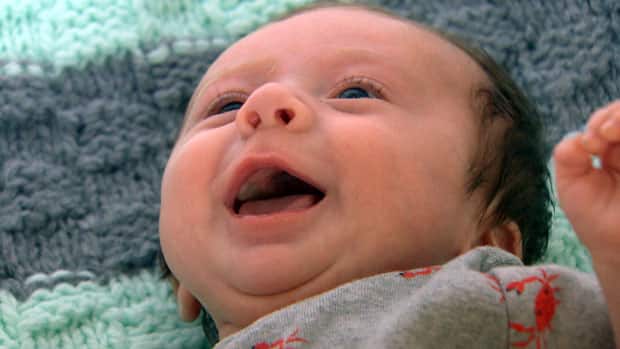 3 years agoVideo
2:10
Toronto doctors use in utero heart surgery to save baby from potentially devastating complications 2:10

Kristine Barry says when she heard her newborn baby Sebastian scream, it was "the most amazing sound I've ever heard."

"They always prepped us for a blue baby," she said. "They always said that he was going to be blue and not vocal because of the lack of oxygen."

But when Sebastian arrived at Mount Sinai Hospital in Toronto in May, "there's this little guy all pink and screaming."

It would have been a very different and traumatic birth if Sebastian had not undergone a surgical procedure on his heart, known as a balloon atrial septoplasty, five days earlier — while he was still in his mother's womb.

During Barry's prenatal checkups, Sebastian was diagnosed with a severe congenital heart defect, in which the two main arteries of the heart are reversed. His case was especially complex because the interior walls of his heart were sealed shut, so that blood couldn't flow between the chambers to pick up oxygen.

"We had a baby with the two sides of the circulation that were not communicating. There was no opening between the upper chambers and the lower chambers and the vessels were coming off the wrong side," says Dr. Greg Ryan, head of the fetal medicine program at Mount Sinai Hospital.

"So what we had to do was to create a communication to allow the blood to mix."

In most cases, newborn babies with heart defects can be rushed from the neonatal unit at Mount Sinai Hospital to the Hospital for Sick Children (SickKids) across the street, says Dr. Rajiv Chaturvedi, a cardiologist at SickKids.

But the closed walls of Sebastian's heart made it unable to automatically circulate oxygen once he lost access to the oxygen supplied via the placenta. That meant there would be little time to save Sebastian from severe complications after he left his mother's womb.

"The clock ticks [so] that you have a few minutes and you start having brain damage and other organ damage," says Dr. Edgar Jaeggi, head of the fetal cardiac program at SickKids.

So on May 18, Ryan, Chaturvedi and Jaeggi, along with dozens of clinicians from both Mount Sinai Hospital and SickKids performed a risky and remarkable procedure: a balloon atrial septoplasty while the baby is still in the uterus.

With neonatal and cardiac surgeons on standby in case an emergency cesarean section became necessary, the doctors used a needle to insert a balloon through Barry's uterus and into Sebastian's heart, making a small hole to open up the heart's interior wall, so oxygenated blood could pass through.

Although the procedure was a success, it wasn't a cure for Sebastian's original heart defect, and he would still require open-heart surgery after birth.  But it meant that Barry could deliver him normally, without the trauma of knowing it would be a frantic race against time to whisk her baby away and supply him with oxygen.

In fact, Sebastian's father, Christopher Havill, had time to cut the umbilical cord — and he remembers the team even told them they could take pictures.

Surgeons repeated the same procedure they had done in-utero on Sebastian that day to further ensure the flow of oxygen.  A week later, he had open-heart surgery to fix his reversed arteries.  Two months later, he's a normal baby at home in Barrie, Ont., fussing on his mother's lap as his dad smiles and soothes him.

The doctors have even told the couple that Sebastian's scar from his open heart surgery will eventually fade, and will be barely visible by adulthood.

With files from Vik Adhopia and Marcy Cuttler