The brains of some deceased athletes, including NHL players, show four stages of a degenerative disorder that offer a glimpse into the potential long-term impact of brain injuries, U.S. researchers say. 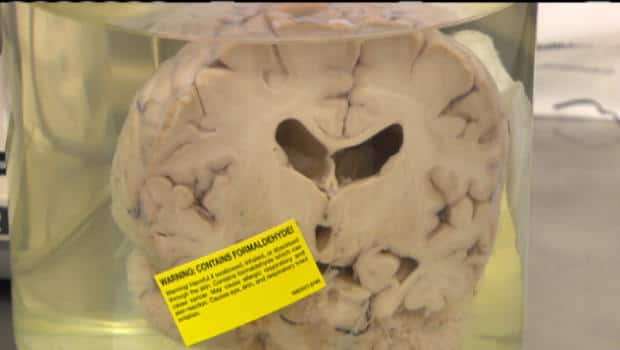 8 years agoVideo
4:09
The brains of some deceased athletes show 4 stages of a degenerative disorder that offer a glimpse into the potential long-term impact of brain injuries, U.S. researchers say 4:09

The brains of some deceased athletes, including NHL players, show four stages of a degenerative disorder that offer a glimpse into the potential long-term impact of brain injuries, U.S. researchers say.

The degenerative brain disease chronic traumatic encephalopathy (CTE) is associated with repeated brain trauma. It can lead to memory problems, emotional problems, behavioural problems such as loss of impulse control and eventually dementia.

Now researchers at Boston University have used post-mortem tests on the brains of 85 men aged 17 to 98 and interviews with family members to describe four stages of CTE, compared with neurodegenerative diseases such as Alzheimer's disease and Parkinson's disease.

Of the 85 men with histories of repetitive mild traumatic brain injury, researchers found evidence of CTE in 68, including 64 athletes, 21 military veterans and one person who showed head-banging behaviour.

"This study clearly shows that for some athletes and war fighters, there may be severe and devastating long-term consequences of repetitive brain trauma that has traditionally been considered only mild," Dr. Ann McKee, of the Center for the Study of Traumatic Encephalopathy at Boston University, and her co-authors concluded in the journal Brain.

The subjects included 33 men who played in the NFL, one in the CFL, four in the NHL and seven who had been professional boxers. The researchers also examined the brains of 18 cognitively normal people the same ages with no known history of mild traumatic brain injury.

Interviews with relatives and loved ones of brain donors pointed to these symptoms:

Worsening of brain degeneration was associated with decreases in brain weight and more severe cognitive problems on the staging scale, the study's authors said.

"There's no evidence that a few isolated, well-managed concussions give rise to this disease," McKee said. "It's actually a very long-standing exposure to repetitive brain trauma, and that can be subconcussive injury."

Unlike Alzheimer's disease, the clinical course of CTE is slow with about 11 to 14 years between stages, the researchers noted.

They cautioned the findings can't be generalized to CTE in living athletes and veterans. That's because families of people who showed behavioural or cognitive symptoms would be more likely to participate in a brain donation program than families of normally functioning individuals.

To overcome this problem, the researchers called for future studies to include those who experienced mild traumatic brain injury and did not develop behavioural or cognitive problems.

Fleiszer estimates he had 60 to 100 concussive episodes during his career, including three major ones. He doesn't have any symptoms and plans to donate his brain.

"I think unfortunately you still see people that are associated with games like hockey and football and rugby who are resistant to acknowledging the fact that this is an issue," Fleiszer said.

Fleiszer said he's concerned that if the problem continues unchecked then parents will not let their children play sports and enjoy the personal development that comes with athletics.

Fleizser now does work with the Sports Legacy Institute, which tries to advance the study, treatment and prevention of brain trauma.

McKee's team is planning to study more retired NFL athletes at death as well as more veterans from Iraq and Afghanistan with histories of blast injuries.

Questions that remain include how much head trauma causes the condition, what type, how often and at what age people are most susceptible.

With files from CBC's Kelly Crowe and Marijka Hurko