Artificial sweeteners may exacerbate, rather than prevent, metabolic disorders such as Type 2 diabetes, a study suggests. 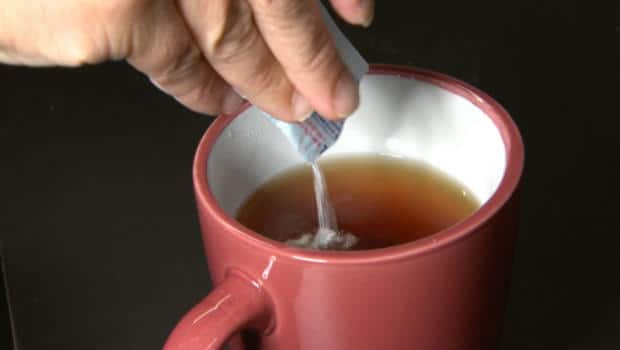 Artificial sweeteners may cause obesity

6 years agoVideo
2:22
Consumption of artificial sweeteners coincides with the obesity and diabetes epidemics 2:22

Artificial sweeteners may exacerbate, rather than prevent, metabolic disorders such as Type 2 diabetes, a study suggests.

Calorie-free artificial sweeteners are often chosen by dieters in part because they are thought not to raise blood sugar levels.

In Wednesday’s issue of the journal Nature, researchers report that artificial sweeteners increase the blood sugar levels in both mice and humans by interfering with microbes in the gut. Increased blood sugar levels are an early indicator of Type 2 diabetes and metabolic disease.

The increase in consumption of artificial sweeteners coincides with the obesity and diabetes epidemics, Eran Segal of the Weizmann Institute of Science in Rehovot, Israel, and his co-authors said.

"Our findings suggest that non-caloric artificial sweeteners may have directly contributed to enhancing the exact epidemic that they themselves were intended to fight."

The study included a series of experiments.

Mice whose drinking water was supplemented with artificial sweetener developed glucose intolerance compared with mice drinking water alone, or water with just sugar in it. The effect occurred both in mice fed normal chow and those on a high-fat diet.

When antibiotics were used to kill off gut bacteria, the artificial sweetener effect on glucose intolerance in mice fed either diet was restored to normal.

Taken together, the data indicate that artificial sweeteners "may contribute to, rather than alleviate, obesity-related metabolic conditions, by altering the composition and function of bacterial populations in the gut," Cathryn Nagler and Taylor Feehley of the pathology department at the University of Chicago said in a journal commentary.

In the human part of the research, gut bacteria were analyzed from 381 non-diabetics averaging age 43 who were participating in an ongoing nutrition study.  They found differences in the gut bacteria among those who consumed artificial sweeteners compared with those who did not.

In the final portion of the study, seven human volunteers who didn’t normally consume artificial sweeteners added it to their diets for seven days. After four days, blood glucose levels rose and the makeup of their gut bacteria changed in half of the participants, just as in the mice experiment.

To confirm the findings, the researchers also transferred feces from people who consume artificial sweeteners into mice that were bred to have sterile intestines and never consumed it before. The mice who had saccharin became glucose intolerant, which suggests that the artificial sweetener caused the unhealthy effect.

It could be that artificial sweeteners lead to an expansion of bacterial species that extract energy from food that often gets stored as fat, contributing to obesity, Nagler said. It's also possible the sweeteners could suppress the growth of other bacteria that seem to stave off insulin resistance, she said.

The commentators suggested studies to identify specific bacterial populations that promote resistance to weight gain or improve glucose tolerance could be useful as treatments.

Other experts who were not involved in the research called the findings intriguing, but noted that the human findings in particular were very preliminary in terms of considering changes to nutrition recommendations.

"This research raises caution that [non-caloric artificial sweeteners] may not represent the 'innocent magic bullet' they were intended to be to help with the obesity and diabetes epidemics, but it does not yet provide sufficient evidence to alter public health and clinical practice," said Nita Forouhi, program leader at the Medical Research Council's epidemiology unit at Cambridge University.