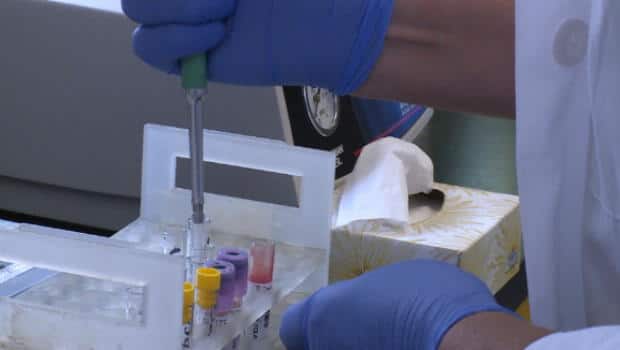 6 years ago
2:53
Canada is not doing a good job keeping track of drug-resistant bacteria, says a report by Canada's medical microbiologists 2:53

More and more infections in Europe are proving able to evade even the most powerful, last-resort antibiotics, posing an alarming threat to patient safety in the region, health officials said on Monday.

"With a smaller number of effective antibiotics, we are gradually returning to the 'pre-antibiotic era' when bacterial diseases could not be treated and most patients would die from their infection," said Marc Sprenger, the ECDC's director.

The Stockholm-based ECDC also said it had for the first time collected data on resistance among infections caused by a bacteria called Klebsiella pneumoniae to a powerful but older antibiotic known as colistin — and had found alarming signs.

"According to our data, resistance to colistin was observed in 5 per cent of Klebsiella pneumoniae isolates for the EU overall," Sprenger said.

Klebsiella pneumoniae is a common cause of pneumonia, urinary tract and bloodstream infections in hospital patients. If antibiotics are unable to treat them effectively, patients can face long, costly stays in hospital, and risk dying.

Colistin is a last-resort antibiotic developed several decades ago that has serious side-effects and limitations to its use, but has become essential for treating carbapenem-resistant Klebsiella pneumoniae infections.

Drug resistance is driven by the misuse and overuse of antibiotics, which encourages bacteria to evolve to survive and develop new ways of beating the drugs.

In Canada, a report from experts in infectious diseases, microbiology, public health and veterinary medicine found "significant gaps" in the country's surveillance systems for antibiotic resistance.

"I wouldn't say we're flying blind, but it is sort of like we're flying with an eye patch on and mud-splattered goggles," said report author Dr. David Patrick of the University of British Columbia in Vancouver.

The Association of Medical Microbiology and Infectious Diseases Canada (AMMI) concluded better data on antimicrobial resistance is needed, such as in the community outside of large hospitals.

Patrick and his co-authors concluded more comprehensive data is needed to be able to analyze the problem, develop a response and assess the effectiveness of that response.

"For the potential benefits, the monetary investments needed are relatively small, but the goodwill and collaboration are large. However, history may judge us harshly should we fail to protect the effectiveness of antimicrobials in animal and human health."

While European countries and the U.S. are getting a handle on what the problems are with antimicrobial resistance, Canada lags behind, said Dr. Michael Gardam, an infectious diseases specialist at the University Health Network in Toronto.

"All those people going into their family doctors that are getting urine cultures done, or getting throat swabs done,  none of that information is making it into any surveillance system," Gardam said.

Broad surveillance information from the entire health-care system, from family doctors to hospitals and long-term care, is needed to make decisions about how to tackle resistance, Gardam said.

"We have tens of thousands of doctor visits now for routine infections where the rate of resistance is actually quite high," Patrick said. "It has gone from nothing to one in four urinary tract infections, one in four skin infections where you are dealing with kind of difficult, resistant bugs."

About two weeks ago, the Public Health Agency of Canada released a framework to fight antimicrobial resistance through surveillance and stewardship, such as promoting appropriate use of antibiotics.

Gardam said it remains to be seen exactly how the new framework will help.

The AMMI report noted that Canada has had repeated recommendations on antibiotic resistance from a range of sources that "portray a history of consistently known goals that have not yet been met."