Sheldon McKenzie came to Canada under a program that provides foreign labour to Canadian farms, but after suffering a serious head injury at work, his family was forced to intervene to keep him from being shipped back to Jamaica without the medical care he needed. 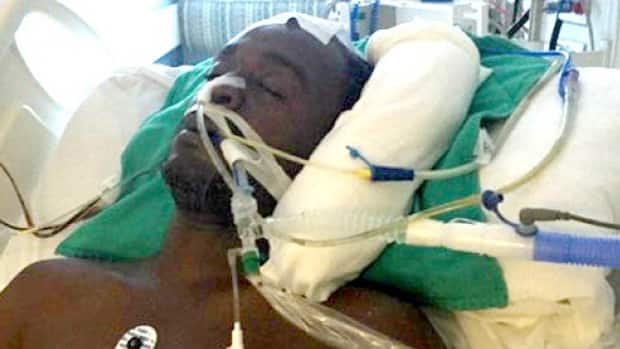 5 years ago
2:25
Cousin of Jamaican man who died from workplace injury says when workers get ill 'they just dispose of them' 2:25

The family of a migrant farm worker who died several months after a severe head injury says the program that brought him to Canada stripped him of his labour rights after he was hurt, then tried to cut off his access to health care.

Sheldon McKenzie, 39, suffered the injury at work, and his family say they were forced to intervene to keep him from being shipped back to Jamaica without getting the medical care he required.

His cousin, Marcia Barrett who lives in Winnipeg, says more needs to be done to protect the rights of migrant labourers who come to work under the Seasonal Agricultural Worker Program that provides temporary foreign labour to Canadian farms.   ​

Hundreds of those workers have been sent home from Canada in similar circumstances, a practice known as "medical repatriation."

"It's worse than slavery — they dispose of them," Barrett told Go Public.

For 12 years, McKenzie went back and forth from Jamaica, spending months in Canada doing manual labour on farms. The money he made was sent back home to his wife and daughters.

In late 2014, he started working on a tomato farm near Leamington, Ont. It would be his last job.

In January 2015, Barrett got a call saying her cousin had hit his head at work and was in a coma in hospital.

"His face was completely bandaged, he was swollen. We got there, he was on life-support," Barrett said.

His condition was so bad, doctors had to remove part of his brain due to swelling and internal bleeding.

Barrett says right away there was pressure from McKenzie's liaison officer to have him return to Jamaica. No longer able to work, he lost his work visa and no longer qualified for health-care coverage.

Barrett expected support from the Jamaican liaison officer assigned to McKenzie's case as part of the seasonal worker program, but she says that didn't happen.

"What I found out after much talking to people who will never talk on camera, when the migrants are hurt, sometimes they don't take them to the hospital, they ship them back to Jamaica," she says.

"Their only goal was to ship him back home. The only way he wasn't shipped back in three days is because we dug our heels in and said no because the health care in Jamaica is not up to par to take care of the type of injury that he had."

Go Public asked Carlton Anderson, the chief Jamaican liaison officer for Canada, about the allegation that liaisons are helping to have farm workers sent home quickly after being injured.

In a statement, he said he is unaware of that happening saying "this type of action by an officer would be inconsistent with the officer's obligation and commitment to the worker."

Anderson, whose office works with the Canadian government to administer the program, said such actions would not be tolerated.

"The well-being of the worker is the prime reason for our existence or presence in Canada," he wrote. "However, there is no work without the program and there is no program without the employers."

About 30,000 farm workers come to Canada annually through the Seasonal Agricultural Worker Program. That number has steadily increased over the last decade. Most come from Mexico and Jamaica, but also from several Caribbean countries.

The program is intended to allow Canadian farmers to hire workers on temporary visas during the planting and harvesting seasons when they are unable to find local workers to fulfil their labour demands.

Canadian farmers who hire the workers get to decide who can, and can't, return. The farms work with Jamaican liaisons when deciding who can come back. Barrett says that leaves workers powerless.

"If they complain, they get sent home and don't come back. Some are the only support for their family," she says.

The program has been running for 50 years, but Canadian researchers have only recently been able to access privately collected data on illnesses and injuries that led to workers being sent home.

A study published in the Canadian Medical Association Journal Open reports that between 2001 and 2011, 787 migrant farm workers in Ontario were terminated and sent back to their countries of origin for medical reasons. It found the workers were a "unique and vulnerable occupational group," because the federal government will take away an individual's work visa if they get ill or hurt, then the provinces cut off access to health care.

Only one in 50 injured or sick workers left willingly, according to the study.

Advocates call it 'an apartheid system'

For years, Chris Ramsaroop, an organizer with Justicia for Migrant Workers has been trying to get the government to make changes to the program's rules to give workers more rights. He says injured workers are routinely cut off from health-care coverage, and appeals can take months.

"To be blunt, I consider this an apartheid system. Migrant workers live and work under a different set of legal rights and obligation than we do. We [Canadians] are not denied basic human rights, we are not denied health care. They are seen as disposable and temporary," Ramsaroop says.

This week, politicians will be looking at the Seasonal Agricultural Worker Program, which falls under the umbrella of the Temporary Foreign Worker Program.

The standing committee on human resources, skills and social development and the status of persons with disabilities will examine changes to the TFWP made by the Conservative government in 2014 after a series of Go Public stories.

The committee's recommendations will help guide the Liberals on changes required to the TFWP, the government has said it wants to make in the fall.

After Go Public brought Sheldon McKenzie's case to the attention of the Minister of Employment, Workforce Development and Labour MaryAnn Mihychuk, who promised to make the Seasonal Agricultural Worker Program part of the review.

"It's shocking. You asked the question how many foreign temporary workers have died on Canadian soil? It was surprising to learn that the Canadian government doesn't keep track ... It's clearly a lack of communication and awareness of what's happening … It's definitely something we should be looking at," Mihychuk says.

With files from Manjula Dufresne