Norman Shewaybick walked more than 1,000 kilometres along the winter ice roads north of Thunder Bay, Ont., carrying his grief at the loss of his wife and dragging the oxygen tank he says could have saved her life. 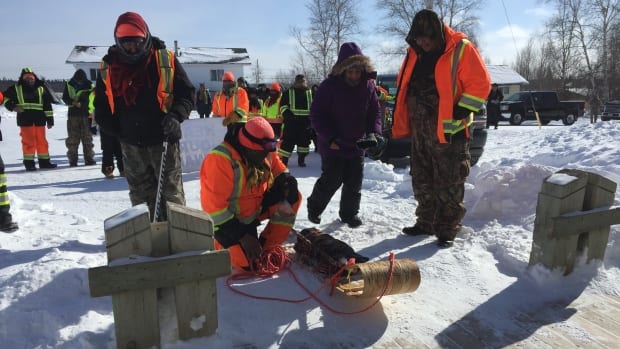 Man drags oxygen tank on toboggan for 17 days in protest

5 years agoVideo
0:36
Norman Shewaybick says his wife died after the oxygen supply ran out at the local nursing station 0:36

Superior Morning6:18Norman Shewabick - A Promise Kept
Jody Porter takes ud to Webequie First Nation to hear what the end of a 500 kilometre journey, on foot, in freezing temperatures sounds like. 6:18

Norman Shewaybick walked for more than 1,000 kilometres along the winter ice roads north of Thunder Bay, Ont., carrying his grief at the loss of his wife and dragging the oxygen tank he says could have saved her life.

The 17-day journey ended on Monday when Shewaybick arrived home in Webequie First Nation, falling to his knees as he was greeted by family and friends.

"My promise is done. I promised her I would bring it back," he cried as he lifted up the toboggan holding the oxygen tank.

Shewaybick said his wife died after the oxygen supply ran out at the nursing station in Webequie. He said he made a promise to her that he would make sure no one else suffered in the same way.

"It was my 26th wedding anniversary and that's what Health Canada gave me for an anniversary present — a dead wife," Shewaybick said as he placed the oxygen tank between himself and a Health Canada representative at a community meeting to mark the end of the walk.

Shewaybick's walk has already prompted Health Canada, which operates the nursing stations in northern Ontario's remote First Nations, to promise an oxygen concentrator for every community.

"We are now instituting a whole review of our nursing stations in Ontario," said Keith Conn, the regional director of the First Nations and Inuit Health Branch of Health Canada.

That's something Canada's auditor general called for in a report last year that said Health Canada has no way of assessing if nursing stations meet the needs of First Nations communities they serve.

"It's a small step, it's only the beginning, there needs to be a lot more work around health and wellness," Conn said during a community meeting in Webequie.

Several people spoke at the meeting about their concerns, listing relatives who they felt died after being ignored or ill-treated by the health care system.

Shawaybick said he's pleased to see that his long journey is breaking the silence about the experiences of First Nations people in the health care system.

"The way it's set up right now, it's killing our people." he said. "Our people are dying."