The Pour: Treating Alcoholics with Wine

It starts at 7:30 a.m. and ends at 9:30 p.m. It’s called “the pour” -- an hourly dose of wine that’s given to chronic alcoholics. It’s a bold move, but still a controversial way to deal with alcoholism. 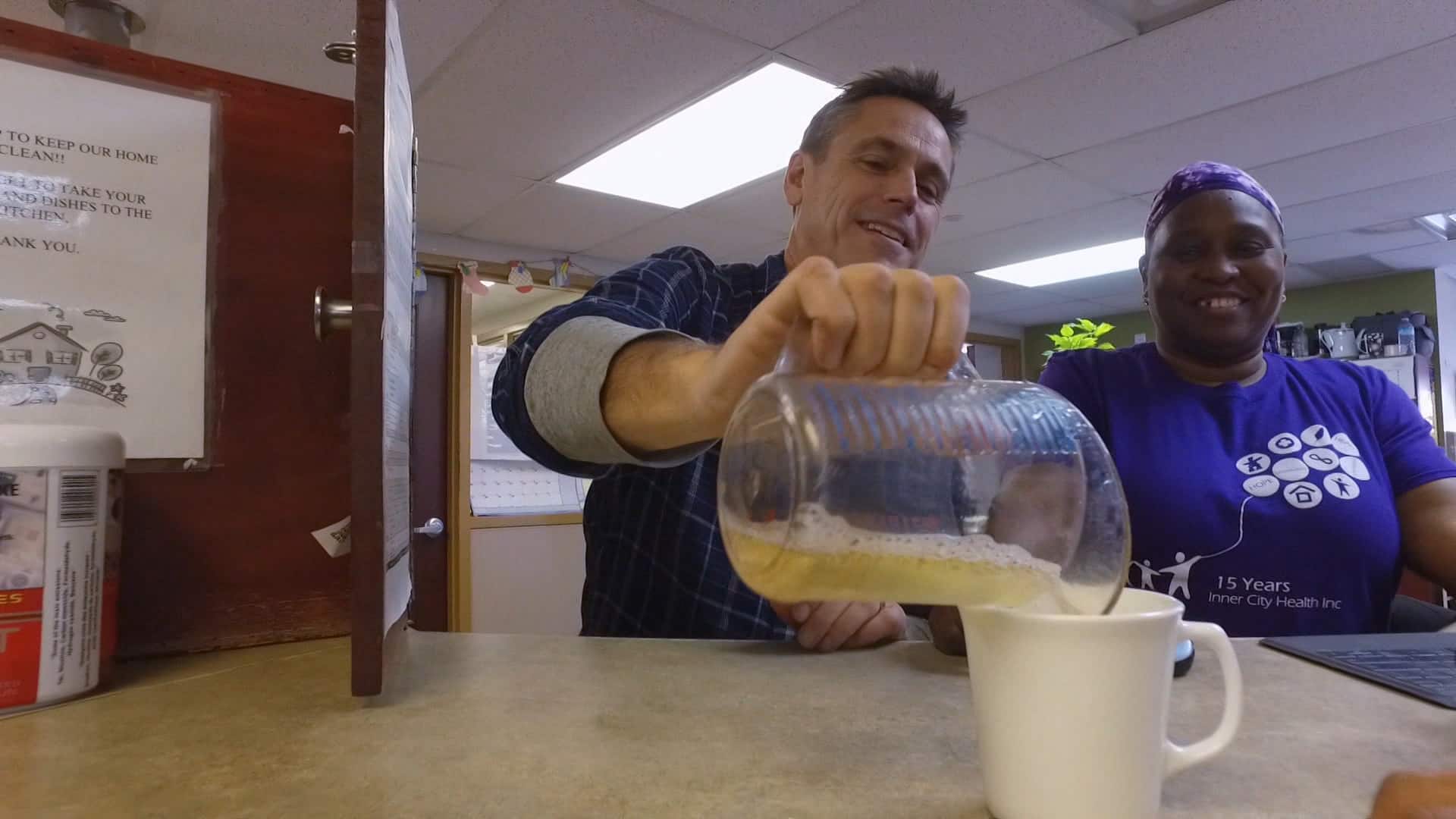 4 years ago
45:12
Giving chronic alcoholics an hourly dose of wine - a bold but controversial way to deal with alcoholism. Mark Kelley visits an Ottawa treatment centre to meet the residents and the care workers involved in a program that has attracted attention from around the world. 45:12

A controversial Canadian program that gives a regulated, hourly dose of wine to alcoholics to help manage their addiction and keep them safe has caught the attention of health care researchers in Australia.

The managed alcohol programs (MAPs) that have sparked the international interest have been giving new hope and new lives to many alcoholics struggling with homelessness and troubles with addiction in communities from British Columbia to Ontario.

Kate Dolan, a professor at the National Drug and Alcohol Research Centre at the University of New South Wales in Australia, has visited programs in Ottawa and Vancouver and was impressed.

"We used to lead the world in harm reduction services," Dolan tells the fifth estate, but "the alcohol field has not progressed as much as the illicit drug use field."

Research led Dolan to Ottawa's MAP. She found MAPs to be cost-effective through reductions in spending on health care and emergency services. Participants also significantly reduce their alcohol consumption and learn a sense of community.

When participants arrive at a MAP, Dolan wrote in her study, "it is all about me, myself and I." But as they progress, they lose the "chip on their shoulder and open up."

While in Ottawa, Dolan spent time with the two non-profit organizations responsible for the Ottawa program: the Shepherds of Good Hope and Ottawa Inner City Health.

She also met staff and participants at the Targeted Engagement and Diversion (TED) Centre that accepts patients from paramedics and police.

Here, they are kept under observation rather than being admitted to hospital. It's the first step in entering the managed alcohol program. This approach, Dolan writes, has saved $2 million in hospital costs. She also visited the Oaks, a residence for stabilized alcoholics.

Key stakeholders in Sydney are now designing a business plan based on Dolan's research.

Harm reduction has become the standard for working with injection drug users, but it has been a tough sell for dealing with chronic alcoholics because abstinence has always been considered the mainstream treatment.

Dr. Jeff Turnbull helped launch the MAP in Ottawa alongside Wendy Muckle of Ottawa Inner City Health and Sheila Burnett of Shepherds of Good Hope more than 15 years ago.

In an interview with the fifth estate, Turnbull said the fact that international researchers and public health officials have expressed interest shows the scope of the difficulties dealing with addiction and mental health issues.

"This is a massive problem. It has huge personal impact, it has a huge health impact and economic impact," he says.

At first, establishing the MAP in Ottawa, wasn't easy. Turnbull told the fifth estate he received death threats from extreme opponents who believe abstinence is the only solution for problem drinkers.

"To get into the program you have to be an inveterate ... long-term alcoholic who's failed at traditional treatment programs."

'Do you abandon them?'

"They're drinking less than they were. But what do you do when somebody doesn't, can't or won't stop drinking? Do you abandon them?" he says.

"We don't do that in palliative care when somebody's failed their chemotherapy."

Most of the 55 residents at the Oaks were homeless and living on the streets, many suffering from mental health issues. About 10 are mental health patients who do not receive the alcohol.

"By far the majority of all of the people who have come through these doors have stabilized, gotten better, got control of their life and are still drinking," Turnbull says. "I wish they weren't, but by far the majority are substantially better than they were when they came in."

The 12 per cent white wine is made at the Oaks. Depending on their treatment, residents may receive a watered-down drink. While they are limited to 15 drinks per day, some residents opt to reduce their amount of consumption.

Residents pay for their alcohol, tobacco and room and board out of their social assistance or Canada Pension Plan cheques.

Ray MacQuatt, program manager of the Oaks, helps them manage their money, a challenge for people who have had alcohol as the No. 1 priority in their life.

When he first heard of the program, he thought it was crazy.

"Once I saw how the program worked, and the transition of the residents from where they were before to once they were in the program, I totally understood it."

MacQuatt helped Jimmy Bellefeuille get into the program.

The 57-year-old had lost his wife, home and small business after a life-long struggle with alcoholism. He had failed at six abstinence-based rehab programs. Bellefeuille was left with nothing and had nowhere to go.

"I lived on the street for seven years," he says.

"I lived under a tractor-trailer, and I slept under that trailer for five months. It was horrible. You can't wash, you can't change, you have nothing."

Bellefeuille turned to rubbing alcohol and mouthwash to feed his addiction.

In 2013, he discovered the Shepherds of Good Hope downtown shelter, where it took a year and a half to stabilize him. He was diagnosed with depression and moved to the Oaks in August 2014.

"At 7:30, they give me seven ounces, and then after that it's five ounces," he says. "It has enough alcohol in it to keep us stable."

MacQuatt describes the program as harm reduction for the whole community, not just the participant.

Ottawa police Sgt. John Gibbons recounts a story of how Ottawa police were called in 364 times in one year to deal with one homeless alcoholic. Once the man was in the program, police only dealt with him twice after that.

"That's not including the paramedics dealing with him," says Gibbons. "It was a huge, huge cost savings."

But MacQuatt says there's a need for more facilities.

"I can fill five of these buildings," says MacQuatt. He also says that while he gets maybe three calls a week from people who aren't homeless. "We unfortunately only serve the homeless."