Toronto's Princess of Wales Theatre and Royal Alexandra Theatre will dim their marquee lights on this evening in memory of Canadian musical theatre star Michael Burgess, the head of Mirvish Productions says.

'He will be sorely missed,' says theatre mogul David Mirvish Toronto's Royal Alexandra Theatre will dim its marquee lights this evening to honour the late Michael Burgess, the Canadian tenor who famously took its stage as Jean Valjean in Les Misérables.

Burgess died peacefully Monday evening in a Toronto hospice, surrounded by his family, according to family friend Bruce Bowser.

The 70-year-old musical theatre star had struggled with basal cell carcinoma for a number of years.

He was magnificent in the role [of Jean Valjean ] and led the all-Canadian cast to great heights.- David Mirvish, theatre producer

Burgess played the role of Jean Valjean in more than 1,000 performances of Les Misérables at the historic Royal Alex and on tour across Canada during the 1980s. He also appeared in the production's 10th-anniversary concert at Royal Albert Hall in London.

"Michael created the role of Jean Valjean in Les Misérables, which was one of the first international blockbusters to have its own production in Canada with a local cast, instead of a touring version. He was magnificent in the role and led the all-Canadian cast to great heights," theatre mogul David Mirvish, head of Mirvish Productions, said in a statement Monday night.

Both the Royal Alex and Princess of Wales Theatre will dim their marquee lights for two minutes Tuesday evening in memory of Burgess, Mirvish said.

"He was a very talented performer with a spellbinding voice and a truly arresting stage presence... Canada has lost one of its major artists. He will be sorely missed."

Burgess was "that kind of performer that could walk the line between opera and musical theatre and connect with an audience," Daphne Burt, manager of artistic planning with the National Arts Centre Orchestra, told CBC News on Tuesday.

"You look out at a darkened concert hall and you can't see faces, but it still felt like he was looking straight into people's eyes."

The NAC in Ottawa has lowered its flag to half-mast to honour Burgess.

For hockey fans, Burgess was known as the singer of the national anthem at Toronto Maple Leafs home games for many years. In 1992, he become the first person  to sing O Canada at a World Series baseball game.

In 2013, Burgess was inducted into the Bobby Orr Hall of Fame in Parry Sound, Ont., as an honoured member.

"Michael Burgess is one of those rare individuals ... [whose] presence transcends across sports, theatre and music seamlessly," reads a citation on the Hall of Fame's site.

"Michael shares his amazing voice each and every time we ask, without hesitation.  His performance of Danny Boy has often brought our audiences to tears." 5 years agoVideo
2:24
Best known for his portrayal of Jean Valjean in the Toronto production of Les Miserables 2:24

Born in Regina, Burgess was the eldest of seven children and spent his formative years in Toronto, singing at St. Michael's Choir School. He later attended the University of Ottawa.

He first gained national attention in 1974 when he was specifically chosen for a leading tenor role in a Toronto production of La Bohème, despite having never performed in a professional opera before.

Instead, he had spent the first years of his professional career performing in plays and musical comedies, including on the Stratford Festival stage.

After other notable performances, including in Twelfth Night at the National Arts Centre in Ottawa, Burgess was tiring of singing roles when he was offered the career-changing, starring role in Les Miserables.

"I thought Jean Valjean was a wonderful role, but I wasn't sure I wanted to try out, I don't know why," he recalled to the Globe and Mail in 1991.

Countless theatre fans are thankful he did take the role, including David Mucci, who sang in the chorus and later served as Burgess's understudy in Les Misérables and now works as managing director of Mirvish Productions.

"The role of Jean Valjean is like a mountain to climb, for male singers, certainly for male tenors, male musical theatre performance. There's no greater mountain than Jean Valjean," Mucci said Tuesday.

"When Michael came to work, he was going to climb that mountain eight times a week and the rest of us followed. That was a really important part of the show and part of the success of Les Mis: Michael and Michael's work ethic." 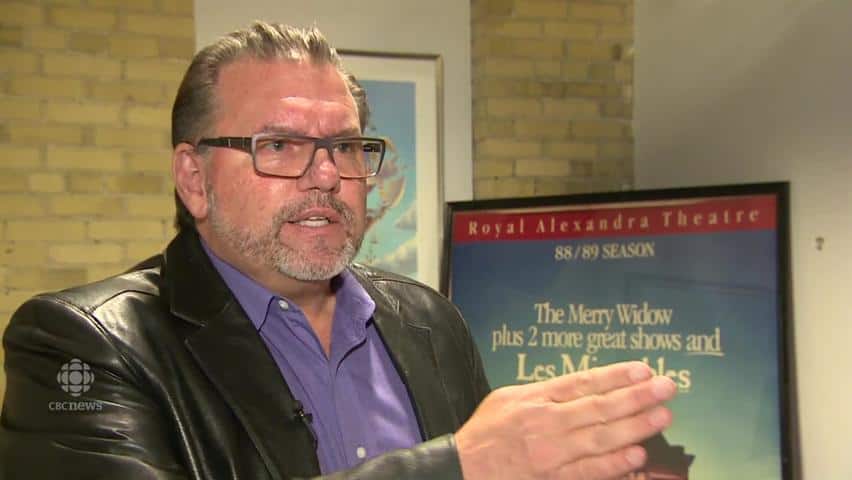 Les Mis was also where Burgess met musical theatre actress Susan Gilmore, whom he married in 1994. The couple later divorced.

Other credits include the title role in Man of La Mancha, television productions of H.M.S. Pinafore, You Must Remember This, The Beggar's Opera and The Sandy Bottom Orchestra, as well appearances on TV shows such as Street Legal, Border Town and E.N.G.

An Oct. 5 funeral is planned, according to Bowser. Burgess is survived by his son Jesse from his first marriage, his mother Dorothy and six siblings: Wayne, Bill, Cathy, Patty, Missy and Julie.

In lieu of flowers, the family has requested for donations to be made to the Dancers with Cancer campaign at the Hospital for Sick Children in Toronto.