Spotlight, which dramatizes the reporting that exposed a child sex-abuse scandal and coverup by the Catholic Church in Boston, focuses on an unlikely group of real-life heroes working in a "dying" profession: investigative journalists. 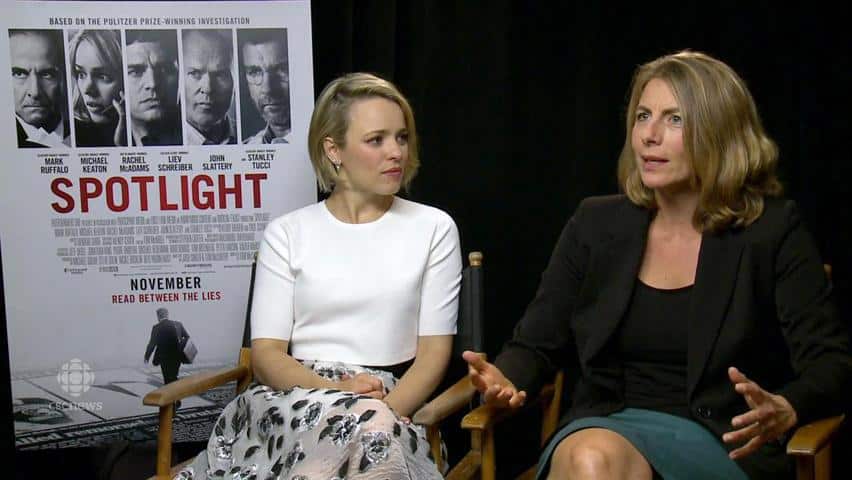 Spotlight an 'ode to investigative journalism'

The new movie Spotlight puts the focus on an endangered species: the investigative journalist.

In the summer of 2001, the Boston Globe's newly appointed editor ordered the paper's special in-depth reporting team (known as Spotlight) to follow up on a column about a local priest accused of sexually abusing children.

In the process, the journalists uncovered numerous other victims and dozens of additional priests accused of sexual assault who were being protected by the Catholic Church.

After months of digging and tracking down victims, their exposé — published in January 2002 — shocked Boston and led to similar revelations across the country and around the world.

In an age of action films about comic book characters, Spotlight focuses on an unlikely group of real-life heroes.

"The journalists in this story and the people who tell these stories under great duress a lot of the time are the heroes," actor John Slattery told CBC News during an interview at the Toronto International Film Festival in September.

"They are the people that shine light on stories that need to be told," he said.

Ironically, this film highlighting the importance of investigative journalism comes at a challenging time for newspapers and other media.

"It would be nice if there was at least some commitment to investigative reporting," said Bradlee Jr., speaking alongside Slattery.

"Newspapers these days are being decimated economically. It's kind of a bleak story."

Actor Liev Schreiber, who portrayed the paper's then-new editor Martin Baron, called the script "a wonderful love letter to a kind of journalism that is dying out."

While the exterior shooting for Spotlight was conducted in Boston, the newsroom for the Boston Globe — where much of the story takes place — was recreated in an abandoned Sears warehouse outside Toronto, where actress Rachel McAdams lives.

Sacha Pfeiffer, a reporter who was part of the Spotlight team and is portrayed by Canadian actress Rachel McAdams in the film, hopes the message of the movie will have an impact.

"We hope this movie reminds people of why it's important to have journalism and to have serious media outlets or newspapers that are willing to let reporters be out of the paper or off the air to work on really hard stories that hopefully will be worth the time they worked on them," she said.

Having already earned rave reviews on the film festival circuit and from movie critics, Spotlight is now being touted as an Oscar front-runner.

Director and co-writer Tom McCarthy hopes that the attention the movie gives to investigative journalism may lead to a renewed appreciation of the profession and a reverse in the decline of newspapers and serious media in general.

"My job is to tell the story, raise awareness and get people talking," he said. "But now we need some really smart people to figure it out."