TIFF 2016: Snowden's story shows 'the world is out of control,' says Oliver Stone

The National Security Agency's surveillance operations are 'really a secret underworld' that the public could only guess at until Edward Snowden, according to Oliver Stone.

The National Security Agency's surveillance operations are "really a secret underworld" that the public could only guess at until Edward Snowden exposed them, according to veteran American director Oliver Stone.

"The government lies about it all the time. What they're doing is illegal and they keep doing it... We'll never know the whole story, we're so many years behind already," Stone said Saturday at a Toronto International Film Festival press conference the morning after his latest movie Snowden had its world premiere.

The docudrama thriller stars Joseph Gordon-Levitt as the former NSA analyst-turned-whistleblower, who shocked the world in 2013 with his revelations of the NSA's mass electronic surveillance of foreign nations as well as U.S. citizens.

"He was really doing what he did out of a sincere love for his country," Gordon-Levitt said of the exiled Snowden, whom he met in Moscow while accompanying Stone on one of the filmmaker's multiple trips there during production.

The film charts both patriotism "where you're allegiant to your country no matter what and you don't ask any questions" as well as "the kind of patriotism [Snowden] grows into over the course of the nine years that you see in this story, where he does ask questions and that's the privilege of being from a free country like the United States of America," the actor said.

"We have the right to ask those questions, to hold the government accountable," he added.

U.S. President Barack Obama has "been one of the most efficient managers of this surveillance world," according to Stone, but there is the slim possibility that he could pardon Snowden — "despite the way he's prosecuted vigorously eight whistleblowers under the Espionage Act." 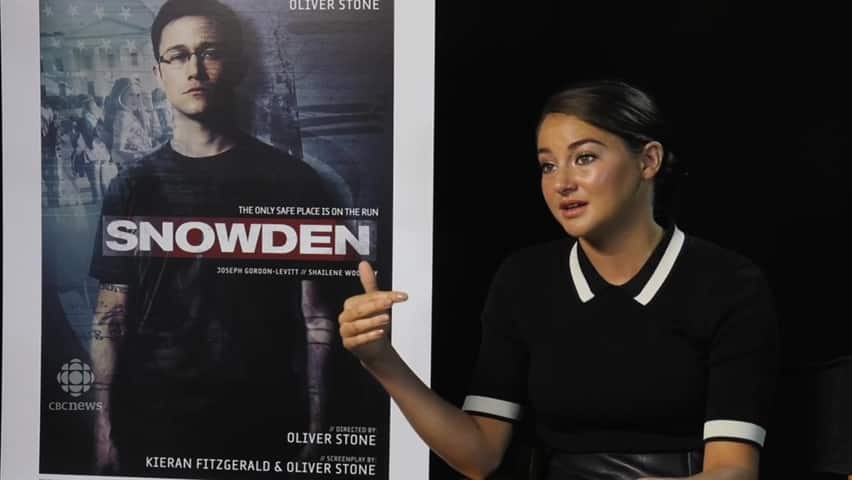 'He showed up:' Shailene Woodley on lessons to learn from Edward Snowden

4 years ago
0:42
The Snowden actress on what everyone can learn from the film about the famed NSA whistleblower. 0:42

Snowden, still living in Moscow with his girlfriend Lindsay Mills (portrayed on film by Woodley), has said he would return home to the U.S. to face trial "if he could get a fair trial," noted Stone.

"I know he would love to come home," Gordon-Levitt added. "I hope for that."

Stone will interview Snowden (appearing via satellite from Moscow) in a special event to be shown in Canadian and U.S. cinemas on Sept. 14. The movie itself opens for wide release in theatres on Sept. 16.