Just ahead of Peter Mansbridge's final broadcast as anchor of The National this week, CBC News's chief correspondent was honoured by staff at the public broadcaster's Toronto headquarters on Wednesday.

Mansbridge hosts The National for the last time Friday; officially signs off after Canada Day celebrations

As CBC staff feted Peter Mansbridge ahead of his final broadcast of The National, the chief correspondent talked little about himself but praised the colleagues gathered to send him off.

"The success that I've had has been on the shoulders of many of you in this room."

Mansbridge, who is stepping down after nearly 30 years as anchor of The National and almost 50 years as a CBC journalist, was honoured Wednesday by family, friends and co-workers at the public broadcaster's Toronto headquarters.

And though he's used to the spotlight, the anchor joked to the packed hall that it was all a bit much.

"I'm overwhelmed and I'm humbled, and for those of you who know me, those are two characteristics that don't normally get associated with me."

He later told CBC News that having something named after him was a bit hard to believe.

"I'm just this kid who started a long time ago, and was lucky enough to be a part of a great corporation that took me around the country and around the world. And now, suddenly, my name will be hanging there for future people to realize — especially journalists — that everything is possible." 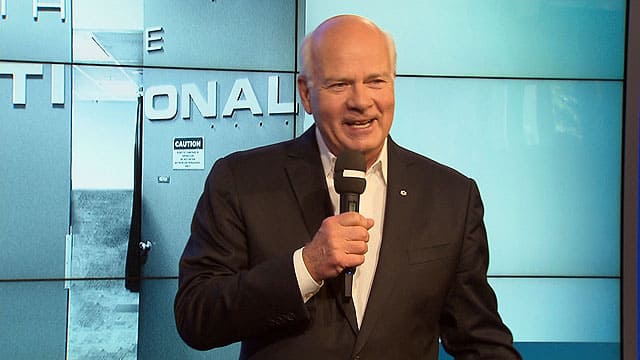 4 years ago
6:28
CBC News' chief correspondent was honoured by his colleagues in Toronto Wednesday ahead of his final broadcast 6:28

Many prominent retired CBC employees were seated around Mansbridge, including political correspondent Joe Schlesinger and former CBC News chief Tony Burman. Mansbridge's wife, Cynthia Dale, rubbed his back as tributes were given.

"It's not an easy job and he does it exceptionally well," she said. "His influence will be felt long, long after Saturday's Canada Day broadcast."

There was some star power too.

Most of the tributes touched on Mansbridge's calm demeanour and his voice. Some of his celebrity well-wishers even gave advice for what to do next; Trudeau suggested he become a voice actor after his role in the Oscar-winning animated film Zootopia.

Others hinted at his sharp sense of humour, something the public doesn't get to see much on The National. The crowd got a glimpse Wednesday: some previously unseen bloopers showed Mansbridge dancing and smoking a cigarette on set and rolling on the floor.

He even made a laughing matter out of the trip downstairs to his send-off.

There was a big lineup for the slow-moving elevators. When one finally came, a bunch of staffers squished in but there was no room for Mansbridge. He jokingly shrugged as the elevator doors closed, leaving him behind.

Mansbridge had an unconventional start in broadcasting: he landed his first radio job at the age of 19 when the then airport ticket agent caught the attention of a CBC station manager in Churchill, Man., while making a flight announcement — someone he thanked during his speech Wednesday.

From his start as a late-night CBC Radio host, he eventually moved into a field reporter role for CBC Radio and then CBC Television. In 1982, he began hosting The National on weekends and occasionally filling in for anchor Knowlton Nash before officially taking over in 1988.

Over the years, he has anchored CBC News coverage of major international and Canadian events, from the Sept. 11, 2001 attacks to 13 Olympics, 14 federal elections and 34 Canada Day celebrations. He has conducted an estimated 15,000 interviews, including of Canadian and global leaders.

He serves as chancellor of Mount Allison University in New Brunswick, has received honorary degrees from a host of Canadian universities and was named an officer of the Order of Canada in 2008.

Mansbridge was also inducted into the Canadian News Hall of Fame and awarded a lifetime achievement honour by the RTDNA.

He will host his final broadcast of The National from Ottawa on Friday and give his final sign-off as chief correspondent after anchoring CBC's sesquicentennial Canada Day coverage on Saturday.

With files from Jessica Wong