Lin-Manuel Miranda, Kerry Washington and Book of Mormon's Josh Gad are among those supporting the cast member of the Broadway musical Hamilton who called out Mike Pence after Friday's performance. 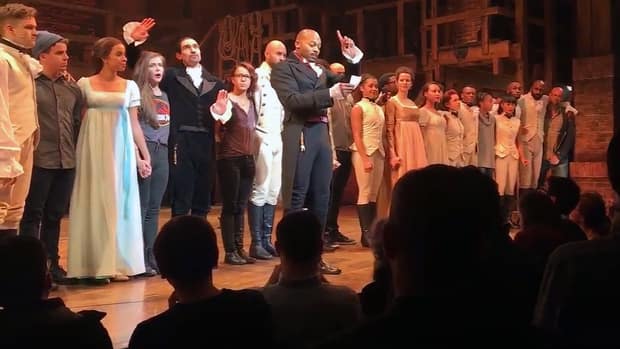 Mike Pence booed by crowd, addressed by cast of Hamilton

Lin-Manuel Miranda, Kerry Washington and Book of Mormon's Josh Gad are among those supporting the cast member of the Broadway musical Hamilton who called out Mike Pence after Friday's performance.

Actor Brandon Victor Dixon told the vice-president-elect on stage following the curtain call that the cast, continually praised for being representative and diverse, was concerned about a Trump-led government.

"We, sir, are the diverse America who are alarmed and anxious that your new administration will not protect us, our planet, our children, our parents, or defend us and uphold our inalienable rights," said Dixon, who plays Aaron Burr, America's third vice-president, in the Tony award-winning hip hop musical.

We truly hope this show has inspired you to uphold our American values- Brandon Victor Dixon, Hamilton musical

"We truly hope this show has inspired you to uphold our American values and work on behalf of all of us. All of us."

Pence ducked out from his orchestra seat before Dixon started the unexpected message, but the remarks could be heard from the hallway outside the auditorium.

"Vice-president-elect Pence, I see you walking out, but I hope you will hear us, just a few more moments."

Video posted on social media showed the crowd, which could be heard laughing and booing.

There's nothing to boo here, ladies and gentlemen," Dixon said. "We're all here sharing a story about love."

Trump tweeted Saturday that Pence was "harassed last night at the theatre by the cast of Hamilton, cameras blazing."

"The theatre must always be a safe and special place," the U.S. president-elect wrote. "The cast of Hamilton was very rude last night to a very good man, Mike Pence. Apologize!"

Our wonderful future V.P. Mike Pence was harassed last night at the theater by the cast of Hamilton, cameras blazing.This should not happen!

The Theater must always be a safe and special place.The cast of Hamilton was very rude last night to a very good man, Mike Pence. Apologize!

"Conversation is not harassment sir. And I appreciate Mike Pence for stopping to listen."

Hamilton was created by Lin-Manuel Miranda, who wrote the book, music and lyrics. He starred in the show until July of this year and won a Grammy for best musical theatre album.

Miranda tweeted his support Saturday of the cast's decision.

Others extended their support as well, including Scandal's Kerry Washington.

"Well said," she tweeted to Dixon. "We The People. Amen."

He also drew kudos from Josh Gad, known for voicing Olaf in Frozen and for his role as Elder Arnold Cunningham in the hit Broadway musical The Book of Mormon.

"I know the booing upsets some of you," Gad began his lengthy Twitter post Saturday. "But this is what happens when you run on a platform of hate."

Dixon, in his speech, encouraged the New York City audience to film and tweet so the cast's message could be spread "far and wide."

That message also prompted the hashtag BoycottHamilton from people who disagreed with what was said and the approach.

The hashtag is also being mocked online.

You know what? I support <a href="https://twitter.com/hashtag/BoycottHamilton?src=hash">#BoycottHamilton</a>. I hope it intensifies -- especially during the first week of March, maybe that Sunday matinee?

Hamilton, which won 11 Tony Awards this year, has been praised by critics and audiences, including politicians, musicians and actors. It tells the story of American Founding Father Alexander Hamilton, an immigrant from the Caribbean. It also won the Pulitzer Prize for drama and has been credited with informing young people about the country's history.

President Barack Obama and First Lady Michelle have been strong proponents of the show, with FLOTUS once calling it "the best piece of art in any form."

The cast of Hamilton includes actors who are ethnically diverse and members of the LGBT community.

As Indiana governor and a Republican, Pence stirred controversy in his efforts to ban gay marriage and certain abortion procedures and introduce a "religious objections" bill that appeared to target LGBT rights.