Tapping into memories and celebrating those she cherishes is integral to Patti Smith's creative process, the punk pioneer said in Toronto on Wednesday, as she discussed her photography show Camera Solo. 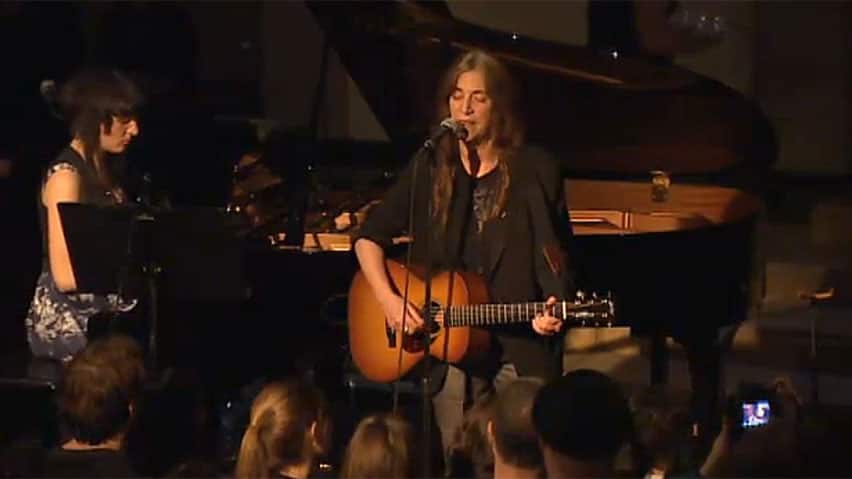 8 years agoVideo
5:44
The punk pioneer, award-winning writer and noted photographer talks to CBC's Deana Sumanac about her multi-hyphenate status and expressing different sides of herself through her music and art. 5:44

Tapping into memories and celebrating those she cherishes is an integral part of Patti Smith's creative process, the punk pioneer said in Toronto on Wednesday.

The influential musician, award-winning writer and accomplished artist is in the city to perform two shows as well as check out the Art Gallery of Ontario's current exhibit of her photography, Patti Smith: Camera Solo.

"It's not the first time I've been shown in a museum — I've shown in Europe — but it's always exciting for me. Exciting on many levels, one because I've cherished museums since I walked into one at 12 years old. But also to be in close proximity with so much great art."

For Smith, who won the 2010 U.S. National Book Award for her memoir Just Kids (about her defining relationship with photographer Robert Mapplethorpe), her multidiscipline artistic output goes back to her childhood.

The fact that she is religious about taking time to write every day comes from her early ambition to be like Little Women's Jo March, she revealed, as well as her longtime habit of keeping journals of her poetry and daily experiences — diaries that she continues to draw on for inspiration.

Meanwhile, her love of photography originated from when she made paper dolls out of old fashion magazines, back in the early 1950s.

"I started noticing that my mother's Sears catalog, which presented clothes, was a lot different than Vogue magazine's presentation of clothing," she recalled.

"I started very young picking out people that took pictures that I liked the best. So [at] 10 years old, I was a big fan of Irving Penn."

Camera Solo features about 70 black-and-white gelatin silver prints created from photos Smith snapped with her vintage Polaroid Lane 250 camera. The show also includes a short film she produced and a display of personal objects from her collection.

The selection of dreamlike, intimate-feeling images — including shots of Walt Whitman's tomb, photos of her children and images of Mapplethorpe — are items she treasures, akin to religious relics, she said.

"I would pass up something extremely valuable for my father's coffee cup, which is priceless to me, or my husband's electric guitar. I think it's the significance that we put on an object, how it resonates with us.

"I own a letter in Emily Dickinson's hand. Obviously it's treasure two-fold, because it has its value historically, monetarily and in so many ways — and also I cherish it. But I also have my daughter's baby's teeth, which are equally precious to me."

With Polaroid having ceased production of film packs and since she has just "a few boxes of expired film" left, Smith says she's being prudent in what else she captures with her vintage camera. One subject she hopes to catch while in Toronto is pianist Glenn Gould's chair.

"All my life, the handiwork of other people has kept me going," she said.

"I've always cherished writers. I cherish architects. Whether it's scientists or musicians or gardeners or cooks... the work of other people — it's endlessly interesting and exciting to me, to document people who work and create. Their resting places, their beds... it enriches my vocabulary."