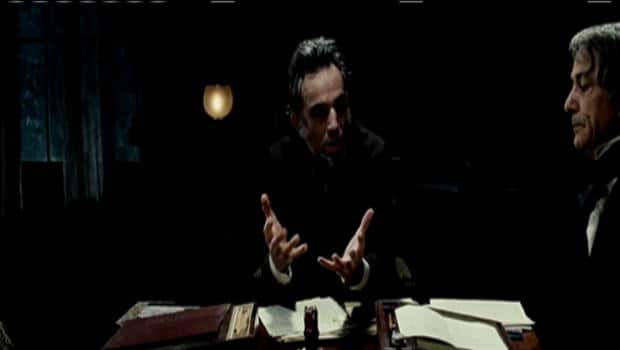 The Civil War-era presidential portrait Lincoln is the leading contender for the 85th Academy Awards, earning 12 nominations during an early-morning announcement today in Beverly Hills, Calif.

Along with best picture, the period drama earned nominations for director Steven Spielberg and actors Daniel Day-Lewis, Sally Field and Tommy Lee Jones. It explores U.S. President Abraham Lincoln's final four months as he attempts to shepherd passage of the 13th Amendment to abolish slavery before his death.

Life of Pi, based on Canadian Yann Martel's award-winning novel, is also a leading contender. It earned 11 nominations, including best picture, for director Ang Lee and two nods for the music of Mychael Danna (original score and original song for Pi's Lullaby), the Winnipeg-born and now Toronto-based composer.

"It’s like a big hug from the film community. It’s actually pretty emotional and moving, especially for a film like this, which people said could never be made," Danna told CBC News, adding that the first person he called was his mother in Burlington, Ont.

"It’s been fun to share the news with family and with friends all over the place... It’s a red-letter day. It’s one of the coolest mornings I’ve ever spent."

The other films vying for the coveted best picture trophy are:

Day-Lewis has received critical acclaim for his memorable turn as the 16th American president in Lincoln.

He's favoured in the lead actor race, but his rivals also turned in strong performances: Hugh Jackman as the heroic Jean Valjean in Les Mis, Bradley Cooper as a recovering psychiatric patient in Silver Linings Playbook, Joaquin Phoenix's animalistic turn as a Navy vet-turned-cult follower in The Master and Denzel Washington as an alcoholic airline pilot in Flight.

This year's best actress category pits the oldest-ever nominee against the youngest ever: 85-year-old French veteran Emmanuelle Riva, as an ailing woman cared for by her husband, in Amour, and spirited nine-year-old newcomer Quvenzhané Wallis of indie hit Beasts of the Southern Wild.

Rounding out the lead actress nominees are Jessica Chastain as a CIA operative hunting Osama bin Laden in Zero Dark Thirty, Naomi Watts as a tsunami survivor in The Impossible, and Jennifer Lawrence, who portrays a troubled young widow in Silver Linings Playbook.

There is stiff competition in both the supporting actor and actress categories, which are packed with powerful portrayals.

Meanwhile, in the supporting actress category, past-winner Field is an Oscar contender again, this time for her fiery portrait of former First Lady Mary Todd Lincoln. Her competition includes Anne Hathaway's well-received portrayal of an outcast mother in Les Mis and Helen Hunt's turn as a sex surrogate in the festival favourite The Sessions. Also nominated are Amy Adams, as a cult leader's steely wife in The Master, and Jacki Weaver's maternal performance in Silver Linings Playbook.

Other Canadians in the running

Another Canadian nominee is the child soldier drama War Witch (also known by its French-language name Rebelle), which has earned kudos on the international film festival circuit, including best actress honours for Rachel Mwanza, a former street kid.

"I will always remember when Rachel Mwanza, after being the first African woman to ever win the Silver Bear for Best Actress [in Berlin], returned home to the Congolese streets of Kinshasa and was greeted by passionate chants and overwhelming pride," Nguyen said in a statement.

"So, in the case of War Witch, these recognitions do make a difference. They bring back pride to a nation that greatly needs it."

War Witch is the third consecutive movie by a Quebec filmmaker to be chosen as Canada's official submission for Academy Award consideration, and become a finalist for the best foreign-language Oscar. It follows Philippe Falardeau's Monsieur Lazhar in 2012 and Denis Villeneuve's Incendies in 2011.

"I've talked to Denis and Philipe and [asked] 'How do we make it to the foreign-language nominations?' Fifty per cent of that is to try to make a good film and the other 50 per cent is to eat a bowl of Lucky Charms in the morning before they announce the results, so I ate Lucky Charms this morning...It works!"

Other Oscar nominees include:

Amour, a searing portrait of old age starring octogenarians Riva and Jean-Louis Trintignant, has been one of the most favourably reviewed films of the year and earned a spot on many best-of-2012 lists, in addition to acclaim at festivals like Cannes. Still, the five Oscar nominations earned by Haneke's French-language film Thursday morning was an unexpected surprise.

The boon of eight nominations for Silver Linings Playbook, one of the films considered "on the bubble," also meant that other titles were knocked out of contention.

Paul Thomas Anderson's The Master and Wes Anderson's teen runaway romance Moonrise Kingdom were among the notable omissions from the best-picture finalists, though the former saw its actors nominated and the latter earned a nod for its screenplay. One of the year's biggest box office hits — The Dark Knight Rises — also failed to garner any nominations, even in technical categories.

The annual honour is the world’s highest-profile film award and celebrates cinematic excellence in movies released theatrically over the past year. Voters of the U.S. Academy of Motion Picture Arts and Sciences choose winners in 24 categories.

For the first time, the academy employed an online voting system. To accommodate any potential hiccups, organizers  extended the voting deadline by one day.

The ceremony will be broadcast from the Dolby Theatre in Hollywood on Feb. 24 and will air live in more than 225 countries.