Luring new viewers to an existing TV program while retaining the authority that has helped keep audiences loyal to its brand will be no small feat for the new iteration of CBC’s flagship news program, The National, say some who’ve watched the media industry transform radically in recent years.

​When the new version of The National premieres on Monday, Canadians will see a retooled program that has changed in two significant ways — the show will feature a team of anchors presenting fewer, but longer, stories that have been beefed up with more in-depth analysis.

The changes signify a challenge CBC's flagship TV newscast and other nightly news broadcasters face — keeping and broadening their audience, particularly among younger news consumers, as they increasingly turn to new digital platforms to get their information.

"It is extremely difficult to win over new viewers within an existing platform, let alone an existing program," said Tom Rosenstiel, executive director of the Virginia-based American Press Institute.

"It is just not entirely clear whether a TV show, an evening TV show or broadcast is going to win over younger audiences, period.

"I honestly don't know if there will ever be a central gathering place for news anymore."

"You also have the risk that it will bomb, it won't work, you'll somehow lose the authority that you once had because whatever you dreamed up was missing something."

And according to Alfred Hermida, director of the University of British Columbia's Graduate School of Journalism, CBC may not have done enough soul searching,

The network failed, he said, to ask the important question of whether Canadians still need a television news show at a particular time in the evening.

The National is a "very well-established product and brand that young people are not watching," he said. "How do we get them to do it?"

But network executives believe The National is still relevant, that it continues to have a loyal television audience and can grow.

Which is why, they say, with the relaunch, it will become more like a brand — with National-branded stories published and airing throughout the day, on News Network and online. The show plans to beef up its digital presence with more online written content, podcasts and the introduction of a daily digital newsletter written by Jonathon Gatehouse, a former senior correspondent for Maclean's magazine.

If, for example, the newsletter is "your only touch point with The National, that's OK," said Michael Gruzuk, CBC News's senior director of content experience.

"We know people aren't all watching and coalescing around a TV set at the end of the day."

The National's expansion in digital follows similar moves by other traditional outlets. CNN, for example, recently launched a daily news show on Snapchat called The Update, following in the footsteps of NBC's own Snapchat show Stay Tuned. CNN is also behind Beme, a daily YouTube news show.

BuzzFeed has launched its popular AM to DM live show on Twitter. Meanwhile, shows such as Vice News Tonight, which feature no anchors but a lot of graphics to transition between segments, claim to have attracted viewers who never watch nightly news broadcasts. The show focuses not so much on the headlines of the day but on how those stories affect people in different communities.

"We decided to launch this show to see if it was possible to attract an audience that isn't really into [traditional nightly news]," said Arielle Duhaime-Ross, a reporter for Vice News Tonight.

"This is an experiment in many ways. We're a little bit more dressed down, We look like people who are on the street, and I think, for me, as a woman of colour who's gender non-conforming, having a person like me on TV or having other young individuals who look like a person that you would see on the street is beneficial."

As for the new National, viewers will see an updated set, complete with more screens, more visuals and an up-tempo theme. The set also includes a retro corner featuring classic radios and televisions, along with other historic news paraphernalia, such as the glasses of former National host Knowlton Nash 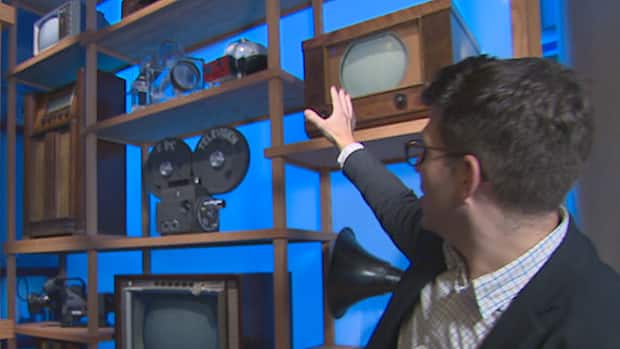 The new National's nod to the past

3 years agoVideo
1:09
Part of the new National set includes a retro corner featuring classic radios and televisions, along with other historic news paraphernalia. 1:09

But the most profound change will be the introduction of four hosts, broadcasting from three cities. Adrienne Arsenault and Ian Hanomansing, both based in Toronto, Rosemary Barton in Ottawa and Andrew Chang in Vancouver will now be charged with taking viewers through the major stories of the day.

The new anchors will either go on location for stories or will be interacting with people in the field, said Caroline Harvey, executive producer of The National.

"But we won't just be saying, 'This is what happened today.'"

That leads to another significant change. Harvey said The National will now be forced to make "hard choices" and pare down the number of stories served up each night.

"We're going to choose fewer stories. Those are stories we feel we can really take you deeper into," she said.

But that's not necessarily set in stone, and there might be days, she said, when there are a lot of stories that don't lend themselves to an in-depth, contextual approach.

Mostly though, it should always be possible to push a story forward and to add something special, she said.

"I would consider it not a success if, by week two, we're doing a 22-minute news cast on what happened today with 10 stories."

That's all good, in theory, says Rosenstiel, since in a digital world, people already know the headlines. And by the evening, there's a desire for more depth, context, interpretation and analysis.

The challenge, he said, is adding depth and not just empty words.

"How much analysis and interpretation can you offer a few hours later or is it just the sort of stretched out opinion-mongering you might have seen on cable at three in the afternoon" Rosenstiel said.