Canadian actor and comedian Mike Myers has kept a low profile recently, but in an interview with CBC News, he talks about the recent success of Saturday Night Live and the role of comedy as opposition to an unpopular president. 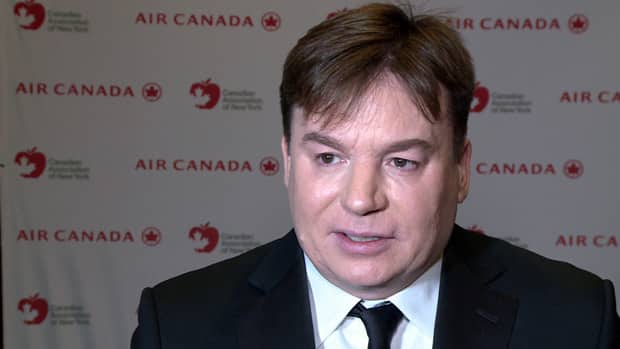 4 years ago
3:06
Shows like Saturday Night Live are firing shots at U.S. President Trump, but Canadian comedian Mike Myers says that isn't enough on its own to bring about change 3:06

While U.S. President Donald Trump's impact on the economy after two months in the White House may be hard to measure, one sector that's received a definite boost is late-night television.

Saturday Night Live is undergoing a renaissance, experiencing its highest ratings in 24 years, fuelled in no small part by Alec Baldwin's impersonation of Trump.

While Canadian SNL alum Mike Myers enjoys that performance, there's another character that really stands out for him.

Asked to weigh in on the current state of late-night TV and the role his alma mater Saturday Night Live is playing in the current political climate, Myers didn't hesitate when asked about his favourite character.

"I think that thing with Sean Spicer is just everything I love in a comedy performance. It's precise and crazy at the same time."

CBC News interviewed Myers recently at the Canadian Association of New York's Annual Maple Leaf Gala. The expat association was honouring Myers for his lifetime of work with its Arts and Letters Award.

In between discussions of his latest projects, a new thriller with Margot Robbie called Terminal and an upcoming biopic on Second City Chicago mentor Del Close, Myers stepped back to assess the role comedy can play

"Comedy has always been at the forefront of dissent," Myers said. "When Saturday Night Live first started they were just dismantling the anti-war dissent movement. By the time I got there it really wasn't comedy of dissent, it was post-dissent. We're back into dissent again."

"I think a lot of viewers are looking to late-night TV to say, 'Let's laugh about it, it'll be OK,'" he said, noting that most Trump supporters probably aren't tuning in.

Stephen Colbert has been the biggest winner for the late-night talk shows. His audience is up nine percent and he now had the largest total audience, overtaking rival Jimmy Fallon, for the last six weeks running.

"A lot of it has to do with the fact that he goes high and hard at Trump every night from the opening routine, to the monologue to the first segment," Battaglio said.

Fallon's softer approach to Trump has contributed to his ratings declining 17 per cent compared with last year, Battaglio said.

"So clearly the audience is voting, and Colbert's message is the one they want to hear right now," Battaglio said.

Myers starred on Saturday Night Live from 1989 to 1995, bringing to the screen such memorable characters as low-budget TV host Wayne Campbell, Coffee Talk host Linda Richman and Dieter of Sprockets.

He's been on the sidelines for the last few years, choosing to spend time with his growing family, with children aged five, three and one.

When asked how his SNL characters might look on the current show, Myers notes he prefers a softer, gentler approach to politics.

He also cautions that the impact of comedy on political discourse shouldn't be overrated.

"It's beginning a manifesto of resistance that has to be met with actual change."